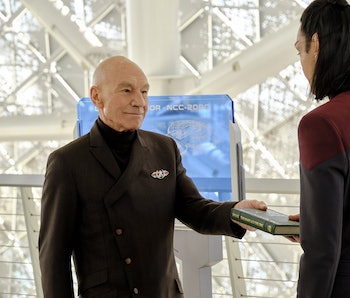 Welcome to the 25th century. From 1987 to today, six different Star Trek shows have taken place in the mid-to-late 24th century, but now, with the launch of Star Trek: Picard Season 2, Trek has taken the era that began with The Next Generation into a new century.

Here’s how the timeline of Picard Season 2 works and why we’re dealing with at least four different time periods throughout the run of this season. Spoilers ahead for Star Trek: Picard Season 2, Episode 1, “The Star Gazer.”

What year is Picard Season 2 set in?

As Laris and Picard discuss, a year and a half have passed since Zhaban has passed away, and the wine label on Jean-Luc’s new vintage is 2401. Because Picard Season 1 occurred in 2399, this makes it seem like Zhaban was dead sometime in 2400, and we’re now in the fall of 2401. Since the episode opens as the wine harvesting season ends, we can conjecture it’s roughly September or October of 2401 because, in real life, wine harvesting in France ends between August and October. Because Laris and Jean-Luc are sitting by a fire outside at Chateau Picard, it feels like fall is a good bet.

So, at the start of the episode, the year is 2401, which is the first time a Star Trek series has taken place within the 25th century, at least within the Prime Universe. In Voyager’s finale, “Endgame,” we saw an alternate future in 2404, though that was decidedly not the future we know now. For one thing, an alternate Admiral Janeway prevented that future from happening, which specifically prevented the demise of Seven of Nine (who is very alive these days).

Either way, other than Discovery’s big jump to the 32nd century, Picard Season 2 edging into the 25th century is a pretty big deal for Trek.

How old is Jean-Luc Picard?

In the first episode of Picard Season 2, we also get flashbacks to Jean-Luc’s childhood, seeing him as a young boy. What year is that? As Guinan jokes later in “The Star Gazer,” Jean-Luc Picard is “pushing a century,” which means he’s almost 100 years old. But exactly how old is he?

According to Trek canon, Jean-Luc Picard is 96 years old at the start of Picard Season 2. This puts him 15 years older than Patrick Stewart is in real life: 81. In Season 1, Jean-Luc was almost “dead” and reborn in a synthetic body at 94 in 2399. Jean-Luc’s birthday is July 13, 2305, so if Picard Season 2 begins in the fall of 2401, Jean-Luc would have recently celebrated his 96th birthday. (Assuming he does celebrate now that he’s got a synthetic body!)

This means that the flashbacks to Jean-Luc Picard as a young boy with his mother (Madeline Wise) probably occur sometime in the 2310s, a period of Star Trek history we know very little about. If we assume young Jean-Luc is about 9 or 10 years old in these flashbacks, we’re looking at the year 2315, give or take.

At the very end of “The Star Gazer,” after Jean-Luc and his allies are seemingly blown-up, he awakens into what can only be the alternate timeline teased in the trailers. This, too, seems to be the year 2401, but it’s vastly different from the one Picard just left. On top of that, the actors, showrunners, and trailers have revealed the crew will eventually travel to 2024, marking the fourth time frame for the series.

To recap, here are all the time periods (so far!) for the action of Picard Season 2:

It’s unclear right now if these timeline-altering shenanigans will permanently change Trek canon or if Jean-Luc and Q will hit a big reset button at the end of the season. Either way, with so much going on in “The Star Gazer” alone, Picard Season 2 is shaping up to be the most complex Trek story yet.