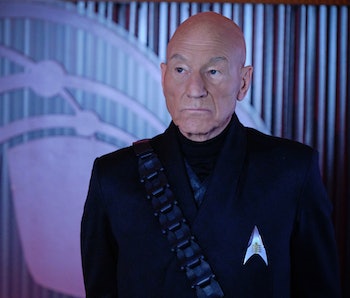 Three live-action Star Trek shows may be airing back-to-back-to-back this year, but each show is canonically separated by several decades. Still, because time travel is super common in the Trek franchise and is central to the premise of Star Trek: Picard Season 2, it’s only fair to wonder if viewers can expect to see some Marvel-Cinematic-Universe-style crossovers between the shows.

Ahead of the launch of Picard Season 2, Inverse briefly spoke with the co-showrunner of both Picard and Strange New Worlds, Akiva Goldsman, about Easter eggs and potential crossovers. Here’s what he had to say. No spoilers ahead.

While Discovery currently takes place in the 32nd century and Strange New Worlds will explore the 23rd century, the second season of Picard takes place smack-dab in the middle and is also a retroactive prequel. Confused? Well, Picard is primarily a sequel to The Next Generation era, which means its first season (including flashbacks) covered the late 24th century. Because Season 1 ended in 2399, it’s a safe bet that Picard Season 2 extends to the beginning of the 25th century, specifically 2401 and beyond.

However, as the trailers have indicated, Picard Season 2 will feature at least one alternate dimension and time travel back to 2024. With so many ways for Picard to be referenced in Strange New Worlds — and vice versa — it seems obvious that these shows could be specifically linked while airing. In fact, the finale of Picard Season 2 will air on the same day, May 5, 2022, as the debut of Strange New Worlds Season 1. With that much Trekkie synergy, a crossover feels almost mandatory.

“You know, I’ll tell you why I’m not,” Goldsman tells Inverse. “It’s because I think with Strange New Worlds, the promise is that it will be episodic, and [it] speaks to things that are complete. If we reach backward in Strange New Worlds, we're doing it on something that is historically established canon. And we’ll do that in a way that the [reference] is a hard enough fact. It would be a reference that’s easy to explain to somebody who doesn't know and delightful to somebody who does.”

Essentially, Goldsman is saying that fans should expect several references to Star Trek: The Original Series in Strange New Worlds because the canon of TOS is a “hard fact” in the history of Trek. But right now, because Picard is still in flux, it probably won’t crossover to Strange New Worlds.

“When Picard is done, then it will be a hard fact,” Goldsman adds. “Because remember, Picard has also moved now into Strange New Worlds’ past.”

This last bit references the fact that by traveling back in time to 2024 in Picard Season 2, the series retroactively becomes a prequel to all of Trek, at least partially. Saying when and how the Picard gang gets themselves back in time would be a spoiler, but again, as the trailers have made clear and as Goldsman mentions, that time travel does happen.

Until then, other than a few verbal references in the future-tense of Discovery, it sounds like a big formal crossover between the different live-action Trek shows isn’t happening just yet.

“Let Picard be done, and then I could see it start to emerge in Strange New Worlds,” Goldsman says. “I think Picard has already emerged in Discovery. So, you know, cross-pollination is always possible in the future.”