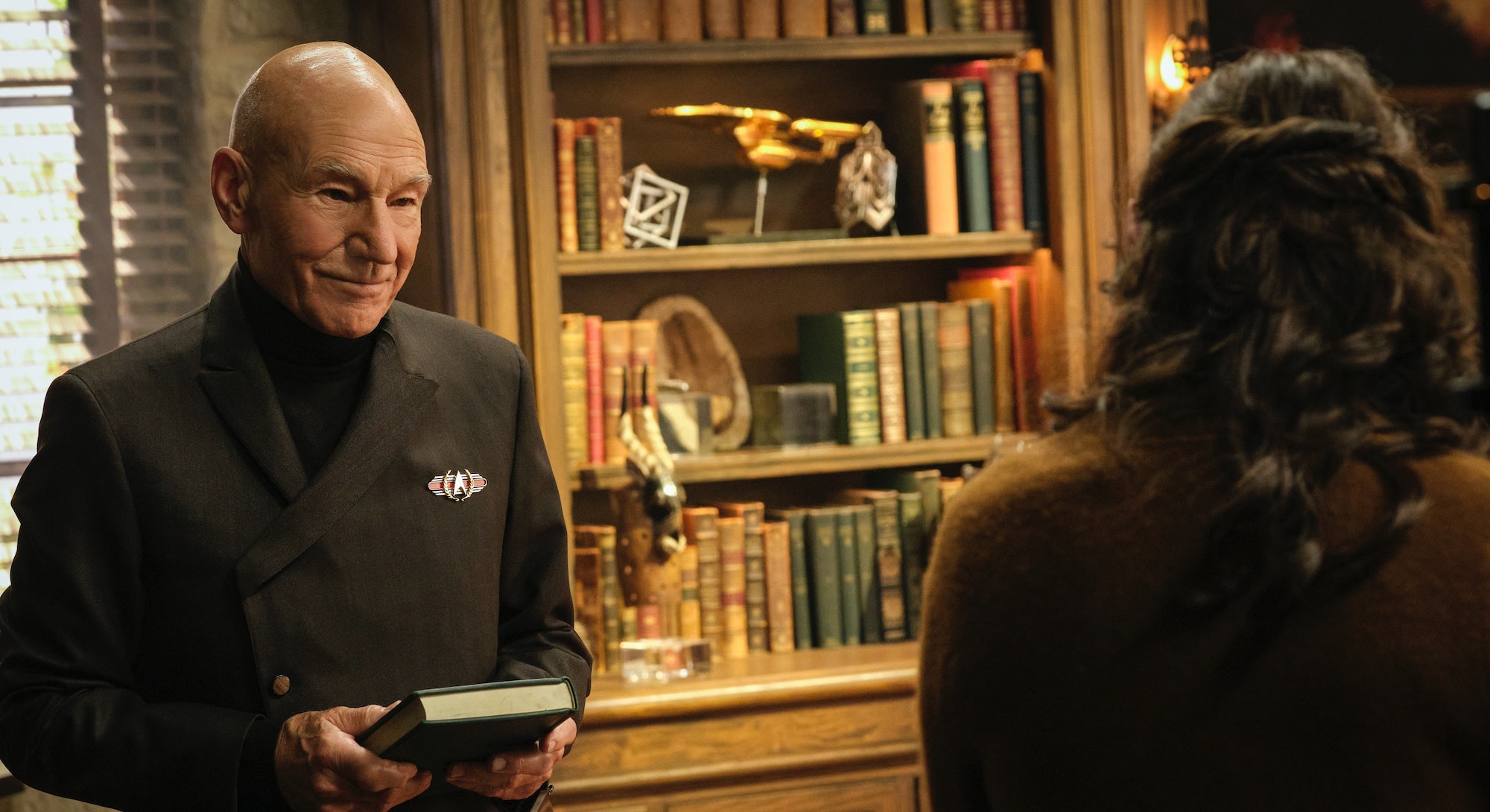 Talking to Patrick Stewart in real life feels like time travel. At 81, he’s ageless and vibrant, young and older simultaneously.

Now, with Picard Season 2 traveling back in time to 2024 to insert Captain Jean-Luc Picard into the backstory of all of Star Trek — and his version of Marvel’s Professor X heavily rumored for Doctor Strange in the Multiverse of Madness — Stewart has arguably never been more relevant in the realm of science fiction.

Patrick Stewart knows things we mortals will never understand, and the twinkle in his eye contains wonders and mysteries. Like a sage in some mythological story, he’s also somewhat inscrutable. He’s the riddling Sphinx or a soothsayer in a Shakespeare play.

From his love of Dune to his thoughts about Professor X, and — of course — the present and future of Star Trek, here’s what we managed to get out of this legend ahead of the launch of Picard Season 2. No spoilers ahead.

Pop culture history tells us there was a point in time when Patrick Stewart wasn’t a legend, but it’s hard to believe. In 1984, Stewart was an actor mostly known for his work on the stage. Then, he starred as Gurney Halleck in David Lynch’s 1984 version of Dune. By 1987, he was playing the part which would make him world-famous, Captain Jean-Luc Picard of the USS Enterprise in Star Trek: The Next Generation. So did one sci-fi franchise lead to another? Did his turn in Dune make Picard possible?

“I have seen the new Dune and I think it’s terrific. It actually made me rather sentimental.”

“I don't think that Dune played a role [in being cast in The Next Generation], although they came very, very close together,” Stewart says. “After Dune I did a stage production of Who's Afraid of Virginia Woolf, the magnificent Edward Albee play. And then, as we were about to transfer Virginia Woolf to the West End stage from the Young Vic, I was offered Star Trek [TNG]. But I have seen the new Dune and I think it’s terrific. It actually made me rather sentimental.”

Stewart seems to know that nostalgia drives much of what audiences love, but not in a cynical way. His “sentimental” feelings for Dune aren’t too different from how he feels about the works of Charles Dickens. When I tell him my own interest in Dickens derived from hearing 1991 cassette tapes of Stewart’s one-man show of A Christmas Carol, he puts his hand over his heart and says, “that’s an important story to me...I'm so glad to hear why you were so interested in talking with me. That's very satisfying.”

Whether it’s Scrooge, Gurney, Jean-Luc, or Charles Xavier, it’s clear a real piece of Stewart lives in these performances. For some actors, the role is a job, but for Stewart, you can tell each role is its own life, lived fully by him.

And yet, some of these characters’ lives have stories that end, while others have stories that seem to go on. Recently, rumors circulated that Picard Season 3 (filming back-to-back with Season 2) would end the series. Meanwhile, in another fictional universe, Stewart’s voice seemed to be heard in the latest trailer for Doctor Strange in the Multiverse of Madness, causing many to assume he has secretly reprised his role as Professor Charles Xavier from the X-Men franchise. If Picard is set to end at Season 3, does that mean Jean-Luc’s story is coming to a close, while, perhaps, the door is being reopened for Charles Xavier, who, we thought had passed away in Logan?

“No,” Stewart says when asked if Picard Season 3 will end Jean-Luc’s story similar to Logan did for Processor X. “Not an endpoint [for Jean-Luc]. No, not in the way that Charles Xavier ended.”

“Not an endpoint [for Jean-Luc]. No, not in the way that Charles Xavier ended.”

This answer is fascinating, mostly because it seems to be the opposite of what you might expect. If Picard isn’t an open-ended series, then perhaps the overall goal is to create closure for Jean-Luc’s story. Meanwhile, if the multiverse in Marvel is getting rowdy, maybe Professor X will have new life.

With me, Stewart is tight-lipped about Professor X (though he always calls the character by his full name, “Charles Xavier”) but in an interview conducted with ComicBook.com, he outright denied having even participated in Multiverse of Madness, writing off his voice in the new trailer as a crafty work of imitation or, an older recording being used out-of-context.

“You know, people have been imitating my voice ever since I came on the stage 60 years ago,” he said. “So, I can't be held responsible for that.”

If you combine that answer with what he told me about the story of Jean-Luc having an endpoint dissimilar from “the way that Charles Xavier ended,” it’s easy to come to the conclusion that Stewart is saying that Professor X is still dead and Jean-Luc Picard will perhaps, never meet his maker — at least not on screen. That’s not exactly what he said, but because this is Patrick Stewart, and he is smarter than all of us, the subtext may matter more than the context.

“All right, if I'm absolutely honest, it may be that I'm just kind of teasing myself with the notion that [Jean-Luc] still has more to say and more to experience,” Stewart tells me, smiling. “We take him so close to transformation in the three seasons of Picard that I'm very, very satisfied with it. But maybe there's more in the future.”

“Maybe there's more in the future.”

Hardcore fans will scrutinize all of this for literalism. Perhaps Stewart does have a role in Multiverse of Madness, but not as Professor X. Or he is playing Professor X, but a version of the character from another universe. Or maybe he’s not in that movie at all.

Perhaps Picard will end after Season 3, but Jean-Luc will continue to appear in another Trek series, set in the same time period. (Something showrunner Terry Matalas has hinted could occur anyway.)

These are all questions that seem straightforward, and yet, when you speak to Stewart, they all feel like the wrong questions. He’s way beyond the logistics of how his characters got to where they are. He’s way more interested in why his characters do what they do and what happens next.

“At the beginning of Season 1 [Jean-Luc] is a retired admiral. And he had admirable and likable and strong people working with [at Chateau Picard.] But it wasn't enough,” Stewart says. “He wants more. He wants more. I found myself absolutely fascinated by that. So, you know, I'll be back.”

When Stewart says “I’ll be back,” you wonder which “I” he’s referring to. Jean-Luc Picard? Who wants more? Picard or Stewart? The answer is not entirely clear, which, of course, is the whole point.