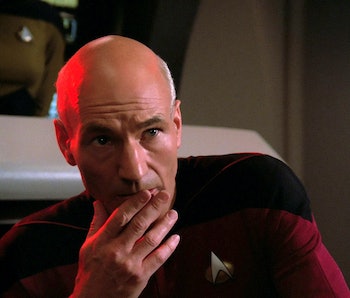 The trial never ends. In Star Trek: Picard Season 2, the all-powerful trickster god known as “Q” (John de Lancie) will once again return to the Trek canon. Long ago, on The Next Generation, Q told Captain Jean-Luc Picard (Patrick Stewart) that the trial of humanity was ongoing, a sentiment he’s reiterated in the trailers for Picard Season 2. So, ahead of the March 3 return of Q vs. Picard, here are five essential TNG episodes to binge.

Is Star Trek still on Netflix?

In 2021 three Star Trek series, The Original Series, Voyager, and Enterprise, all left Netflix for Paramount+. But, at least for now, The Next Generation and Deep Space Nine are both still on Netflix. Sources think these two series could leave Netflix as early as February 2022, so enjoy them while you can.

In the very first episode of The Next Generation, the crew of the USS Enterprise-D were challenged by the all-powerful Q, who claimed that humanity was a “savage, child race.” Picard and the crew were then perpetually on trial for the crimes of all of humanity. The concept of Q — a mercurial space deity — was a late addition to the script. Some early TNG writers, like David Gerrold and Dorothy Fontana (co-writer of “Encounter at Farpoint”) felt Q was too similar to another flippant space god from The Original Series named Trelane.

However, the idea of Q as the ultimate adversary for Picard came from Star Trek creator Gene Roddenberry. And, because Q is back for the new season of Picard, it’s clear his gamble paid off. Watch this one to figure out what Q’s whole deal was, and how Picard briefly won him over.

The Season 2 trailer for Picard also reintroduced the fan favorite character of Guinan, famously played by Whoopi Goldberg. In The Next Generation, Guinan joined the crew during the show’s second season. Midway through that season, Q returned and forced the Enterprise to meet the Borg for the first time.

This episode also established that Q and Guinan had a history together, implying Guinan’s powers were far greater than she had let-on. Season 2 of Picard will bring back the Borg (and the Borg Queen), Q, and Guinan. But all of that starts right here with TNG’s “Q, Who.”

Picard Season 2 will find us returning, somehow, to Jean-Luc Picard’s chateau in France. The trailers also imply that some important event in Picard’s past occurred on the family chateau, and that event could have history-altering implications.

But when did we first learn that Jean-Luc Picard’s family owned a French vineyard? In the TNG episode “Family,” right after Picard was rescued from the Borg, we met his grumpy older brother, as well as his sister-in-law and nephew. All of Jean-Luc’s family angst was established in this episode.

Picard Season 2 also features the return of Brent Spiner, most famous for playing the android Data in The Next Generation. Spiner revealed last year that he’ll be playing yet another new character in the Soong family, the human clan that eventually produced Data’s creator, Noonien Soong.

In the Picard Season 2 trailers, Spiner plays a Soong ancestor living in 2024, which makes him the oldest member of the Soong family we’ve seen so far. But Data’s entire family tree was first established in The Next Generation, and the episode that showed us the most was “Brothers.” In this episode, Spiner played Data, his twin “brother” Lore, and his “father,” Dr. Noonien Song. It’s a classic, and essential to understanding the Soong family dynamics.

A slightly underrated TNG classic, you can just call this one “Sliding Doors Trek.” Q appears to Picard and shows him a glimpse of what his life would look like if he’d made a very different choice in his youth. One of the greatest TNG morality plays, this one ends with Q helping Picard make the right decision, indicating that Q isn’t evil and, in fact, is even fond of Jean-Luc.

Star Trek: The Next Generation is streaming on Netflix... for now.