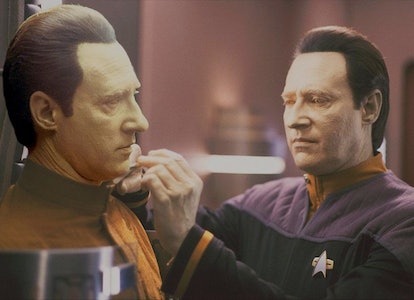 Data is still dead. For those who think that Brent Spiner’s return to Star Trek: Picard Season 2 means that the beloved android will be brought back to life — think again.

While in conversation with Inverse about his hilarious new book Fan Fiction, Spiner teased one amazing new detail about who he’s playing this time around. It’s not a spoiler, but this detail does rule out several possibilities, and also, will certainly leave Trek fans with even more questions.

Speaking to Inverse about his new book, his thoughts on fandom, and his love of old comedies, Brent Spiner also revealed a huge twist for Picard Season 2. Although he played a hitherto unknown secret human brother of Data in Season 1 — Altan Soong — Spiner says he’s not returning to play that character in Season 2. In fact, he’s not playing any character that he’s ever played before. It’s not Lore. It’s not B-4. It’s certainly not Data.

“I can tell you I’m not Data,” Spiner says firmly, explaining at the time of the interview that he would wrap filming of Picard Season 2 on September 2, 2021. “I know they haven’t revealed much about me being in the show. I can tell you I’m a member of the Soong family. And, that I’m not playing a character I’ve ever played before.”

Who is Brent Spiner playing in Picard Season 2?

The Soong family refers to Data’s human creator, Dr. Noonien Soong, his 22nd-century ancestor Arik Soong, Data’s android brothers — both Lore and B-4 — as well as the aforementioned Altan, the biological son of Noonien.

To date, all these characters have been played by Brent Spiner, across various episodes of The Next Generation, the film Nemesis, Picard, and even Star Trek: Enterprise. So, if Spiner is now playing another member of the Soong family in Picard Season 2, what could that possibly mean?

It seems that there are three options:

Interestingly, when Brent Spiner guest-starred on Star Trek: Enterprise in 2005, his character, Arik Soong, was basically a villain, who was trying to help the Augments (Khan’s buddies) gain dominance over the Federation in the 22nd Century.

Picard Season 2 is presenting some kind of alternate “present” in which the Federation is oppressive and seemingly ruled by dictators. Coincidence? Probably!

At this point, we don’t really know what this means yet. All we do know is that whatever Spiner’s new Trek role ends up being, it will certainly be — as Data would say — intriguing.

More like this
Culture
Jan. 25, 2023
30 years later, Star Trek is about to pay off a massive villain comeback
By Ryan Britt
Culture
Jan. 18, 2023
The Mandalorian Season 3 will finally solve a huge Star Wars mystery
By Ryan Britt
Entertainment
Jan. 22, 2023
The Last of Us Episode 2 trailer teases a big reveal
By Claire Fox
Related Tags
Share: