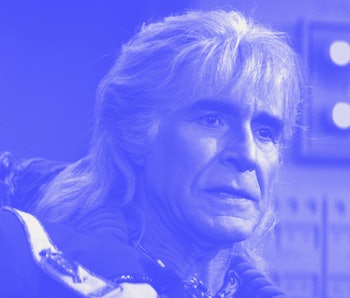 Everyone is on a first-name basis with Khan.

In The Wrath of Khan, when Kirk loses it over getting stranded inside of Regula I, he screams, “Khaaaaaaan!”

Notice, he doesn’t scream “Singgggggh!” Khan calls James T. Kirk by his last name, but Kirk calls Khan by his first name. In The Original Series episode “Space Seed,” that’s how Khan wanted it. But now, a new addition to the cast of Strange New Worlds is reminding everyone of Khan’s full name.

Christina Chong is playing La’an Noonein-Singh. Is she related to Khan? And if so, will Strange New Worlds totally break the old-school Trek canon? Wild speculation ahead.

In The Original Series episode “Space Seed,” the Enterprise finds Khan in suspended animation on the sleeper ship SS Botany Bay. When awakened, Khan insists his first name is just “Khan.” But, after some digging in the library computer, Spock finally realizes that Khan is actually Khan Noonein Singh, an exiled dictator who left Earth sometime in the late 1990s.

Because TOS was made in the ‘60s, the future history of Trek canon has always been slightly silly. Obviously, we didn’t end up having a Eugenics War in the 1990s, nor does it seem like Vulcans will be making contact with us four decades from now in 2063. Although this never actually made official canon, author Greg Cox did pen a series of novels called The Rise and Fall of Khan Noonien Singh, which retconned Khan’s period of dictatorship as something that mostly happened in secret.

In this slightly modified canon, the Eugenics Wars still happened in the 1990s, but the general public in North America was unaware of it because it was mostly a secret war fought by shadow agents. In 2014, IDW comics attempted a similar backstory retcon with a miniseries just called Star Trek: Khan, which reconciled Khan’s changed appearance as Benedict Cumberbatch in the film Into Darkness and retold his origins in the Prime timeline. Like the Cox books, this series, written by Mike Johnson, also posited that Khan did gain a huge following in the 1990s — and mixed that concept with real ‘90s history, too.

The exact period of time that Khan ruled on Earth is also confusing. In “Space Seed,” Khan says he has been asleep for “200 years,” but the number should be closer to 300. Canonically, TOS takes place in the 2260s, making the 1990s almost 300 years, not 200. But at the time “Space Seed” was written, it hadn’t been decided exactly when Star Trek took place in the future.

In fact, as late as 1980, an officially licensed book called Star Trek: Spaceflight Chronology put Kirk’s five-year mission between the years 2207 and 2212, mostly to account for Khan’s assertion that he’d been asleep for roughly 200 years. Even in The Wrath of Khan (released in 1982, set in 2285), Khan waxes poetic about how he was “a prince” on Earth “200 years ago.” Again, it should be close to 300.

The bottom line is that Khan’s backstory is wonky, partially because of writing inconsistencies and because his backstory was purposefully obscured. Spock had a hard time sorting out the records from Khan’s time, which is helpful with a retcon. If Strange New Worlds dips too close to altering canon, we can always remember that it took Spock at least a full day to figure out who Khan really was.

The prequel series Enterprise also retconned Khan’s origins. In all versions of canon, Khan is a genetically engineered “superhuman,” which was later retconned with the term “Augment.” Along with various other genetically “superior” subjects, Khan tries to take over everything in the 1990s.

In Enterprise (set in the 2150s, a century before TOS), we met a rogue geneticist named Arik Soong (played by Brent Spiner), who tried to revive the eugenics programs from the 1990s by hijacking Augment embryos. Basically, he ended up releasing a bunch of Khan’s contemporaries into the 22nd century.

Soong and these Augments are stopped, mostly. But they impacted canon in two ways: The Augments were the source of a genetic virus picked up by the Klingons, which later resulted in a bunch of Klingons with smooth foreheads. (Another retcon!) Enterprise also established that Arik Soong was the ancestor of Dr. Noonien Soong, who created the android Data. The head-canon dot-connecting implied by Enterprise is that the name “Noonien” came from Khan but was given to others in the Augment community. This is why Data’s father’s first name happened to be part of Khan’s middle name. Or maybe Khan’s last name. It all depends on that hyphen.

The presence of Christina Chong’s character with the last name “Noonein-Singh” can’t be an accident. The showrunners of Strange New Worlds are way too steeped in TOS and Trek movie canon to have done that by accident. La’an Noonein-Singh has to be linked to Khan and the Augments in some way, shape, or form.

While it’s tempting to say La’an is Khan’s daughter, that makes zero sense in the timeline. Strange New Worlds occurs before the events of “Space Seed” (and well before The Wrath of Khan). Khan won’t even be “discovered” by Starfleet for another seven years or so.

But La’an could be descended from Khan, either by birth or cloning or some other kind of genetic replication. It’s also possible she’s not related to Khan at all and yet has ties to the Augments. As far as canon goes, Khan’s name is “Khan Noonein Singh,” which lacks the hyphen in La’an’s last name. This could be significant, or it could not be. Perhaps the best theory here is La’an is somewhat related to the Augments and inherited a name common among that group of people. Therefore, it’s possible La’an may not even be an Augment herself but could be part of their extended “family.”

If La’an is revealed to be connected to Khan, this would have an interesting ripple effect throughout Star Trek canon. As late as Deep Space Nine (2370s), the idea of genetic engineering is treated with utter disdain in the Federation, so much so that Dr. Bashir has to hide the fact that his parents illegally augmented him in the episode, “Dr. Bashir, I Presume?” In that episode, Starfleet Command evokes the name “Khan Singh” as the worst example of what happens when humans undergo this kind of augmentation.

If La’an is connected to that complicated history, there’s a good bet she’s hiding a secret. And if that secret gets out, it could change everything we think we know about Khan, his wrath, and what Star Trek is really saying about the speculative ethics of future genetic engineering.

La’an looks like a member of the Enterprise crew, so in theory, she’s not going to try to take over the ship like Khan. Or will she?