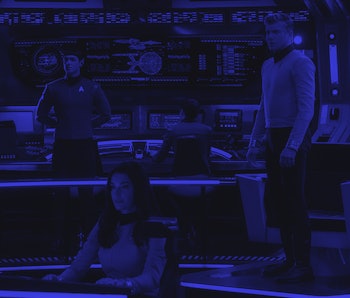 Long before the Marvel Cinematic Universe, there was another massive shared universe: Star Trek. In the 1990s, Trek spanned four different TV series and five feature films across a total of 18 years.

These days, the franchise is bigger than ever. But in a very specific way, Star Trek is sticking to some old rules about how to shape a shared universe — rules that are decidedly in the opposite direction of the Marvel Cinematic Universe protocol.

In February 2021, in a comprehensive announcement about the state of Star Trek production, Alex Kurtzman told Variety that although there is an "interconnectedness" inherent to the Star Trek franchise, that there isn't any reason to believe that the various shows will culminate in a larger story like the CW's Crisis on Infinite Earths or a group of Starfleet-esque Avengers in some big crossover event.

"That’s a lot of fun," Kurtzman said. "But our goal is not to make it so insular that if you haven’t seen the show you’re lost when you watch another show."

In its earliest forms, part of the reason that Star Trek endured is that its individual episodes were self-contained. Although this is often now viewed as an old-fashioned way to do TV, part of why the Star Trek phenomenon was successful in syndication — both in the seventies and the nineties — was because multipart episodes were rare.

Despite its reputation for having a complex canon, the coziness of The Next Generation or The Original Series is actually connected to its ability to bring in the so-called "filthy casuals." With Deep Space Nine, the Trek franchise started to pioneer longer and more complex story arcs, which certainly paved the way for other excellent sci-fi shows like the Battlestar Galatica reboot — no surprise there, as it was largely created by Ronald D. Moore, a producer on both TNG and DS9.

When Discovery debuted in 2017 and decided to present Trek as a serialized-type of sci-fi series, the comparisons to BSG were immediate. Could the style of Trek really work in this new age of TV? Was it right that all the episodes just didn't drop at once? Recently, there's been a lot of talk about how Disney+ brought-back "regular" weekly TV watching with The Mandalorian and WandaVision, but Discovery brought back weekly Star Trek right smack in the middle of an era where the Netflix-binge-model was prevalent. Yes, by doing more serialized storytelling, Discovery made Trek competitive with contemporary TV. And yet, there's still something old-fashioned about the way the episodes are structured. In fact, in Discovery Season 3, the show moved toward a slightly more episodic format, insofar as some of the early stories were somewhat self-contained, and were reminiscent of the old-school "planet of the week" approach of TOS, TNG, Voyager, and Enterprise.

"Discovery has that sort of serialized-season-long story baked into its DNA," showrunner Michelle Paradise told Inverse about the deliberate change in storytelling. "We also wanted to give the show more of an episodic feel in Season 3, and we knew that going in. We got to explore a story of the week or a villain of the week. It gives us time to explore some of our characters who we normally wouldn’t have time to explore. That was definitely a choice on our part and will continue on our show."

The highly anticipated Strange New Worlds will only continue to move the Trek needle further away from season-long storytelling. Since the show was announced, it was also made clear that it will approach the Star Trek format from an "episodic" standpoint. SNW showrunner Akiva Goldsman has gone on record about this: "We can really tell closed-ended stories. We can find ourselves in episodes that are tonally of a piece."

This isn't to say that some kind of serialization will ever be absent from the "new" 21st Century Trek franchise. Even TOS wasn't an anthology show. But, if the throwback episodic nature of Strange New Worlds is a synecdoche for the rest of the franchise, then Kurtzman's comments about trying not to make Trek "insular" suddenly feel radical.

Predictions for what will happen in a future season or spin-off movie of WandaVision or The Mandalorian are fun. But, playing the game of talking about what happens after a show is over has become the prevailing way most popular sci-fi and fantasy shows are discussed. The potential for Star Trek in the next five years or so is to undo some of those tendencies and keep our conversations focused on the story in front of us, not the one (hypothetically) ahead.

Star Trek has stayed popular because of its rewatchability. Even if you know Spock dies in The Wrath of Khan or if Picard gets turned into a Borg in "The Best of Both Worlds," those so-called spoilers hardly matter. Self-contained stories that are accessible are how narrative art endures and lasts over decades and decades. In a few years, Marvel fans will be over what mysteries are lurking around in WandaVision or the rest of "Phase 4." Arrowverse fans are already over the stunt of Crisis on Infinite Earths. The promise of complex crossovers can create great storytelling, but the storytelling has to come first.

If any sci-fi franchise can move geek culture back to caring about close-ended stories, and less concerned about an episode or season that hasn't even been made, it's Star Trek. This franchise has existed for more than 50 years. For better or worse, the sci-fi TV universe still orbits around it. If Trek goes back to episodic storytelling, and it works? Expect the rest of the galaxy to follow.