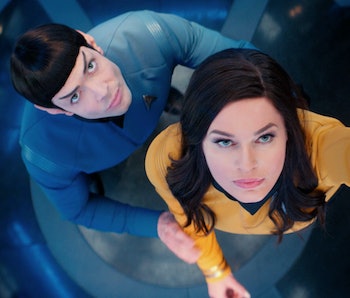 The Star Trek franchise is about to turn a milestone into a yearly tradition. In 2020, three different seasons from three separate Trek series all aired; a first for the venerable sci-fi franchise. In 2021, many Trekkies were expecting subspace radio silence, at least for a little while. After such a huge 2020 —and a global pandemic — Star Trek was going to take some shore leave, right?

Think again. During an investors' day press conference, Star Trek boss Alex Kurtzman confirmed details about Star Trek: Prodigy, and the impending releases Lower Decks Season 2 and Discovery Season 4 — and maybe Strange New Worlds too! Here's how Trek is going to keep making it so in 2021.

None of the main characters in the next big Star Trek series will be human. The first image released for Star Trek: Prodigy reveals that the ragtag youngsters who star as the new crew of a commandeered starship are all aliens. As previously reported, the series will also feature the return of Kate Mulgrew as Captain Janeway.

Although it was initially revealed that Prodigy would debut on Nickelodeon, the kid-focused show will now air on Paramount+ before hitting Nick. And as of next week, CBS All Access will become Paramount+ meaning all the Star Trek TV series will be streaming in the same place for the foreseeable future.

According to a Variety article about the recent Paramount investors' call, Season 4 of Star Trek: Discovery is expected to hit Paramount+ this year. In writing about the streaming debut of Prodigy, Variety also noted:

"The move is part of a wider official strategy of placing every current and former “Trek” TV series on Paramount Plus, including new seasons of Star Trek: Discovery and Star Trek: Lower Decks which are also set to premiere in 2021."

This detail about Lower Decks Season 2 and DISCO Season 4 hitting this year makes sense. Discovery Season 4 was in production back in November 2020, when Season 3 had just started airing. When Inverse spoke with series stars like Doug Jones and Mary Wiseman about Season 3 in 2020, they all confirmed that they were already filming Season 4.

Although Kurtzman and Paramount+ programming chief Julie McNamara confirmed that there are five different Trek shows in production — Picard Season 2, Discovery Season 4, Strange New Worlds Season 1, Lower Decks Season 2, and Prodigy Season 1 — they did not reveal if Michelle Yeoh Section 31 spin-off show was in pre-production, or when fans should expect to see it.

According to Variety, "they emphasized that the current five-series slate will likely not expand further until at least one of the shows runs its course."

Right now, this could imply that Section 31 won't come out until Discovery or Picard (or Lower Decks?) stops releasing new seasons. But at the same time Variety noted there are "conversations" about Section 31.

Although the interview in Variety doesn't confirm this, the new video (watch above) narrated by Alex Kurtzman strongly implies that Strange New Worlds is coming out very soon. Could it also hit Paramount+ in 2021? If so, that's four new Trek shows in 2021, yet another bold new record.

The next new Trek show is Star Trek: Prodigy, coming to Paramount+ in 2021.

More like this
Culture
Jan. 25, 2023
30 years later, Star Trek is about to pay off a massive villain comeback
By Ryan Britt
Culture
Jan. 18, 2023
Your science fiction education begins with Babylon 5
By Ryan Britt
Entertainment
Jan. 22, 2023
The Last of Us Episode 2 trailer teases a big reveal
By Claire Fox
LEARN SOMETHING NEW EVERY DAY.
Related Tags
Share: