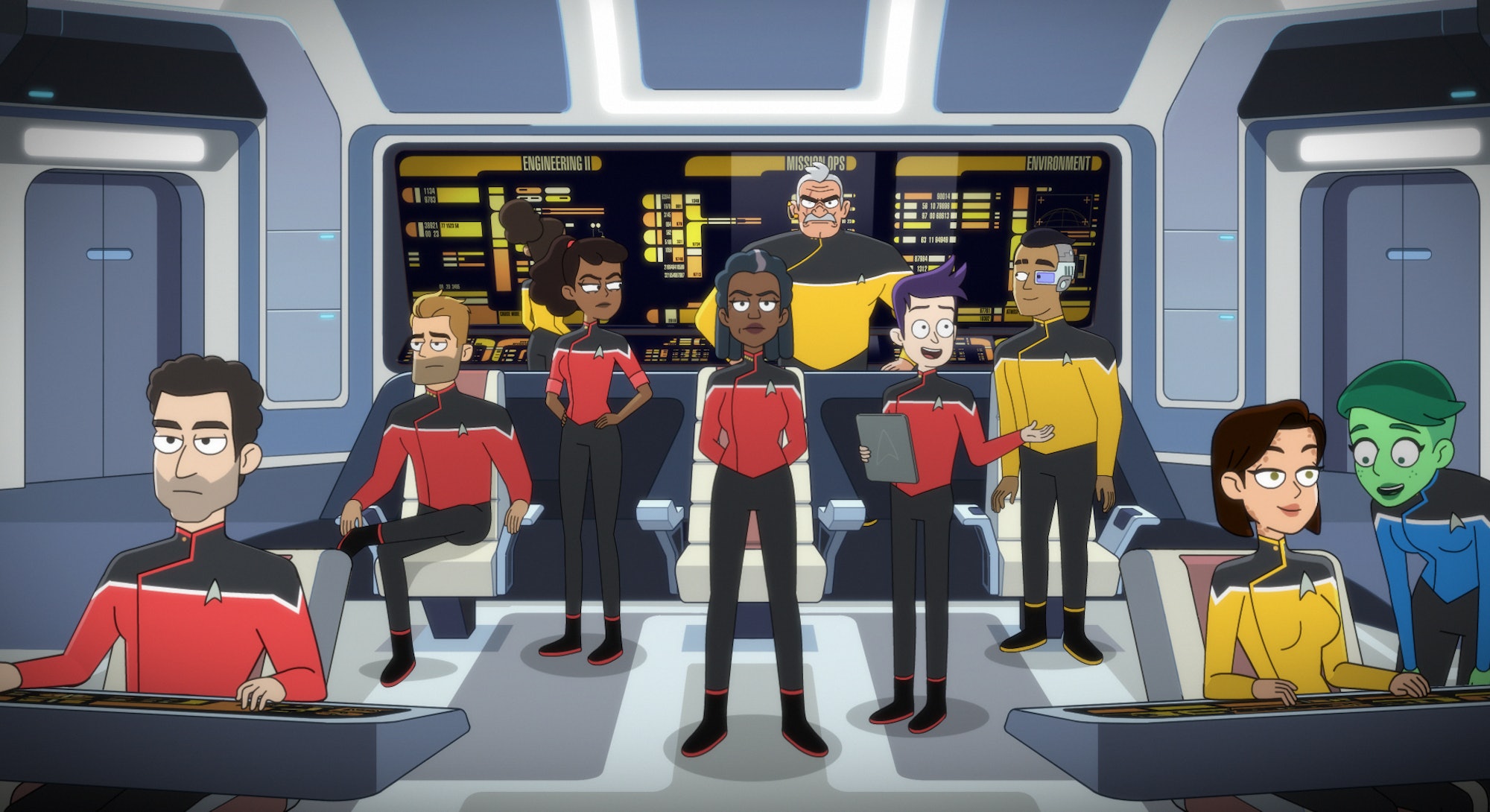 Up until 2020, if you called the entirety of the Star Trek franchise a series of nerdy inside jokes, someone would rightly point out that its political and social relevance goes far beyond just popcorn entertainment.

Despite an undeserved reputation for stodginess, Star Trek has used humor to set itself apart from other science fiction since it began. Just watch an episode of The Outer Limits from the '60s and then watch a random episode of The Original Series, and you'll see the difference. In fact, finding an episode of TOS that doesn't end on a joke can be a challenge, even for diehard fans. So maybe Star Trek is a long-running joke. Or, as the Bee Gees might put it, maybe Captain Kirk started a joke that set the whole world laughing, and later, crying a little bit, too.

But how do you make Star Trek funny without pissing off a bunch of Trekkies? As Lower Decks celebrates its triumphant Season 1 finale, showrunner Mike McMahan explains the secret Lower Decker cocktail.

Lower Decks' Season 1 finale is notable for being both moving as it is hilarious. We get a tearful mother-daughter reconciliation, the death of a beloved officer, and the bittersweet realization that one character doesn't remember anything about their best friends. If you'd read that synopsis about another Star Trek show's season finale it probably would have scanned as serious. Earlier in the season, when Mariner says "Ugh, Earth is so boring!" it's funny, even if you don't understand the deeper-Trekkie-cut she's making about the murky depiction of Earth in Star Trek's rosy future.

"I feel like I could do a whole Star Trek show set on Earth," Mike McMahan tells Inverse. "If this is a Starfleet ship, what is Earth like? It’s always kind of been nebulous."

Because of his writing on Rick and Morty and Solar Opposites, it's easy to peg McMahan as a writer who specializes in offbeat sci-fi, but what makes the narrative of Lower Decks tick is that it's deeply in love with Star Trek while also floating a mild revision of the canon.

"One Star Trek trope I don’t really like is that an alien represents all the aliens from an entire planet," McMahan says. "I think Star Trek does a good job of being like, 'Humans are all different and textured and interesting.' But they don’t do a good job of saying that about Klingons or Orions or different aliens. They all have this kind of broad metaphorical representation of an idea. With characters like Tendi in Lower Decks, we’re slowly trying to unpeel that a little bit."

Even though it's an animated series, Lower Decks has the unique distinction of being the Star Trek show that's the most concerned with realism, with characters McMahan describes as "not on the top of their game." This means that Mariner, Tendi, Rutherford, and Boimler are more like the audience than the senior bridge crew. It's no coincidence that the show's namesake is a Next Generation episode focused on the day-to-day lives of the lower-ranking officers who do all the dirty work.

Lower Decks has embraced this idea, but McMahan says the show is also "playing the hits," with dozens and dozen of shout-outs to Star Trek that has come before. The Lower Deckers themselves come across as huge fans of Star Trek, even though they live inside of Star Trek. So how does that work?

"People in Star Trek watch Star Trek," McMahan says. His proof is the 2005 episode of Enterprise in which Riker participates in a holographic recreation of an Enterprise adventure that would have occurred 200 years before he was born. "So, that was a big deal for me. It was very helpful."

In "No Small Parts," the Lower Decks Season 1 finale, Riker jokes about returning to the holodeck and watching "the first Enterprise, you know, Archer and those guys." It's partly an apology to fans — Jonathan Frakes has expressed his regret about butting in on the Enterprise finale and still considers it an "unpleasant memory."

Since McMahan claims "These Are the Voyages..." inspired him for Lower Decks, this joke has a more interesting extra-fictional meaning. If Riker watched a version of a "Star Trek episode" inside of Star Trek, how many more episodes have been retold in various ways?

"If you’re in Starfleet, and all this stuff has happened, it would be like if you were in the military now, and you were reading about — or hearing about – [real events] either officially or word of mouth through people who have been on ships, or people catching up. There are so many people on these ships, of course they’re going to talk to each other. They’re going to take real life events and put those into media. I think what I’m trying to say is there is no one unifying theory of communication. To me, it’s more that there’s going to be mosaic of communication. There’s things that are going to be popularized. There’s things in the news. There’s things you’ll learn at Starfleet academy there’s going to be stuff you’ll hear rumors about. It’s out there and it’s going to be known."

For example, here's McMahan's breakdown of a single irreverent moment in Lower Decks, and what it says about the broader canon:

"You’ll even hear our Lower Deckers refer to events in the past and it’s like by the episode titles of previous Star Trek shows. Like 'Rascals.' One guy says, 'I’m half a Rascal.' Has he seen [the TNG episode] 'Rascals?' And the answer is, there’s probably a popular log that’s gone around titled 'Rascals,' which is somebody’s memory of the events of that episode. So what ends up happening, by letting our Lower Deckers be geeks for Star Trek, it lets the show be geeks for Star Trek and it gets to put in the canon. Which means Lower Decks ends up becoming the Rosetta Stone of all the different Star Trek properties, including the Kelvin movies and everything can be unified through Lower Decks."

Basically, McMahan's view of the Trek canon is an optimistic and open-minded fan's point-of-view. Instead of nitpicking and pointing out where things don't match up or make sense, McMahan wants to talk through those inconsistencies until they feel consistent. Failing that you might as well make a joke.

"Even in TNG, the uniforms change, every year," McMahan says. "The real-world answer [for the changes] is, the costumers got better and the uniforms got better-looking. But there are really great ways in-universe to discuss that. So, if I get a few more seasons on this, that will be something, because I really want to do an episode where they’re testing new uniforms on Boimler."

McMahan isn't trying to wave his hand and make the debate over Starfleet uniforms go away. He's thought about this more than perhaps any Trekkie on the planet.

"I get people tweeting at me, 'Uh, I wish the Star Trek writers new about scarcity,' and I’m like, I wish you knew that just because there is stuff, that doesn’t mean everybody gets it. I mean, even people with 3D printers have to look up the code! And not every ship gets the new stuff. I’m very fascinated with the idea that we have replicators [in Star Trek] that can make anything. But who’s designing that stuff? It becomes like intellectual items, like why aren’t they all eating Lincoln’s last meal? The more you look at it, some ships would have different stuff, which is why you’d want to get the thing with the purple stripe on it, which goes all the way down to uniforms. I mean why is Starfleet even in uniforms? It’s not to make them camouflaged and they’re not strictly military. It’s representational of who Starfleet is."

We don't know yet what will happen in Lower Decks Season 2, but the show won't shy away from its connection to the TNG-film era. McMahan says he also isn't worried about bumping into any of the canon from Picard, least of all the different uniforms. "Those uniforms won’t trickle down to our level of guys for years. It’s a big fleet."

He also thinks that the concept of Lower Decks could exist in another timeline altogether. When asked if he could imagine Lower Decks: TOS edition, McMahan answers yes.

"Absolutely. You can do Lower Decks on a bunch of other ships and other eras," he says firmly. "The reason all the shows work together under the same banner is that Starfleet is huge. There are a million stories out there. We just have to figure out how to tell them."