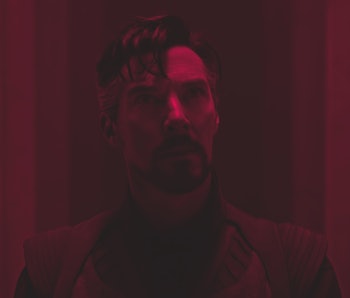 The second trailer for Doctor Strange in the Multiverse of Madness includes several startling moments, but none more shocking than its reveal that an Illuminati-inspired team will appear in the film.

The moment in question sees Stephen Strange (Benedict Cumberbatch) forced to stand in handcuffs in front of a lineup of characters that the trailer suggests includes Professor X (Patrick Stewart). However, while the trailer’s Illuminati tease does resolve some of the film’s ongoing mysteries, it also raises several new questions about the Illuminati’s role in Multiverse of Madness. And just who will be in the team’s lineup?

The trailer heavily implies that both Charles Xavier and Baron Mordo (Chiwetel Ejiofor) will be members of the film’s Illuminati, but who else will show up to judge Cumberbatch’s Doctor Strange for his so-called “desecration of reality”?

When rumors first began swirling last year that Doctor Strange in the Multiverse of Madness would introduce a MCU version of the Illuminati, the group’s lineup was initially rumored to include Professor X, Captain Carter (Hayley Atwell), Balder the Brave, Monica Rambeau (Teyonah Parris), and Baron Mordo. That lineup still works based on what we’ve seen from Multiverse of Madness, and Professor X and Baron Mordo’s roles have already been confirmed.

Although no footage of Hayley Atwell in Multiverse of Madness has been released yet, Captain Carter’s shield can be seen on the film’s poster, which seems to confirm that a version of the What If…? character will be in the Doctor Strange sequel. Additionally, the film’s latest trailer includes three very brief shots of what looks to be a Captain Marvel-esque figure attacking Wanda Maximoff (Elizabeth Olsen). While it’s impossible to know the character’s identity right now, the mystery hero could turn out to be Maria Rambeau (Lashana Lynch), an alternate reality Captain Marvel.

Some Marvel fans also believe the film will introduce Illuminati versions of Tony Stark and Reed Richards played by Tom Cruise and John Krasinski. This week, the internet was also hit with a rumor stating that Inhumans star Anson Mount will be reprising his role as Black Bolt, who’s a key member of the Illuminati in the comics.

Taking all these rumors and leaks into account, it’s worth asking which characters are most likely to appear as Illuminati members in Doctor Strange in the Multiverse of Madness.

Who will actually be in the Illuminati?

During the Illuminati sequence in the latest Multiverse of Madness trailer, Doctor Strange is shown walking into a room where at least five chairs have been assembled on a raised platform. Strange’s body blocks a portion of the platform, which means there’s likely a total of six or seven Illuminati members in Multiverse of Madness.

Based on the trailer it seems safe to say that both Baron Mordo and Professor X will fill two of those seats, which means there are four or five other Illuminati members that Marvel still hasn’t revealed.

We bet, based on both previous rumors and her shield’s presence on the film’s poster, that Captain Carter will be another member of the Illuminati. The same goes for whoever the glowing superhero is in the latest trailer, whether it be Tom Cruise’s Iron Man or Lashana Lynch’s Maria Rambeau. We remain highly skeptical of the idea that Tom Cruise will appear, so it seems more likely that the hero in question will end up being Rambeau.

That leaves us with two or three empty seats. Assuming the new online reports are true, one could belong to Anson Mount’s Black Bolt, which would make many comic book readers and Inhumans fans happy.

@ViewerAnon, who tweeted out the original Illuminati rumor last year, recently posted that he’s heard actor Bruce Campbell will play another member of the Illuminati. Campbell is a frequent collaborator of Multiverse of Madness director Sam Raimi, so it certainly seems possible that he’ll appear. Most fans seem to believe Campbell will play Balder the Brave, which would make him the team’s sixth member.

If there are seven members of the team, the final seat could be filled by Reed Richards, a variant of Stephen Strange, or practically any other Marvel Comics character.

The Inverse Analysis — The leading consensus among fans is that the most likely members of the Illuminati in Multiverse of Madness are Professor X, Baron Mordo, Captain Carter, and whoever the film’s Captain Marvel-esque hero is. Characters like Black Bolt and Balder the Brave, while not locks, are still considered likely members of the multiversal team, but we won’t know for sure until Multiverse of Madness is released.

Marvel’s willingness to confirm the presence of both the Illuminati and Patrick Stewart’s Professor X several months ahead of the film’s theatrical release suggests that those two surprises aren’t the biggest that the Doctor Strange sequel has to offer. The film’s version of the Illuminati may turn out to be even more powerful (and surprising) than fans think.