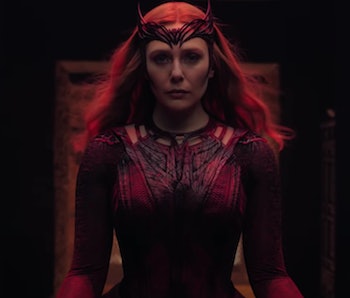 The first two trailers for Doctor Strange in the Multiverse of Madness may contain even more secrets than fans realize. The highly anticipated Marvel Cinematic Universe film isn’t set to hit theaters until May, but its early marketing materials have already given fans plenty to chew on, from its debut teaser’s confirmation that it’ll feature a dark Doctor Strange variant to its latest trailer’s enticing Illuminati hints.

The film’s exploration of alternate realities and MCU variants also raises the possibility that certain characters and places in the first two Multiverse of Madness trailers may not be the versions that fans already know. In fact, the film’s trailers may have already shown a new MCU variant without fans realizing it.

Looking for Help in the Multiverse — In both the first and second trailers for Doctor Strange in the Multiverse of Madness, Stephen Strange (Benedict Cumberbatch) is shown seeking out Wanda Maximoff (Elizabeth Olsen) to ask for help. The scene takes place in an orchard, and Wanda doesn’t act like the villainous version of herself who can be seen wearing her Scarlet Witch headpiece in the film’s latest trailer.

While it’s possible Wanda is putting on a front during her conversation with Strange, it’s also possible that the version of Wanda featured in the scene isn’t the one fans have come to know and love. What if she’s a variant of Wanda from a different universe, one that Stephen seeks out after the Wanda from the MCU’s prime reality begins to wreak havoc throughout the multiverse?

A Tale of Two Wandas — One of the most interesting things about Multiverse of Madness is that there’s no way of knowing for sure which of the characters in the trailers are variants. A variant of Stephen Strange may look exactly like the one from the MCU’s prime reality, and that means it’s impossible to know which trailer scenes feature the version of Strange we’ve come to know since 2016 and which ones don’t.

The same goes for Elizabeth Olsen’s Wanda Maximoff. In fact, the latest Multiverse of Madness trailer features a brief scene in which two identical versions of Wanda come face-to-face, with one dressed in normal clothing and the other wearing her iconic Scarlet Witch costume. That means Multiverse of Madness will feature at least one variant of Wanda from another universe.

Taking that into account, it’s possible the “good” Wanda we see speaking with Strange about the multiverse isn’t the same Wanda fans know. If so, that would mean Marvel has been hiding one of Multiverse of Madness’ biggest variants in plain sight for the past two months, which seems like the kind of cheeky marketing trick the studio would love to pull off.

The Inverse Analysis — Marvel has made it clear that it’s not holding back with Doctor Strange in the Multiverse of Madness. The film’s early trailers have all emphasized the fact that its multiverse-centric premise will introduce MCU fans to worlds and characters they likely never thought they’d get to see in a Doctor Strange sequel, whether it be Professor X (Patrick Stewart) or Captain Carter (Hayley Atwell).

The second trailer for Multiverse of Madness also hints that the film will follow through on the promise of WandaVision’s post-credits scene and show viewers a version of Wanda Maximoff who’s been corrupted by the Darkhold. Assuming that’s the case, it stands to reason that Stephen Strange might decide to venture into the multiverse to find an uncorrupted version of Wanda — one who can help him stop her alternate from causing too much damage.

We’ll have to wait for the film’s theatrical release to find out whether that’s actually what we’re seeing in the Multiverse of Madness trailers.