“Things just got out of hand.” 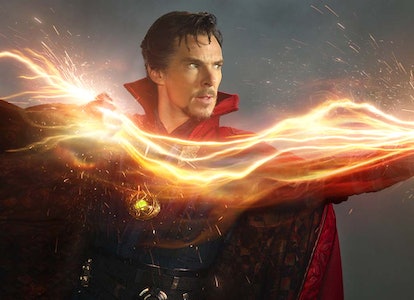 Spider-Man: No Way Home has officially hit theaters and brought with it, of all things, the first trailer for next year’s Doctor Strange in the Multiverse of Madness.

The surprise teaser acts as the film’s final post-credits scene and gives Marvel fans their first look at the highly anticipated Doctor Strange sequel. The film has been the subject of much debate and speculation ever since it was first announced and is expected to pick up many of the multiversal threads left hanging by titles like No Way Home, WandaVision, What If…?, and Loki.

Thankfully, the first trailer for Doctor Strange 2 suggests that it will manage to do all that and more. It’s a suitably psychedelic teaser, full of revelations and fun moments that should leave Marvel fans gobsmacked. Watch the full teaser below.

Here are the five biggest Easter eggs and reveals shown in the first trailer for Doctor Strange in the Multiverse of Madness — and what they all mean.

One of the biggest — and most shocking — rumors that began circulating online about Doctor Strange in the Multiverse of Madness earlier this year was that it would feature none other than Shuma-Gorath as a villain. The comic book character is a green, one-eyed tentacle monstrosity who was banished long ago but has his sight set on returning and ruling over Earth.

Those same rumors have suggested that Shuma-Gorath will seek to use the dimension-hopping powers of America Chavez (Xochitl Gomez) to do just that. While the accuracy of that specific rumor remains unclear, the Multiverse of Madness trailer does confirm Shuma-Gorath’s presence in the film, showing a brief moment in which Gorath hurls a bus at Doctor Strange (Benedict Cumberbatch) only for the sorcerer to cut it in half with a spell.

Xochitl Gomez’s America Chavez is also shown a few times throughout the trailer, and can even be seen wearing a delightfully comics-accurate version of the character’s iconic jean jacket.

Chavez can — among other things — create portals that allow her to travel freely across the multiverse. She’ll make her silver screen debut in the Doctor Strange sequel, and given her ties to the Young Avengers in the comics, she’s expected to become a major hero within the MCU. That said, the exact nature of her role in Multiverse of Madness is still a mystery.

Some rumors have claimed she’ll be running from Shuma-Gorath, while others have suggested that it’ll be Wanda Maximoff (Elizabeth Olsen) who hopes to use America’s powers for her own gain. However, all the Multiverse of Madness trailer really shows us is a brief shot of her standing next to Cumberbatch’s Stephen Strange, which means we should likely expect to see the two characters traveling together for at least part of the film.

3. Doctor Strange 2: Baron Mordo is Back

Baron Mordo (Chiwetel Ejiofor) makes his long-awaited MCU return in Doctor Strange in the Multiverse of Madness, and the film’s first trailer features plenty of footage. It seems like Mordo is still on his crusade to rid the universe of its so-called sorcerer problem, with the character telling Strange that his “desecration” of time and space in Spider-Man: No Way Home won’t go “unpunished.”

The trailer goes on to tease Strange and Mordo’s conflict, with the latter informing Strange that he’s dangerously wrong about who the biggest threats to the multiverse actually are.

The Multiverse of Madness trailer also shows Doctor Strange paying a visit to Elizabeth Olsen’s Wanda Maximoff, who tells him, “I knew sooner or later you’d show up. I made mistakes, and people were hurt.” Strange, however, cuts her off, telling her that he’s not there to “talk about Westview.” Instead, he’s come to seek her help, and when Wanda asks what he needs he says, “What do you know about the multiverse?”

The implication is that Strange isn’t coming after Wanda because of something she’s done, but because he genuinely needs her help fixing the multiversal damage he caused in Spider-Man: No Way Home. How Wanda’s role in the film will evolve from there remains unknown, though there is another shot in the trailer of Wanda wearing her full Scarlet Witch costume while performing some kind of spell.

Taking that into account, it certainly seems like Wanda’s journey in Multiverse of Madness could end up being just as dark as has been speculated. But the film’s trailer also suggests that, contrary to popular belief, Wanda will not be its main villain.

The Multiverse of Madness trailer ends with a major reveal: The live-action debut of a dark alternate reality version of Doctor Strange, likely the same variant introduced in What If…? Season 1.

“I hope you understand. The greatest threat to our universe… is you,” Mordo is heard telling Strange immediately before the trailer shows him coming face-to-face with his alternate self. Also played by Cumberbatch, the villainous variant is suitably creepy and appears to reside in a spooky version of the Sanctum Sanctorum that floats near a massive cosmic vortex.

Smiling the whole time, the dark Strange tells his other self that “things just got out of hand.” It’s a moment that not only confirms the highly anticipated MCU sequel will connect to the multiverse-centric first season of What If…?, but will also go to much scarier places than any other live-action MCU film.

We can’t wait to go there with it.