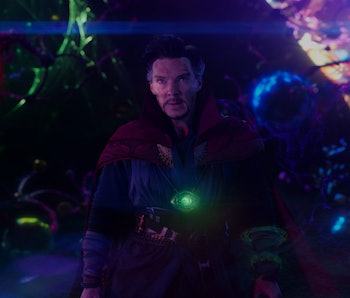 Doctor Strange in the Multiverse of Madness is, for now, a mystery.

We know that Elizabeth Olsen’s Wanda Maximoff will play a large role in the highly anticipated superhero sequel and that it’ll pick up where Spider-Man: No Way Home leaves off, but otherwise, the film’s plot remains under wraps.

That includes the nature of its villain, whose identity has yet to be confirmed or revealed by anyone involved. Of course, that veil of secrecy hasn’t stopped rumors from circulating online about Multiverse of Madness, with comics characters like Shuma-Gorath emerging as legitimate contenders for the role of the film’s major antagonist.

But another notable Marvel comics villain, at least as far as we can tell, would make a whole lot of sense as the Doctor Strange sequel’s primary antagonist.

The Theory — Plenty of noise has been made in recent months about Doctor Strange in the Multiverse of Madness being the closest thing to a horror film Marvel has made. The hiring of Evil Dead and Spider-Man filmmaker Sam Raimi as the film’s director has added some validity to those claims, but questions remain about how the film’s plot will justify its darker, scarier tone.

In the comics, Doctor Strange (Benedict Cumberbatch) has faced plenty of scary, otherworldly villains; if there was any one Marvel Cinematic Universe hero whose solo film could easily exist within the horror genre, it’d be Strange. And it’s hard to think of a comics villain who’d be a better choice for the film’s antagonist than the Lord of Dreams himself, Nightmare.

A New Nightmare — Nightmare is exactly what you think: the very personification and orchestrator of peoples’ bad dreams. A conceptual entity capable of assuming physical form, he resides largely in the Nightmare Realm but has attempted several times to try and extend his control into the prime universe and across the Ten Realms. He’s a malevolent trickster, who delights in torturing people with their very worst fears.

He’s also, notably, had several run-ins with Doctor Strange in the comics. As a mystical being, he’s a villain few characters are better-equipped to combat than Strange, which is why the two have faced off repeatedly. It’s also worth noting that Nightmare was killed at one point in the comics by none other than the God of Mischief, Loki, who’s rumored to have a role of some kind in Doctor Strange in the Multiverse of Madness.

Even without that possible connection, Nightmare just feels like the right villain for a film like Multiverse of Madness. After all, if that film is leaning hard into the horror genre, few villains could help it inject moments of pure terror and fear than the literal creator of nightmares.

The character’s existence as a conceptual being also makes him a perfect villain for a film expected to alter reality in possibly horrifying ways. Few characters are so capable of preying on the fears of someone like Wanda Maximoff as Nightmare. His manipulative personality and supernatural, reality-bending powers even made him one of the comics characters that fans theorized earlier this year was going to be the secret villain of Marvel’s WandaVision.

That, of course, did not end up coming to pass, but that doesn’t mean Nightmare won’t ever appear on-screen in the MCU.

The Inverse Analysis — In many ways, the inclusion of a character like Nightmare in Doctor Strange in the Multiverse of Madness feels like a no-brainer. That said, there’s still a lot that we don’t know about the sequel.

It’s entirely possible that Olsen’s Wanda Maximoff will emerge as the film’s primary villain. Coming off WandaVision’s post-credits scene, that feels like a legitimate possibility. It’d also be the most obvious route that Marvel could take with the film at this point, and if there’s one thing we’ve learned about the studio over the years, it’s that it strives to avoid doing anything obvious.

All of which is to say that, not only would Nightmare fit well within the film’s supposedly horror tone, but he’d also bring a surprising and unexpected presence to the film — one that could help elevate it into even weirder, scarier territory.