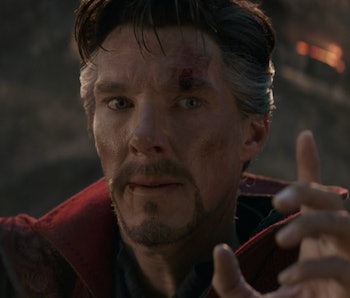 Doctor Strange in the Multiverse of Madness is shaping up to be one of the most game-changing titles in Marvel’s Phase Four.

Set to pick up where both WandaVision and Spider-Man: No Way Home leave off, and with director Sam Raimi at the helm, Multiverse of Madness has the potential to be one of the Marvel Cinematic Universe’s most narratively and stylistically impactful entries to date.

At the center of all that is the film’s mysterious multiversal premise, which Marvel Studios has been steadily hinting at since the film was announced two years ago. While much of the plot remains a mystery right now, the film’s use of the multiverse means that it’ll connect in some way to the events of Loki, the Disney+ series that wrapped up its first season earlier this year by literally creating a multiverse within the MCU.

But what if the existence of the multiverse isn’t all that ends up connecting Multiverse of Madness to Loki?

Where We Left Off — Next year’s Doctor Strange sequel could feature appearances from Tom Hiddleston’s God of Mischief as well as, possibly, several other characters from Disney+’s Loki. Recent rumors even suggest that Mobius (Owen Wilson) and Sylvie (Sophia Di Martino) will show up.

While those rumors remain unconfirmed, it’s not hard to envision Loki, Mobius, Sylvie, or some other notable figure from Loki Season 1 factoring into the plot of Doctor Strange in the Multiverse of Madness. In fact, such a character could very well prove to be instrumental in helping Stephen Strange (Benedict Cumberbatch) figure out exactly what’s gone wrong in the MCU.

Information is Everything — As far as we know, no one in the MCU knows more about the state of the multiverse — and the threat it poses — than Loki and Sylvie. That makes them both extremely powerful figures and potentially major assets to Strange.

From a purely narrative perspective, it makes sense for Loki, Sylvie, and even Mobius to appear in some capacity — if only to provide some much-needed context to all the characters (and audience members) unaware of what went down in Loki Season 1.

That’s not to say that any of those characters actually will appear in Doctor Strange in the Multiverse of Madness. The film contains a pretty sprawling cast of confirmed players, and there doesn’t seem to be a whole lot of room for more characters to appear. That said, Loki showrunner Michael Waldron did work heavily on the script for Multiverse of Madness, which means the two titles already share a major behind-the-scenes connection.

Whether that means Waldron found room for characters like Loki and Sylvie in Multiverse of Madness remains to be seen. Those characters are all expected to return in the already confirmed Loki Season 2. Early signs suggest that it may be several years before we actually see that next season released on Disney+. Based on where Loki Season 1 left off, we can’t imagine that Marvel is going to wait so long to catch up with the show’s characters.

The Inverse Analysis — Knowing Marvel, we won’t find out if Loki, Sylvie, and Mobius are actually in Doctor Strange in the Multiverse of Madness until it hits theaters next year. But from where we’re standing, it looks like a very real possibility that Loki will appear, especially given the roles he’s played up to this point in the MCU’s ongoing multiversal arc.

That’s not to mention the fact that Marvel fans are overdue for another on-screen interaction between Loki and Doctor Strange, following the characters’ brief but memorable confrontation in 2017’s Thor: Ragnarok.