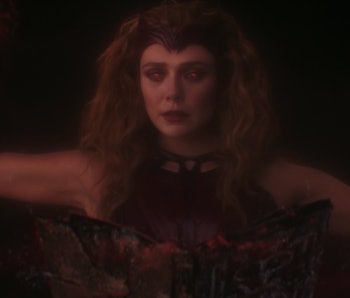 The post-credits scene of Marvel’s WandaVision saw Elizabeth Olsen’s Wanda Maximoff living quietly in a cabin in the middle of nowhere, making herself cups of coffee while her astral form studies the Darkhold in secret.

The scene, which is surprisingly unnerving, ends with Wanda hearing the distant voices of her sons, Billy and Tommy, calling out to her from, well, somewhere.

The scene has, understandably, been a topic of conversation amongst Marvel fans in recent months. The internet has seen more than its fair share of theories about where Wanda’s research into the Darkhold could lead, as well as ideas about what may have caused her to hear her sons’ voices.

No one, however, has pinpointed the location of WandaVision’s post-credits scene, which may give us a clue as to what lies in store for next year’s Doctor Strange in the Multiverse of Madness.

Wanda’s Cabin Getaway — The WandaVision post-credits scene does not specify where Wanda’s quiet, remote cabin is located. All we know is that it’s nestled between a vast lake and a towering mountain range. Fortunately, that’s enough to give us at least one theory as to where Wanda might have chosen to hide out after leaving Westview.

It’s possible Wanda made her new home at the base of the Marvel Cinematic Universe’s version of Wundagore Mountain, where the Darkhold was originally created in Marvel comics. If that’s the case, this opens the door for the Darkhold’s creator to play a role in Doctor Strange in the Multiverse of Madness.

That’s right, we are talking, once again, about Chthon.

Welcome to Wundagore — In the comics, Wundagore Mountain is located in the Eastern European country of Transia, and it is said that the Darkhold was first written deep within its caverns. Its author was none other than Chthon, an Elder God who became an expert in the dark sides of the mystic arts but who left Earth over a billion years ago to reside in an alternate plane. He left the Darkhold on Earth, in the hopes that he could one day use the book to bring him back to the planet, should he choose to return.

In addition to being the author of the Darkhold — the “book of the damned” that Wanda Maximoff is studying at the end of WandaVision — Chthon is also the source of Wanda’s chaos magic in the comics. How? Well, in the moments following one of his failed attempts to return to Earth, the Elder god marked Wanda as a possible physical vessel for him while she was being born near Wundagore.

Suffice so say, Chthon is already connected enough to Wanda in the comics to warrant speculation of his possible MCU debut. WandaVision’s introduction of both “chaos magic” and the Darkhold into the MCU, therefore, makes the possibility of Chthon showing up in Doctor Strange in the Multiverse of Madness seem that much more legitimate.

Perhaps that’s why Wanda picked a mountainside cabin as her new, interim home — not because it’s quiet, but because it puts her very close to the place where the very book she’s studying was first created. Maybe, just maybe, she’ll end up — whether accidentally or not — waking Chthon and letting him back into the material plane?

The Inverse Analysis — Right now, mystery surrounds Doctor Strange in the Multiverse of Madness, and the identity of its main villain is unknown.

There is the chance that the film’s mystery antagonist will be a zany multiversal being like Shuma-Gorath, a powerful conceptual entity like Nightmare, or even Wanda herself. Indeed, the list of possible candidates is long and varied. But given the character’s connections to both WandaVision and Wanda Maximoff, Chthon more than deserves to be seen as a legitimate contender.

Of course, the emergence of Chthon in the MCU would be an admittedly huge twist for Marvel to pull off in its upcoming Doctor Strange sequel. Then again, few villains seem more capable of throwing the multiverse into madness than the literal God of Chaos (not Loki, the other one).