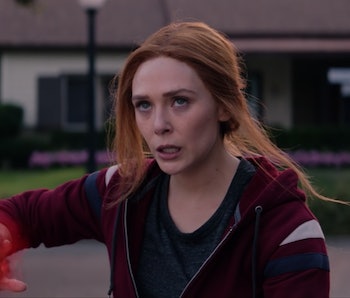 Loki just threw the entire Marvel Cinematic Universe into chaos. The closing minutes of its second episode, which dropped on Disney+ today, see the Sacred Timeline fracturing at a rapid rate, the Time Variance Authority scrambling to halt the creation of a new multiverse, and Loki (Tom Hiddleston) abandoning his TVA compatriots in favor of following his clever female doppelgänger (Sophia Di Martino).

It’s a lot to take in, but some distance from the episode reveals the one surprising way its hectic ending can tie into WandaVision’s ambiguous final scene.

The theory — Most of the scenes in Loki Episode 2 focus on the burgeoning partnership between Tom Hiddleston’s Loki and Owen Wilson’s Mobius, but it's Di Martino’s Lady Loki who makes the biggest splash in the episode. After revealing herself to her alternate self, the character gets the drop on the TVA by scattering several primed reset charges throughout the Sacred Timeline.

It’s a move that results in the creation of multiple Nexus Events — too many for the TVA to handle all at once — and which may lead to the formation of the very multiverse the Time Keepers are trying to prevent.

But beyond that, it’s the sudden, simultaneous emergence of so many branch realities that could be what allows Wanda Maximoff (Elizabeth Olsen) to hear the distant voices of her twin sons, as was seen in the WandaVision finale’s post-credits scene.

The WandaVision finale snuck two scenes into its end credits. The first saw Monica Rambeau (Teyonah Parris) crossing paths with a Skrull, while the second showed Olsen’s Wanda living in a remote cabin. The latter scene concluded with the reveal of Wanda studying the Darkhold in her astral form and then, strangely, hearing her sons Billy and Tommy calling out to her for help.

Predictably, the scene sparked major debate and speculation among Marvel fans. Were those actually the voices of her children? Another evil entity attempting to manipulate her? An unexpected byproduct of her time with the Darkhold? Or a hint that Billy and Tommy, who Wanda willingly erased from existence earlier in the WandaVision finale, were still alive in an alternate dimension?

We’ll have to wait for the release of Doctor Strange in the Multiverse of Madness in 2022 to find out the official answer to those questions, but the events of Loki Episode 2 do present a possible explanation.

If Lady Loki’s sabotage of the Sacred Timeline is what kickstarts the creation of a new multiverse in the MCU, then it’s not out of the question to believe it’s at the exact moment that the timeline is first fractured that Wanda hears her sons calling out to her. That’d certainly make sense — especially if the TVA really has (as it claims) been successful up to this point in preventing the formation of too many divergent realities.

Assuming Lady Loki’s timeline bombing breaks that streak, there’s no reason to believe it isn’t what opens the door for alternate versions of Tommy and Billy to be created. And if that’s the case, it also helps explain exactly how Loki will lead into Doctor Strange in the Multiverse of Madness (which is convenient since Michael Waldron wrote both of those MCU entries).

The Inverse Analysis — Loki has already tied into WandaVision in some major ways — namely through its explanation of Nexus Events. That means there’s the chance for future episodes of Loki to continue connecting to its Disney+ predecessor. So we wouldn’t be surprised if it’s Lady Loki’s actions in the closing moments of Loki Episode 2 that are what triggers Wanda’s telepathic discovery in the WandaVision finale.

That all depends, though, on if that’s actually what happened in the WandaVision scene. The presence of the Darkhold in that sequence does present the possibility that Wanda isn’t actually hearing the voices of alternate reality versions of her sons, but instead, is simply having her mind warped by the book.

That’s a legitimate possibility, but so is this Loki theory.

More like this
Entertainment
Jan. 25, 2023
The MCU could bring back a hero from its most underrated TV show
By Dais Johnston
Entertainment
Feb. 3, 2023
Marvel just revived its primate assassin — What to know about Hit-Monkey
By Mónica Marie Zorrilla
Entertainment
Jan. 30, 2023
The Last of Us Episode 3 Features One Subtle Video Game Easter Egg
By Alex Welch
LEARN SOMETHING NEW EVERY DAY.
Related Tags
Share: