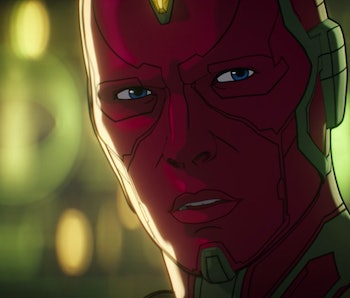 Of all the romances featured in the Marvel Cinematic Universe up to this point, few have resonated as deeply as that of Wanda Maximoff (Elizabeth Olsen) and Vision (Paul Bettany).

Simultaneously the oddest and most authentic relationship to exist in the MCU, it was a primary focus of WandaVision earlier this year; by dedicating as much time to Wanda and Vision’s connection as it did, the Disney+ series gradually emerged as one of the most moving stories Marvel has ever told.

And in a surprising turn of events, What If…? Episode 5 just made the relationship between Wanda and Vision — and WandaVision as a series — even more powerful.

An Undead Romance — What If…?’s fifth installment might be its strangest yet. Picking up roughly at the time of Avengers: Infinity War, the episode follows a ragtag group of MCU heroes fighting to survive a world overcome by a deadly virus — one that’s already turned many of Earth’s mightiest heroes into flesh-eating zombies.

It’s a truly insane half-hour of television, with plenty of shocking moments. However, few of the episode’s twists are quite as unexpected (or dark) as the reveal that Vision has been secretly protecting an undead version of Wanda Maximoff, containing her at Camp Lehigh and feeding her the flesh of unsuspecting human survivors.

It’s an undeniably horrifying twist, but one that adds an interesting new layer to not only Wanda and Vision’s MCU relationship as a whole but especially their story in WandaVision.

‘Til Death Do Us Part — As a series, WandaVision was all about exploring and depicting Wanda’s grief over Vision’s death in Infinity War, as well as her inability to let him go. That latter aspect of Wanda’s grief served as a key source of conflict between her and Vision, with the latter character confronting (and abandoning) Wanda in frustration about being trapped inside her Westview hex along with an entire town of unwilling citizens.

He was right to be frustrated and horrified by Wanda’s actions, especially as they involved controlling everyone in Westview. That said, What If…? Episode 5 adds a new layer to the duo’s relationship. The animated episode proves that, had Vision lost Wanda and not the other way around, he would have gone to similarly unethical methods to keep her in his life.

As a result, What If…? doesn’t so much rob Vision of his moral high ground in WandaVision as it further establishes how deep the pair’s love goes. The two Disney+ series essentially prove that, as one character faces losing the other, either would go to questionable lengths to avoid facing their grief — before, ultimately, redeeming themselves and attempting to rectify their mistakes (as Wanda does in WandaVision and Vision does in What If…? Episode 5).

The Inverse Analysis — What If…? is doing plenty for the future of the MCU, introducing alternate timelines, characters, and variants that could all come back into play in future live-action films and TV shows.

But with its fifth episode, What If…? retroactively deepens and intensifies the relationship between Wanda Maximoff and Vision. In doing so, the animated series adds an interesting and tragic new layer to their romance, one that may help us to see certain episodes of WandaVision in a new light.

What If…? is streaming now on Disney+.