'WandaVision': Chthon the Chaos God is coming. Here's what it means.

“The young witch is special to Chthon.” 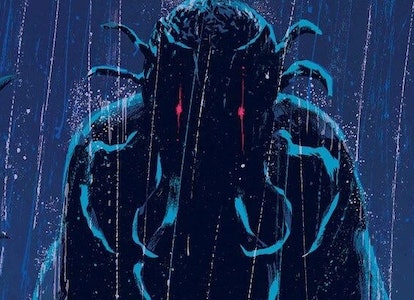 We're in the endgame now. In WandaVision Episode 8, Agatha Harkness played tour guide for Wanda on a journey through her most traumatic memories and formative moments, setting the stage for a brutal final act.

A first read of the episode, "Previously On," positions Agatha as the central WandaVision villain. But is she really? There's an argument that she simply wants to know how Wanda created the Westview Hex — although the presently imperiled Billy and Tommy might strongly disagree with said argument.

But if it's not exactly "Agatha all along," then who else is lurking in the shadows? The answer lies in one of Episode 8's final revelations: Chaos Magic.

What Happened — Throughout WandaVision Episode 8, we come to learn the full extent of Wanda's powers, thanks to a long tour through her personal history, dating all the way back to her childhood in Sokovia. We watch through Wanda's eyes as she and Pietro survive the bombing that takes their parents' life, thanks to Wanda stifling the power of the Stark Industries bomb. With Hydra, she bonds with the Mind Stone, and sees a magical silhouette in the process. What does it all mean?

Agatha spells out exactly what it all means, when she finally gives Wanda a name — both for her powers, as well as herself.

"Your children, Vision, this whole little life you've made... this is Chaos Magic, Wanda," says Agatha, arms wide, hair billowing with her own form of dark magic. "And that makes you ... the Scarlet Witch."

What It Means — All of this means one thing to comics fans: Chthon. Chthon is an Elder God in the Marvel Universe, a being who ruled the Earth billions of years ago among "siblings" before their corruption, which caused them to turn on each other. Chthon escaped to another dimension, the "Flickering Realm," but left a souvenir. He recorded all of his arcane knowledge onto indestructible paper to form what would become the Darkhold.

While the Darkhold was a major reveal in Episode 7, it didn't make an appearance in Episode 8. This episode's ties to Chthon lay in the two big revelations about Wanda: she's "the Scarlet Witch," and she uses Chaos Magic.

First, chaos magic is entirely Chthon's purview. In the comics, he uses this reality-warping power to rule over Earth before retreating to a different plane. Even there, he uses his powers to affect events on Earth through those who hold pages of the Darkhold. Chaos Magic becomes a thing of myth, and Chthon, the Chaos God, nothing but a story.

It isn't until Morgan le Fay summons him to Earth that he's allowed back, but this proves to be a mistake. Le Fay and her fellow mystics can't send Chthon back, so they do the next best thing: they force him to stay buried underneath Mount Wundagore in Transia (the comics equivalent of Sokovia). As you do.

Centuries later, the evil High Evolutionary builds his headquarters on Mount Wundagore and inadvertently releases Chthon yet again. Although he is quickly banished back within the mountain, he manages to leave a mark upon one of the Evolutionary's test subjects: Wanda Maximoff.

Chthon has possessed Wanda numerous times through comics history, making her do his dark bidding. This could very well happen in the WandaVision finale if not an upcoming Marvel film. If Chthon is the one behind Wanda's powers, it's unlikely we'd see her use so much of her abilities without being unnoticed by him.

The Inverse Analysis — The more information we get from WandaVision, the more a Chthon appearance feels inevitable. Even the comics his appearances are based on are surprisingly recent compared to other source material. Has Marvel's comic book output deliberately foreshadowed a new, scarier Big Bad than even Thanos? There's only so much time before we find out for certain — but for now, betting on Chthon feels like the right path forward, albeit a terrifying one.