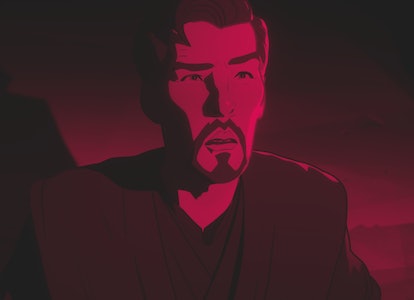 Marvel’s What If…? has picked up, more or less, exactly where Loki Season 1 left off.

Using the creation of the multiverse as a springboard, What If…? has spent its first seven episodes exploring alternate realities where certain heroes or events took far different directions than they did in the prime reality of the Marvel Cinematic Universe.

On its own, What If…? has functioned as a fun and efficient way of establishing the existence (and vast possibilities) of the multiverse within the MCU. But there’s reason to believe the animated Disney+ series is doing more than that and may, in fact, be introducing characters and storylines that some upcoming MCU titles will further explore.

That includes next year’s Doctor Strange in the Multiverse of Madness.

The Theory — What If…? Episode 4 introduced Marvel fans to a version of Stephen Strange (Benedict Cumberbatch), who ended up taking a far different path through the world of the mystic arts than his prime MCU self did.

Heartbroken over the passing of Christine Palmer (Rachel McAdams), the episode saw Strange spend hundreds of years researching how to undo an “absolute point in time.” Strange went so far as to consume the powers of other beings throughout the multiverse, all in a desperate attempt to save the love of his life. Ultimately, he succeeded in doing just that while also causing the destruction of his reality (and the lives of everyone in it) by doing so.

However, there’s reason to believe this version of Strange (known as “Doctor Strange Supreme”) isn’t gone for good. Previous What If…? trailers have hinted that he may make a return appearance before the end of its first season, and some Marvel fans believe he could very well show up on-screen in Doctor Strange in the Multiverse of Madness as well.

A Strange Encounter — While this may seem like a bit of an outlandish theory at first, there is some merit to it. For starters, there is the ongoing rumor that Hayley Atwell’s Captain Carter from What If…? will show up in live-action form in Multiverse of Madness. This could open the door for other What If…? characters to appear in the film.

The Doctor Strange sequel will also be dealing heavily with the multiverse as a whole. The movie will presumably be picking up with plot threads leftover from WandaVision, Loki Season 1, What If…? Season 1, and Spider-Man: No Way Home. Therefore, the film’s expected exploration of the multiverse could allow for alternate versions of its central characters to appear in it, including Doctor Strange Supreme.

An appearance from that darker, more twisted version of Strange would be in keeping with the film’s overall tone, which is said to lean further into horror territory than any MCU film has to date. The character’s inclusion in Multiverse of Madness would also give Marvel the chance to externalize Strange’s ongoing internal conflict once again, especially for all the viewers out there who might not be watching or keeping up with What If…? and missed the Strange vs. Strange fight in its fourth episode.

There is, of course, also the ongoing rumor that Doctor Strange in this year’s Spider-Man: No Way Home isn’t actually Stephen Strange but rather an impostor pretending to be him. Some fans think said impostor could be Doctor Strange Supreme from What If…?, which is an admittedly interesting theory. This writer, however, believes that Strange is acting perfectly like himself in No Way Home, so I don’t put quite as much stock in that rumor as some do.

The Inverse Analysis — With so much mystery surrounding its plot right now, it’s impossible to know for sure what surprises lie in store with Doctor Strange in the Multiverse of Madness. That said, we have a hard time believing that if Doctor Strange Supreme really is in the film, Marvel will reveal that any time before Multiverse of Madness’s actual theatrical release. Frankly, that seems like the kind of surprise the studio will want to keep very close to its chest in the coming months.

But let’s not forget the time earlier this year when Benedict Cumberbatch made a video appearance at a fan convention while filming Multiverse of Madness and wasn’t allowed to show his face on-screen. At the time, many Marvel fans assumed it was because Strange might undergo some kind of drastic transformation in the film.

But what if (pun very much intended) the reason was actually that Marvel didn’t want fans to see his look and later recognize it as that of Doctor Strange Supreme? That is, at the very least, an interesting possibility to consider.