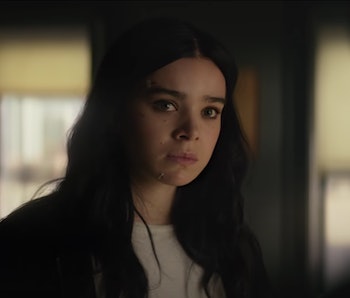 Kate Bishop has finally arrived in the Marvel Cinematic Universe. The character, played by Hailee Steinfeld, makes her MCU debut in the first two episodes of Marvel’s Hawkeye, which premiered this Wednesday on Disney+.

While Kate’s journey is just beginning, things are already off to an exciting and chaotic start on Hawkeye. And hidden among the many trouble-filled adventures that occur throughout the show’s opening episodes is a Marvel Comics Easter egg that only further cements Kate Bishop’s future in the MCU.

Kate’s Safe House — Early in Hawkeye Episode 2, Kate Bishop’s apartment gets burned down by the Tracksuit Mafia. Consequently, Kate and Clint Barton (Jeremy Renner) are forced to use her aunt’s apartment as a kind of safe house.

While Kate never says her aunt’s name out loud in the episode, a shot of her apartment building’s tenant lists reveals that Kate’s aunt is named Moira Brandon.

That’s a name that may only be familiar to die-hard comic book fans, but it’s one that was intentionally included in Hawkeye. Why? Because Moira Brandon just so happens to have ties to a Marvel Comics team that counts none other than Kate Bishop as one of its members.

Introducing Moira Brandon — In the comics, Moira Brandon is a former Hollywood actress living in Los Angeles, California. However, her Palos Verdes estate is eventually bought by the West Coast Avengers and used as their new compound. When the group is ambushed one day by the villainous Crossfire, Moira ends up saving the lives of both Clint Barton and his wife, Barbara Morse, aka Mockingbird. In return, Clint names her an honorary Avenger.

Now, what does any of this have to do with Kate Bishop and Hawkeye? Well, for starters, Clint Barton actually served as the chairman of the original iteration of the West Coast Avengers. Kate Bishop later reformed the team. She led a group of heroes, including Clint Barton, Johnny Watts (aka Fuse), America Chavez (aka Ms. America), Gwen Poole, Kid Omega, and Alloy.

This is worth noting because of the growing rumors that Marvel plans to introduce a Young Avengers or West Coast Avengers-style team to the MCU sometime in the near future. Many Marvel fans believe Avengers 5 or another crossover event film may revolve around the formation of said team, especially with Young Avengers characters like Kate Bishop, America Chavez, Elijah Bradley, Wiccan, Speed, and Cassie Lang all set to step into the spotlight in the next few years.

Therefore, the fact that Kate Bishop’s aunt in Hawkeye is named after a Marvel Comics character whose house serves as the headquarters of the West Coast Avengers seems like yet another hint that a new superhero team is coming to the MCU. It seems only inevitable that Hailee Steinfeld’s Kate Bishop will be a member of whatever team that ends up being too.

The Inverse Analysis — Marvel likes to keep its plans as close to its chest as possible, which makes predicting the future twists and turns of the MCU a somewhat tricky thing to do. That said, it’s becoming increasingly clear that Marvel Studios has plans for a Young Avengers or West Coast Avengers-inspired team in the MCU.

Will Moira Brandon actually end up playing a role in the formation of the MCU’s next superhero team? In all likelihood, probably not. But that doesn’t mean Hawkeye’s reference to her isn’t foreshadowing the eventual MCU debut of the West Coast Avengers or Kate Bishop’s presumed role in the team.