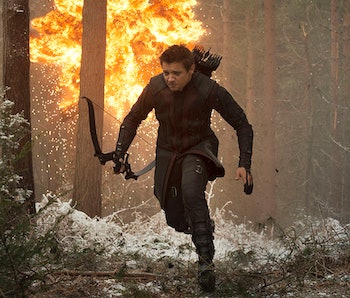 At long last, Clint Barton is the hero of his own story in the Marvel Cinematic Universe.

Jeremy Renner’s master archer is set to make his first screen appearance since 2019’s Avengers: Endgame in Hawkeye, Marvel’s upcoming six-episode Disney+ series. The new series will see him team up with Kate Bishop (Hailee Steinfeld), a skilled archer and aspiring superhero, to take down bad guys in red tracksuits and clean up messes he made during his days as the murderous vigilante Ronin.

While the series tells a largely standalone story, Hawkeye does reference characters and events from past MCU films, which means that everyone other than die-hard Marvel fans may want to take a look back before journeying into the future, ahead of Hawkeye premiering on November 24.

And there’s no MCU movie that fans should prioritize rewatching more than Avengers: Age of Ultron. Fortunately, the 2015 crossover film is streaming on Disney+. Here’s why Inverse recommends that you set aside some time for it before diving headfirst into Hawkeye.

After being sidelined and mind-controlled by Loki (Tom Hiddleston) for most of 2012’s The Avengers, Renner’s Hawkeye finally got the chance to truly shine in Avengers: Age of Ultron. While most of the 2015 film’s plot revolves around the creation of Ultron (James Spader) and the destruction that villainous A.I. wreaks around the world, Age of Ultron also carves out time in its plot to explore Clint’s secret home life.

Indeed, Age of Ultron turns Renner’s Hawkeye from a one-dimensional supporting character into a fully fleshed-out member of the Avengers. The film introduces Clint’s wife, Laura (Linda Cardellini), and spends a significant amount of time at their quiet farmhouse, where their kids run around. This decision went on to greatly impact 2019’s Avengers: Endgame, which turned Clint’s relationship with his family into one of the plot’s main emotional beats.

Now, Hawkeye is set to not only bring back Clint’s family but explore why he fights for them. As such, it’s a good idea to go back and rewatch Age of Ultron — if only to remind yourself of both the life Clint leads alongside his superhero career and how important it is to him.

Avengers: Age of Ultron is not the only MCU movie that has given Clint Barton the chance to shine in the spotlight. Avengers: Endgame began with a scene between the character and his family, and his actions in the first half of that 2019 film are referenced again in the Hawkeye Disney+ series.

Therefore, if you have the time to go back and also take another look at Avengers: Endgame, it wouldn’t hurt. But if you want to remind yourself who the MCU’s Clint Barton really is, there’s no Marvel movie we recommend rewatching this week more than Avengers: Age of Ultron.

At the very least, it’s the film that’ll fill you in on a lot of the character backstory you’ll need to know ahead of Hawkeye’s Disney+ premiere.

Avengers: Age of Ultron is available to stream now on Disney+.