Avengers: Endgame’s most dangerous character could make a Disney+ comeback

“They got Thanos. You get me.” 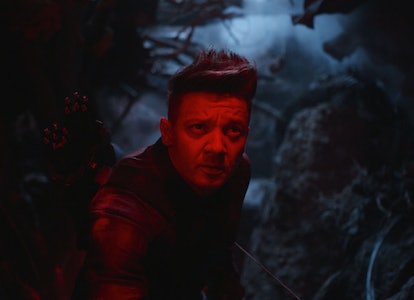 Even the Avengers who weren’t snapped out of existence still snapped, just in different ways. Case in point: this Avengers: Endgame hero, who may be making a serious comeback in an upcoming Disney+ project.

What Happened? — In an Instagram story on his official page, Hawkeye actor Jeremy Renner shared a selfie where he appears dressed in his Ronin costume, last seen in Avengers: Endgame. Renner’s text only said “Back when,” which obfuscates whether the photo was actually taken years ago while filming Endgame, or during filming of the Disney+ series Hawkeye, now taking place in Atlanta.

But. Even if it’s an old photo, Renner may still be hinting that Hawkeye will have scenes set near the events of Avengers: Endgame, likely in a flashback. While Renner’s actual screen time as Ronin was less than three minutes in Avengers: Endgame, there are canonically five whole years of Ronin activity that the audiences of the Marvel Cinematic Universe have not seen.

Hawkeye, which has a premiere date due for fall 2021 on Disney+, is a prime opportunity for the MCU to reveal more about Hawkeye’s dark run as the murderous vigilante Ronin. But what will Hawkeye reveal about Ronin that fans haven’t already seen before?

Requiem for a Ronin — Let’s acknowledge up front that the optics of Hawkeye’s Ronin (which, yes, originates in Brian Michael Bendis’ run on Avengers comics) are still very awkward, in that it’s a white guy dressing as a ninja in Japan. But “Ronin” had real significance for the character of Clint Barton as it marked a dark chapter for Hawkeye in the MCU.

With his family gone in the Blip, Hawkeye lost his conscience and channeled his rage in a distorted pursuit of justice. As he told Hiroyuki Sanada’s yakuza boss Akihiko, “You survived. Half the planet didn't. They got Thanos. You get me.” It wasn’t until Clint’s old friend Natasha (Scarlett Johansson) came to him did Hawkeye find his way back as a heroic Avenger.

But even while Hawkeye has moved on from Ronin, there are surely a lot of stories waiting to be told about Ronin in the five years of the Blip. With that much blood spilled, someone in the MCU will want to seek revenge for a life that Ronin took.

The Inverse Analysis — To be clear, it is still unknown if Renner’s Instagram story was actually a recent selfie from the set of Hawkeye or a throwback photo to the making of Avengers: Endgame, a movie that is now two years old as of this month.

Regardless, it is interesting that Renner is drumming up renewed interest in Ronin. Though Renner may simply be as nostalgic as we are, he could also be hinting at something coming soon.

Hawkeye will begin streaming on Disney+ in fall 2021.