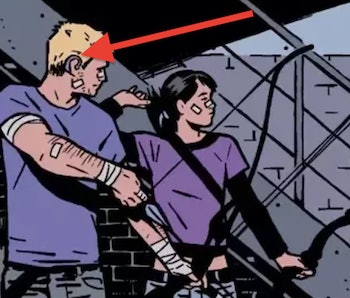 Something big is brewing in the Marvel Universe. Clint Barton aims to make his mark when Hawkeye debuts on Disney+ next year. The series is set in the aftermath of Avengers: Endgame and Clint will likely train Kate Bishop, his superhero successor in the comics. New set photos suggest that Hawkeye will adapt a much-loved comics arc that could mark a meaningful shift in Clint’s role in the Marvel Cinematic Universe.

Potential spoilers ahead for Hawkeye.

On December 2, images from the set of Hawkeye offered fans a first look at Hailee Steinfeld in the role of Kate Bishop. The actress was filming scenes in an underground subway station alongside Jeremy Renner. Armed with a bow, Kate looked ready for action. However, eagle-eyed fans were quick to notice a subtle, but significant difference about Clint.

Twitter user UptoTASK spotted that Clint (who was not wearing his Hawkeye costume) was wearing a small, flesh-colored hearing aid. While it could be that Renner was simply wearing an earpiece for set purposes, the device indicates that Hawkeye will probably lose most (if not all) of his hearing on the Disney+ series similar to his comics counterpart.

In the comics, Hawkeye sustained damage to his hearing following a confrontation with the Clown, a villain who stabbed the superhero’s ears with arrows. In 2014’s Hawkeye Vol. 4 #19, Hawkeye began using American Sign Language (ASL) to communicate with his friends and family. Even the speech bubbles were altered to reflect ASL instead of spoken dialogue.

In an earlier storyline, Hawkeye’s hearing was lost after being kidnapped by Crossfire, an antagonist who could emit ultrasonic frequencies to entrance others. Hawkeye’s disability has played a key role in his life, but one of the most refreshing things about this particular story is that it isn't treated as something that could stop Clint from being a superhero at all. Rather, it gives him a new sense of empowerment.

Hawkeye being deaf in the Disney+ series has long been rumored, but it’s all but confirmed now. The change will likely be pivotal to the character’s journey and will go a long way to normalize disability in the superhero genre. It’s an area where the MCU is sorely lacking in representation and Hawkeye could change it for the better if well-handled.

Unlike Daredevil, whose blindness functions as a part of his superhuman abilities, Hawkeye’s deafness is treated more realistically and it will be refreshing to witness the ways in which it is integrated into the story. The appearance of Hawkeye’s hearing aid could mean that he sustains an injury during the show. As of Endgame, Hawkeye’s hearing was unaffected and it’s possible that he will be fighting Crossfire in the show, mimicking his arc in the comics. Whatever happens, the changes made to Hawkeye’s storyline will be important to the MCU landscape moving forward.

Hawkeye will premiere at some point in 2021 on Disney+.