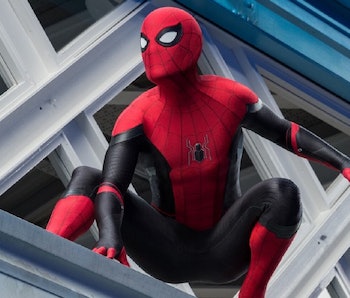 Hawkeye is expected to begin filming soon. Marvel’s Disney+ series will likely see Clint Barton training Kate Bishop, the fan-favorite archer who eventually assumes the Hawkeye moniker in the comics. While Marvel has yet to confirm which villains the pair might battle, the latest Hawkeye leak teases a notorious villain whose potential arrival could set up Spider-Man 3.

A casting leak obtained by Murphy’s Multiverse suggests that Hawkeye is looking for a deaf eight-year-old Indigenous actress to play Maya Lopez (aka Echo), a skilled martial artist and acrobat. In the comics, Echo’s face is marred with a white handprint that was left behind by her father after being killed by his boss Wilson Fisk, who is known better as the Kingpin.

However, his dying wish was for Fisk to raise Maya and she grew up under his tutelage. It wasn’t until she was an adult that Maya learned the truth about Fisk murdering her father. She was quick to shoot him in the eyes for his crimes.

Considering how integral Kingpin is to Echo’s story and that the casting calls for a child, it’s possible that Hawkeye will take place in the immediate aftermath of Kingpin’s crime. It’s unclear how big of a role Echo will have in Hawkeye, but even if this casting is for a flashback, a brief Fisk appearance could pave the way for him to become a primary antagonist in Spider-Man 3.

Echo has also gone by the alias of Ronin in the comics and Hawkeye could change her storyline so that Clint raises her instead of Kingpin. The Ronin moniker was never actually referenced in Avengers: Endgame and, if Clint is going to retire, Kate and Maya may as well take both titles. That said, Maya being raised by Hawkeye would be a boring path to take by comparison. The wealth of drama the Kingpin’s involvement would entail is enough to hope for his involvement.

Of course, Kingpin is most recognizable as a Spider-Man villain, but his criminal empire and sordid connections run so deep throughout New York that he’s become an antagonist for Daredevil and the Punisher among others. The character was also the primary villain in the series Daredevil and The Defenders, which served as the Marvel Netflix equivalent to the MCU crossovers.

Kingpin actor Vincent D’Onofrio has previously expressed interest in reprising his role in the MCU’s Spider-Man movies. While the only MCU character to crossover to Marvel TV (pre-Disney+) has been Clark Gregg’s Agent Coulson, a potential Kingpin appearance in Hawkeye could open the doors for more interconnectivity between the now-cancelled shows and the MCU. If Electro can join Spider-Man 3, then there’s no reason to think the same can’t be done for Kingpin. The possibilities are endless.

Hawkeye will premiere on Disney+ late next year.