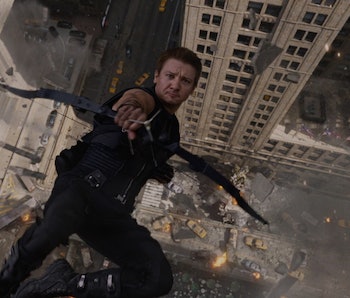 Hawkeye is ready for his close-up. The superhero's story took a dark and vengeful turn in Avengers: Endgame and he became a killing machine following the deaths of his family in Infinity War. Hawkeye looks to bring Clint Barton back to the heroic side of the spectrum when the series ultimately premieres on Disney+.

Brought to life on the big screen by Jeremy Renner, Hawkeye has been a part of the MCU since he made his debut in 2011’s Thor. Over the course of four MCU films (so far) — Thor, The Avengers, Avengers: Age of Ultron, Captain America: Civil War, and Endgame — Hawkeye has become an integral part of the team.

He rejoined the Avengers in Endgame to defeat Thanos once and for all and retired yet again at the end of that movie. But Disney has brought him out of retirement for one last story, Hawkeye, in which he’ll pass on the titular mantle to Kate Bishop.

Hawkeye was first announced in the spring of 2019 and was officially confirmed by Marvel Studios during that year’s San Diego Comic-Con. After several months of delays, production has finally begun on the series. Hawkeye won't be going on his next adventure alone, however, and a host of new characters will be joining him and Kate as they take on the next nefarious villain.

Here’s everything we know about the upcoming Hawkeye series on Disney+, including its release date, plot, cast and more.

What is the release date for the Hawkeye series?

Marvel Studios confirmed at San Diego Comic-Con that the Hawkeye series was scheduled for release in fall 2021. Despite previous production shutdowns, Hawkeye's filming doesn't seem to have been affected and it's on track to be released next fall as scheduled.

However, a concrete premiere date has not been announced, so stay tuned for more information.

When did Hawkeye film?

Hawkeye began filming in December 2020 in New York City. The majority of production took place across several locations in NYC. The series then moved down south, beginning to film in Georgia across the first few months of 2021.

What is the plot of the Hawkeye Disney+ series?

Per Variety, we know for sure that the Hawkeye series will revolve around Clint Barton and his protégé, Kate Bishop. It’s already being described as an “adventure series” and will see Clint “pass the torch to Kate Bishop.”

In the comics, Kate is a member of the Young Avengers and assumes the Hawkeye identity after Barton is presumed dead. Although Barton is brought back to life, he takes over the Ronin identity, allowing Kate to continue to be Hawkeye. Clint did wear his Ronin costume in Endgame, though the movie shied away from calling him by a new moniker. That might change over the course of the Disney+ series, especially considering that Kate is now training under his tutelage.

What's more, it seems that Hawkeye will lose his hearing in the show, which sets up the arrival of Clown, a villain who stabbed Clint with several arrows and permanently damaged his eardrums. Variety confirmed that a character by the name of Kazi (aka, Kazimierz Kazimierczak) will appear in the show, lending credence to Clown as one of the show's primary antagonists.

Echo, a deaf Native American superhero who can mirror other people's physical movements, is also expected to make her debut on the show. Her history with the Kingpin, the villain who raised her after killing her father, could prove vital to Hawkeye's storyline.

Who is in the cast of the Hawkeye series?

Obviously, Renner is reprising his role as Clint Barton/Hawkeye. Meanwhile, Hailee Steinfeld has been cast in the role of Kate Bishop. Set photo leaks revealed that the pair of archers will also be joined by a golden retriever named Lucky the Pizza Dog. Here is the full cast list:

Is there a trailer for Hawkeye?

Yes! The first trailer for Hawkeye dropped in September 2021, highlighting characters old and new and the holiday setting. You can watch it below:

Additionally, Marvel Studios showed some new footage as part of its 2021 Disney Plus Day. In it, Clint and Kate attempt to escape a group of leisure suit-wearing goons via stealing a car, all done in seemingly one shot.

Will other MCU superheroes show up?

Yes! Yelena Belova, whose first MCU appearance will be in the delayed Black Widow film, will show up in Hawkeye. It's possible that her arrival will mark the first time that she'll go by the Black Widow moniker following Natasha's death in Endgame. Now that she's stateside, she might assist Clint and Kate in whatever mission they get up to next. It's hard to say if other MCU superheroes will show up, but the crossover potential is very high.

Will there be a spinoff of Hawkeye?

As with many of the Disney+ MCU series, it’s unknown at the moment whether Hawkeye will go beyond one season. However, the universe set up in the series will at least live on in the form of a spinoff show focusing on Maya Lopez/Echo. According to Variety, the series is in early development, with Etan Cohen (Tropic Thunder) and Emily Cohen set to write and executive produce.

Is Hawkeye the only MCU Character Getting a Disney+ Series?

Not at all! Hawkeye is just one of the Marvel characters old and new to get their own series on Disney+, as the film franchise has added streaming TV to their repertoire.

Hawkeye will succeed fellow MCU series WandaVision, The Falcon and the Winter Soldier, Loki, and What If? It will then be followed by a number of shows introducing new characters and events to the franchise. The list includes Ms. Marvel, which will introduce shapeshifter Kamala Khan to the MCU; Moon Knight, starring Oscar Isaacs as the titular hero; and She-Hulk, with Tatiana Maslany playing Bruce Banner’s cousin. All of those series plan to air over the course of 2021 and 2022.