“We should tell him the truth.” 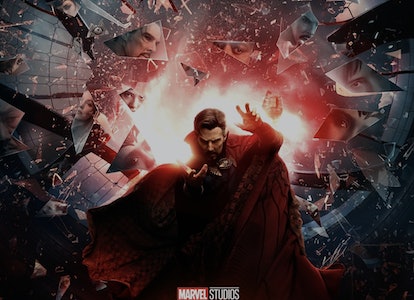 Marvel’s cinematic universe is now the Marvel Cinematic Multiverse thanks to Loki, What If...?, and Spider-Man: No Way Home. But while we’ve seen the consequences of messing with the multiverse, we have yet to see it be the sole focus of a Marvel story. That is... until now. During Super Bowl 2022, the studio premiered the second trailer for the upcoming movie, Doctor Strange in the Multiverse of Madness, and this promising glimpse teases something brand new for the MCU — the crossover event fans have been clamoring for.

This isn’t the first time we’ve seen director Sam Raimi’s take on Doctor Strange. Those who watch Spider-Man: No Way Home post-credits scene saw a blink-and-you’ll-miss-it montage of moments from the upcoming sequel. The most intriguing part of that teaser was seeing Doctor Strange approach a secluded Wanda Maximoff and acknowledge the events of WandaVision.

This new trailer incorporates many new-yet-familiar Marvel characters. The tentacle monster from What If...? makes a cameo along with the multiverse version of Stephen credited in the trailer only as “Sinister Strange.” America Chavez, a long-anticipated debut in the MCU, makes not one but two appearances in this trailer alone.

Check out the trailer below.

But the biggest mystery surrounding the trailer happens at the 1:18 mark when a mystery voice (aptly credited as “Mystery Voice” in the closed captions) confronts a handcuffed Stephen and says, “We should tell him the truth.” in a British accent. Considering the unclear view of the speaker and his British accent, fans are already speculating about his identity.

The leading theory is that this is none other than Charles Xavier, aka Professor X, ushering in the MCU introduction of the X-Men. Leaks have suggested that Professor X will appear in Doctor Strange 2. Now that the X-Men IP is fair game, this potential character’s debut in the MCU seems like only a matter of time. Could Doctor Strange’s deep dive into the multiverse be our first dip into the world of X-Men’s mutants?

While many fans seem convinced, there are other possibilities. Considering Strange is in handcuffs, this could be another appearance of the Time Variance Authority from Loki. Because of Strange’s multiversal mishaps, it makes sense for the TVA to apprehend anyone messing with the timeline. Could this character be yet another TVA officer or even Kang himself?

This trailer is clearly setting up a mystery, and it’s unlikely we’ll have a firm answer before the premiere. But still, that doesn’t mean we can’t play detective in the meantime.

Doctor Strange in the Multiverse of Madness releases on May 6, 2022 in theaters.