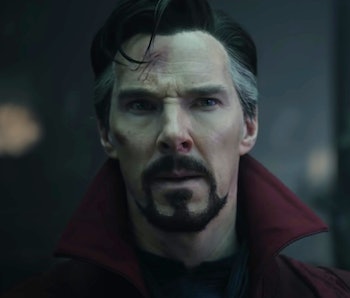 Marvel fans are starting to take their theories about Doctor Strange in the Multiverse of Madness a bit too far.

The film, which will hit theaters in early May, promises to be one of Marvel’s most ambitious and trippiest projects to date. Picking up where WandaVision and Spider-Man: No Way Home left off, Multiverse of Madness has already been confirmed to feature appearances from some truly weird comic book villains as well as What If…? Season 1’s best character.

Those are far from the only characters rumored to be appearing in Multiverse of Madness, though. Marvel fans and so-called “leakers” have spent months claiming that everyone from Tom Cruise to Edward Norton will appear in the Doctor Strange sequel. It all led to the emergence of a truly ridiculous meme that shows off Multiverse of Madness’ “rumored character cameo list.”

So now seems as good a time as any to address which of the Marvel Cinematic Universe film’s rumored cameos are worth talking about and which ones definitely are not.

When it comes to which surprise Marvel Comics characters may actually show up in Doctor Strange in the Multiverse of Madness, the list is a lot shorter than most fans probably want it to be.

Several well-known Marvel insiders have claimed that Professor X will appear in the film, so it seems as though there’s a real chance the X-Men leader may have a role in the Doctor Strange sequel. It is not, however, known who will play the character, so there’s always a chance Patrick Stewart, James McAvoy, or another actor could assume the role of Multiverse of Madness’ Professor X. Of course, that is assuming he really is in the film.

Ghost Rider is also said to have a surprise cameo in Multiverse of Madness, with early leaks claiming that the film will briefly introduce the character before he goes on to appear in other TV shows and movies. That said, should Ghost Rider appear in the sequel, early reports suggest that neither Nicholas Cage nor Gabriel Luna will play the character.

And that’s about it for the Multiverse of Madness cameos that may actually happen.

It should just be said upfront: No matter how much certain comic book fans want you to believe it, there is almost no chance that Tom Cruise will appear as a variant of Tony Stark in Multiverse of Madness. The idea that one of the biggest movie stars on the planet will appear in the film just because he almost played Iron Man nearly 15 years ago makes little sense. It doesn’t seem like something either Cruise or Marvel would be interested in doing.

It seems similarly unlikely that any actors from 20th Century Fox’s X-Men movies — outside of Patrick Stewart or James McAvoy — will appear in Multiverse of Madness. There have been no substantial leaks up to this point that suggest characters like Storm (Halle Berry), Magneto (Ian McKellen), Cyclops (James Marsden), or Wolverine (Hugh Jackman) will appear in the film.

The same goes for Ioan Gruffudd and Thomas Jane. Not only have other actors played Mister Fantastic and The Punisher in the years since they made their turns as the characters, but their performances simply aren’t beloved enough to warrant the kind of Charlie Cox-style return that Marvel Studios seems interested in pulling off.

There is, of course, always the chance that Jon Bernthal will return as The Punisher at some point, but there’s no reason to believe it’ll happen in Multiverse of Madness.

Additionally, with Mahershala Ali’s Blade set to emerge as a major new MCU figure in the coming years, it’s unlikely that Marvel will bring Wesley Snipes back as the character for a cameo any time soon. While Tobey Maguire has an established relationship with Multiverse of Madness director Sam Raimi as well, it’s hard to believe Marvel would choose to bring Maguire back as Peter Parker in this year’s Doctor Strange sequel so shortly after his appearance in Spider-Man: No Way Home.

As for Edward Norton’s Bruce Banner appearing in Multiverse of Madness, the likelihood of Marvel and Kevin Feige ever wanting to work with Norton again seems, well, slim.

The Inverse Analysis — It’s easy to see why Marvel fans are going a bit mad with theories about Doctor Strange in the Multiverse of Madness. The film’s premise opens the door for it to do quite literally anything. However, just because the film can feature appearances from actors like Wesley Snipes and Nicolas Cage doesn’t mean it will.

Spider-Man: No Way Home proved that Marvel is only interested in including cameos that matter and add something to their stories. Therefore, when you’re looking at all the Multiverse of Madness rumors that will undoubtedly continue to hit the internet over the next three months or so, it’ll be important to continue asking, “What would this cameo actually add to Doctor Strange 2’s story?”

Most of the time, the answer to that question will probably be, “Not much.” And yes, that does also apply to the latest rumors about John Krasinski appearing as Mister Fantastic in the film.