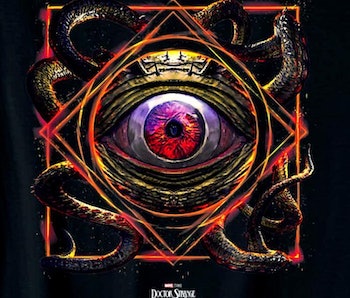 Doctor Strange will soon learn that is not dead which can eternal lie. Also, he’s going to fight a monster.

But what’s the monster’s name?

In the aftermath of Spider-Man: No Way Home, Doctor Strange (Benedict Cumberbatch) will have to deal with his grave error of cracking open the multiverse in Doctor Strange in the Multiverse of Madness, which opens in theaters on May 6. At the center of the film is an eerie one-eyed beast, whose tentacle limbs were first seen in a very dark episode of What If...?.

This monster has a name, but it’s not the name that longtime Marvel fans think it is.

What Happened? — On Monday, Marvel fans found pieces of official merchandise for Doctor Strange in the Multiverse of Madness listed on Amazon. A few items bear official art of the tentacle monster Strange will fight in the movie, Gargantos.

Doctor Strange has fought a tentacle monster before, but its name wasn’t Gargantos. In the comics it’s Shuma-Gorath, an ancient being whose race are known in the Marvel Universe as Elder Gods. The Elder Gods are heavily inspired by, if not a blatant copy of, the Great Old Ones of H.P. Lovecraft’s mythos. The MCU is consolidating names and concepts, seemingly for creative and legal reasons, a tactic it’s used before.

Gargantos versus Shuma-Gorath — Let’s clarify: Gargantos is not Shuma-Gorath. Despite looking very similar, they have different histories.

Gargantos has a limited presence in Marvel Comics, making just two appearances. The first came in Sub-Mariner #13 in 1969, while the second was in X-Factor Annual #4 in 1989. Very little is known about Gargantos beyond the fact that he’s a vicious sea creature. He has no origin or notable history whatsoever.

Shuma-Gorath, as a recurring nemesis to Doctor Strange, is far more prolific. Their history began when the exiled Shuma-Gorath attempted to return to Earth via the mind of the Ancient One, which forced Strange to slay his mentor. In later storylines Shuma-Gorath came to Earth anyway, once through a spell spoken by the Fantastic Four after they were tricked by Agatha Harkness’ son, Nicholas Scratch. And in the 2013 crossover Infinity, Strange was forced by Thanos and his subordinate Ebony Maw to summon Shuma-Gorath to Manhattan. Thankfully, the Avengers arrived to save the day.

Amusingly, Shuma-Gorath also has a history in Marvel’s video games, including as a playable character in Marvel vs. Capcom 3. You have to see his combo attacks.

So Shuma-Gorath is a mighty foe, one often summoned by villains to wreak havoc on the planet. But Doctor Strange is usually there to stop him and banish him back into deep space.

Why Has Shuma-Gorath’s name changed? — If you’re wondering why the MCU isn’t calling its tentacle monster who hails from the multiverse’s depths Shuma-Gorath, you’re not alone. Since the film’s merch went up on Amazon, fans have also been scratching their heads at the name change. The reason might be legal.

While the Elder Gods are inspired by Lovecraft’s works, which are public domain, the name Shuma-Gorath comes from the world of Conan the Barbarian. Conan was created by Robert E. Howard and, as of September 2021, it’s the intellectual property of Heroic Signatures.

Though Marvel publishes Conan comics, including an ongoing series titled Savage Avengers where Conan joins with Wolverine, Elektra, and the Punisher, Conan isn’t Marvel’s property. And the name Shuma-Gorath, which had a passing mention in the 1967 short story “The Curse of the Golden Skull,” still belongs to the copyright owners of Conan.

It seems Marvel changed the name of Shuma-Gorath to another monster with a striking resemblance whose name they actually own, Gargantos. Problem solved.

Names Are Sacred — While Doctor Strange fans may be disappointed that Strange isn’t technically fighting Shuma-Gorath, the MCU has pulled this trick off several times before.

In Shang-Chi and the Legend of the Ten Rings, Tony Leung’s Wenwu was a composite character that combined the Mandarin with Fu Manchu, the famous pulp villain created by author Sax Rohmer in the original Master of Kung Fu comics.

Before Shang-Chi, the MCU changed Star-Lord’s father from J’Son and gave his story to Ego the Living Planet, a wildly different character from the comics, in Guardians of the Galaxy Vol. 2. That same year, in Thor: Ragnarok, Cate Blanchett’s Hela was given the story of a different character, Aldrif Odinsdottir, the first daughter of Odin whose own very complicated legal history traces back to the pages of Todd McFarlane’s Spawn.

And here we are again, with Multiverse of Madness giving the name of one tentacle monster to another to avoid the most dastardly villain of all, copyright infringement.

The Inverse Analysis — While “Gargantos” sounds more like a mythical Greek sea creature than a cosmic god, it’s tough to imagine casual audiences noticing the difference. The name Gargantos still works, even if it doesn’t evoke the same feeling of unspeakable horror that Shuma-Gorath does. At the end of the day Doctor Strange is going to banish this bad boy back to outer space, and that’s all that matters.

Doctor Strange in the Multiverse of Madness will hit theaters on May 6.