'Doctor Strange 2' trailer: Every 'What If?' Easter egg revealed in 'Multiverse of Madness'

“The world out there is breaking.” 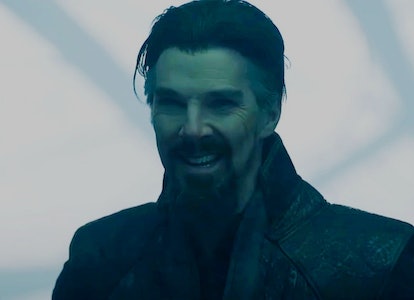 Shows like WandaVision and Loki changed the way we think about the multiverse, but What If...? was the first Marvel series to truly explore it. However, because of its self-proclaimed hypothetical nature, it didn’t get the same level of speculation from viewers. After all, none of it was canon, so it wouldn’t affect events in the future.

However, the release of the Super Bowl trailer for Doctor Strange in the Multiverse of Madness proved us wrong. Sure, What If...? may have taken place outside of the Sacred Timeline, but it looks like MCU canon will be exploring those places too. Here are four What If...? references you missed in the new Doctor Strange 2 trailer.

One of the highlights of the new trailer was a glimpse at a version of Stephen Strange with different facial hair. Fans of What If...? recognize this variant of Dr. Strange as “Strange Supreme,” though in the trailer he’s credited as “Sinister Strange.”

Considering the deeply mystical origin of the multiverse and the variants of Loki we’ve seen in the past, Sinister Strange being a variant of Dr. Strange seems like a logical conclusion.

The next big What If...? cameo was the strange octopus-like monster known as Shuma-Gorath. Featured in Episode 1, this monster appeared from a portal and fought Captain Carter. It later appeared in Episode 4, where it faced off against a variant of Dr. Strange. After Strange defeated the creature, it merged with his powers.

Is this an earlier version of that same creature? A variant of it? Or an entirely different tentacle creature? There’s no way to know for sure until we see more of the film.

This Easter egg is even harder to find — it’s hidden in the newly released poster showing many shards of glass. In one of the shards, you can just make out Captain Carter’s Union Jack shield. Captain Carter’s inclusion in this movie would line up with the leaks surrounding the sequel. But because this movie is live-action, not animated like What If...?, it would require the return of Hayley Atwell as Peggy Carter.

One of the narrative elements in Dr. Strange’s What If...? episode was the constant replaying of the night the sorcerer lost the use of his hands. But the episode puts on twist on that traumatic event, and instead of an injury, Dr. Strange loses Christine. No matter how many times he relives the night, she is taken from him.

Christine, played by Rachel McAdams, appears in the trailer. But could she be a variant of Christine? One popular theory is that we’ll see more than one Christine in Multiverse of Madness, and that may be what causes more of Strange’s multiversal problems.

We’ll simply have to wait a few months to find out.

Doctor Strange in the Multiverse of Madness premieres May 6, 2022 in theaters.