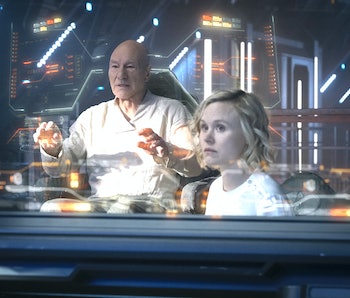 Picard is back, and he’s bringing his greatest frenemy of all time with him! It's been over a year since Jean-Luc Picard returned to fight for android rights, and now Star Trek: Picard Season 1 is now available to binge-watch all in one go. By the end of the Season 1 finale, "Et in Arcadia Ego Part 2," the status quo of the most famous character from Star Trek: The Next Generation has been changed forever. But what's going on with Picard Season 2? Turns out, quite a bit.

From the release date to the guest stars and hints about the actual storyline, here’s everything we know so far about Star Trek: Picard Season 2. Let’s make it so!

Spoilers ahead for all of Picard Season 1.

Will there be a Season 2 of Star Trek: Picard?

Yes. Even before Picard Season 1 premiered on CBS All Access, the second season was already confirmed. As far as we know, the second season of Picard is in pre-production. This means they haven't started filming it. There's also every reason to believe that the coronavirus pandemic has slowed some of that process down a bit. Picard's sister series, Star Trek: Discovery Season 3, expected delays in post-production, though eventually debuted in October 2020, and is already filming Season 4.But, because of the ongoing COVID-19 pandemic, most Star Trek is moving forward, but more slowly than usual.

As of February 1st, 2021, Picard was supposed to be filming. Jeri Ryan revealed on Twitter that this had not happened, but assured fans that filming would begin "soon." Production was officially announced on April 5, 2021.

Star Trek: Picard Season 2 will be released sometime in 2022. This time frame was confirmed by the First Contact Day celebrations on April 5.

Is there a Star Trek: Picard Season 2 trailer?

Kind of. As of April 5, there is a teaser trailer for the show. This trailer finds Picard narrating his feelings about time, regret, and how sometimes you can’t get “second chances.” The trailer has a lot of Easter eggs including a model of Jean-Luc’s old ship the USS Stargazer as well as a Dixon Hill novel. And, of course, the trailer reveals that Season 2 will feature the return of Q. (Watch below.)

Who is the showrunner for Star Trek: Picard Season 2?

Though novelist Michael Chabon was the showrunner for Picard Season 1, he's control of the writers' room over to Terry Matalas, who will serve as the showrunner for Season 2, with producer Akiva Goldsman as co-showrunner. (Goldsman is also co-showrunner on Strange New Worlds with Henry Alonso Myers. Chabon isn't leaving Picard though, and will still be writing episodes of the series, and helping to shape the overall story. Chabon is mostly stepping down to focus on adapting his acclaimed metafictional comic-book novel, The Amazing Adventures of Kavalier and Clay, into a TV series.

Matalas, previously the executive producer on the 12 Monkeys reboot, also worked on Voyager and Enterprise, meaning he has some serious Star Trek cred.

Brent Spiner has said emphatically he will not play Data again. This means the dream sequences and the "quantum simulation" scenes of Data in the Picard Season 1 finale are pretty much it. Data is dead. (For good this time.)

However, Spiner did say he would consider reprising his newest role as Data's human "brother," Altan Soong.

Who is in the Star Trek: Picard Season 2 cast?

The final shot of the Picard Season 1 finale suggests the crew of the La Sirena has come together and that every person we see will return. Speaking on The Ready Room, Patrick Stewart and Alison Pill both mentioned that they know things about Season 2, and Pill even said she'd chatted with Ayelet Waldman (Chabon's wife, who is an executive producer and writer on the show) about future storylines.

So Jurati and Jean-Luc are in, and it seems like a good bet that Raffi (Michelle Hurd), Rios (Santiago Cabrera), Elnor (Evan Evagora), and Seven of Nine (Jeri Ryan) will return. Of course, Season 2 would make zero sense without Isa Briones returning as Soji.

Other cast members like Narek (Harry Treadaway) and returning Next Generation faces like Riker and Troi remain up in the air. Stewart publicly invited Whoopi Goldberg to reprise her role as Guinan in Season 2, so that's an enticing possible addition. Other than Data, Riker, and Troi, we didn't see any Next Generation folks in Season 1 and there's a long list of people who could make cameos.

Again, it was also confirmed in April that Q (John de Lancie) will be back and that he’ll return at a “shattering moment” for Jean-Luc Picard.

What is the plot of Star Trek: Picard Season 2?

Unlike the finales of both Discovery Season 1 or Season 2, the ending of Picard's first season gives the crew of the La Sirena a clean slate for the future. Before assembling the crew and saying "Engage!" Jean-Luc simply says, "it's time." Time for what?

There are several lingering concepts from Season 1 that could become big story points in Season 2. In his fan Instagram talkbacks, Chabon implied Picard's new status as a synthetic life-form could be something addressed in Season 2. Is Jean-Luc going to tell everyone he’s a robot now? Maybe not. In an April interview with the Hollywood Reporter, Akiva Goldsman said Picard’s new android/Synth body won’t be a big deal in Season 2. “We did fundamentally try to address that at the end of [Season 1 episode 10.] He's not Super Picard. We reset this congenital problem he lived with him since Next Gen and gave him the opportunity for rebirth, but it's nothing more than a record as he might have been where he not here.”

From Raffi and Seven's budding romance (Saffi? Reven?) to Jurati's unatoned murder of Bruce Maddox, there several topics Season 2 could address. Yet because the format of the show seems so wide open, anything seems possible. The Season 2 teaser certainly makes one think the entire season will be about Q putting humanity back on trial, but it’s possible that’s not the entire focus of the season. That said, Q’s return might be more connected to something personal in Picard’s life. Goldsman said the return of Q will be connected to big, meaty character arc stuff: “In some ways [Q is] one of Picard's deepest — not deep in the same way that Riker is or Beverly Crusher was — but in its own uniquely, profoundly deep relationship.”

Despite an open-ended Season 1 finale, Picard will likely not go episodic. The show will have a serialized story in the same style as Season 1. In April 2021, Goldsman described Picard Season 2 as “deeply serialized.” He also empathized the idea that Picard Season 2 may be slightly tighter than Season 1. When asked what lessons he learned on Season 1, Goldsman said, “Figure out the end earlier. If you're going to do a serialized show that you have the whole story before you start shooting. It's more like a movie in that way – you better know the end of your third act before you start filming your first scene.”