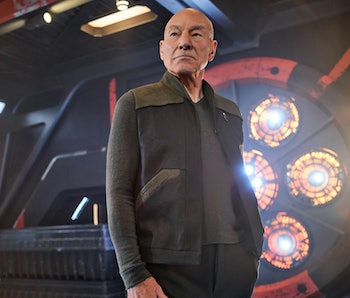 In its very first episode, Star Trek: The Next Generation explored a trial against humanity. The judge, jury, and executioner: Q, played by John de Lancie. Returning in the series finale, “All Good Things...,” Q taunted Jean-Luc Picard with these terrifying words: “The trial never ends.”

Sounds like someone’s living up to his word. A new teaser trailer for Picard Season 2 reveals a 2022 release date for the Paramount+ series, and what’s more, a return of Picard’s ancient foe.

Like the one for Season 1, this teaser features no actual footage from the new season, instead focusing on various objects in Picard’s study: That famous painting of the Enterprise-D, a model of his old ship, the Stargazer, and a deck of cards — specifically a queen of hearts.

That queen of hearts dissolves into just one letter: “Q.” It means exactly what you think it means: Q is returning to the Trek canon. John de Lancie himself appeared on the panel, confirming his involvement in Season 2 of Picard, saying: “I'm here to make your life as annoying as possible!" and added, "I am totally delighted and really looking forward to it. It's been a long time coming, and I am more than ready.”

On Q’s return, Patrick Stewart hinted that it comes at a "shattering moment” for Jean-Luc. But what does that mean?

Q’s comeback is nothing short of a game-changer, with deep ties to Picard, from the very beginning of the whole series.

In the larger context of The Next Generation, the Q Continuum — a race of timeless superbeings — put all of humanity on trial back in the year 2364. Throughout TNG and Voyager (as well as one-off appearances on DS9 and as recently as Lower Decks) the Q Continuum seems to lighten up a bit on humanity and its relative terribleness. By the end TNG, Q is more of an ally to Picard than an enemy. In fact, in the series finale of TNG, just before disappearing, Q almost whispers something about Picard’s future into his ear, but stops himself, only saying, “You’ll see!” With Q’s return, that hint could finally make sense.

Picard: Why Q’s return is a very, very big deal

There’s a bigger reason why Q’s return to the Picard timeline is strange. “The trial never ends” refers to the larger judgment of humanity. But, after the Picard Season 1 finale, Jean-Luc Picard is no longer a human being; he was turned into a Golem/android in “Et Arcadia Ego Part 2.”

If Q is still “putting humanity on trial,” how does that play out when Jean-Luc isn’t actually a human anymore? By becoming a non-organic lifeform, has Picard set something into motion about the evolution of life in the universe? Will Q have something to say about that?

What’s more, there’s the nebulous matter of “time.” In the teaser, Picard talks a lot about time and, specifically, “second chances.” It heavily implies time travel without outright confirming it. The words come paired with lingering shots of Picard’s model of the USS Stargazer, a ship he was in charge of before the Enterprise-D. In the backstory for TNG, Captain Picard had to order his best friend, Jack Crusher, into a deadly mission when they all served on the Stargazer. Beverly Crusher was widowed by this order, and Wesley Crusher saw Jean-Luc Picard as the guy who caused his father to die.

Could Q be taking Picard back to those events? It’s happened before! In the TNG episode “Tapestry,” Q takes Picard back to his earliest days as a young Starfleet officer and has him relive a bar fight in which Picard is stabbed through the heart.

Could something similar happen here? Will Q take Picard back to the Stargazer? If so, will Beverly Crusher (Gates McFadden) return this season as well? Her character was notably absent from Picard Season 1, and unlike Worf and Geordi, was not even mentioned in passing.

If Q is back, it can mean anything. But because Star Trek: Picard is focused on the character study of Jean-Luc himself, there’s a good bet that Q’s return to the Trek canon will be deeply personal.

Star Trek: Picard is set to debut sometime in 2022.