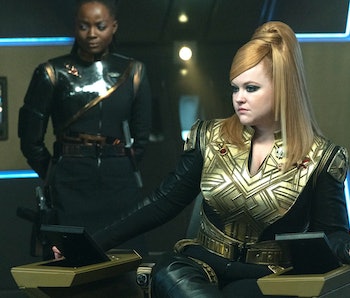 What do you call the opposite of an alternate dimension? Star Trek: Discovery's epic Season 3 two-parter sees Georgiou (Michelle Yeoh) return to the infamous Mirror Universe first visited in the classic 1967 Trek episode, "Mirror, Mirror." Before Discovery Season 3, our last visit to the Mirror Universe was the biggest twist in Discovery Season 1, when we learned Captain Lorca was an imposter, and that Mirror Georgiou was the Emperor of the Terran Empire.

When Georgiou (Michelle Yeoh) returns to reclaim her throne in "Terra Firma," she makes several choices that are different than the first time around. Does that new path mean she's created a divergent timeline? And if so, what would we even call the "new" Mirror Universe?

During an interview with Discovery writers Bo Yeon Kim, Erika Lippoldt, and Kalinda Vazquez, Inverse got some answers. Here's what Georgiou's actions might mean for the future — and past – of the Mirror Universe.

Spoilers ahead for Star Trek: Discovery, through Season 3, episode 10.

The big twist in "Terra Firma Part 1" found Georgiou crossing back to the Mirror Universe to before Season 1 of Discovery began. Lorca's coup to take over the Terran Empire hasn't yet started, and the USS Discovery also hasn't switched places with its evil counterpart, the ISS Discovery. Throughout both parts of "Terra Firma," we see Georgiou making different decisions as Emperor, in a clear attempt to reform the wicked Terran Empire into something wiser, more benevolent. In essence, Georgiou's time in the Prime Universe has made her into a better person, and she tries to bring some of that famous Star Trek love into the Mirror Universe.

For the most part, this doesn't work. Even though Georgiou tries to change everything, Mirror Burnham still betrays her in the end, and the Emperor is forced to kill her "daughter." Lorca still apparently disappears, which seems to imply he still made it to the Prime Universe and is staging a comeback, just like what we saw play out in Season 1.

Yet all the details of this Mirror Universe are different. In Part 1, Georgiou kills Mirror Stamets, who died a different way in the previous Mirror timeline. Plus, Mirror Burnham kills Mirror Landry and Mirror Detmer, who also had very different roles to play in the "original" Mirror Universe story. Georgiou also frees Mirror Saru from slavery, something which Carl/the Guardian tells her will help him save "a lot more" Kelpiens in that universe.

All of this really makes you wonder what happened to the original Mirror Universe. Did Georgiou create her own kind of temporal incursion?

"The best way to think of the version of the Mirror Universe we see in these episodes is as a special scenario created by the Guardian of Forever," Kim and Lippoldt tell Inverse. "Carl says he has to 'weigh' Georgiou’s case. Is she worthy of using this time portal -- something that should not be done lightly -- to cure herself and evade death?"

This means, that for the most part, this "new" Mirror Universe may not actually exist after Carl's test of Georgiou is complete. Next Generation fans might be reminded of the episode "Tapestry," in which Q shows Picard a version of his life in which he was not stabbed through the heart as a young man, which resulted in him not becoming a Starfleet captain. No fans actually believed that the universe in which Picard was a low-level officer continued to exist after Q finished that test, so it might easiest to consider Georgiou's "new" Mirror Universe in a similar light.

Still, the Discovery writers aren't ruling out the idea that another Mirror timeline might now exist — because it might.

"Whether this new version of the Mirror Universe creates an alternate timeline, and an alternate Prime Universe to go with it. Or whether it’s a pocket timeline that exists independently or something else our human brains can’t even comprehend -- only Carl can say," they explain. "Or maybe he won't say!"