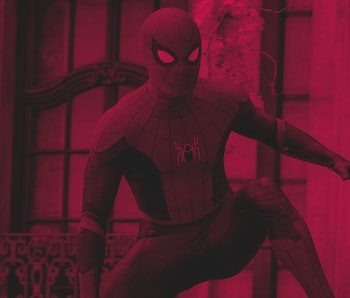 Marvel and Sony are keeping Spider-Man: No Way Home plot details as under wraps as possible prior to its December debut. The two studios have released just one trailer for the highly-anticipated superhero film — along with a handful of generic, spoiler-free images.

So to say that Marvel fans have been disappointed by the studios’ marketing strategy so far would be an understatement.

With only a few weeks to go until Spider-Man: No Way Home hits theaters, fans are still waiting to see a second trailer — or heck, even a TV spot — for the comic book blockbuster. Fortunately, while it’s still unclear when exactly Marvel and Sony will release more from Spider-Man: No Way Home, a pair of new alleged leaks reveal exciting details about both the film itself and its long-awaited second trailer.

The Leaks — Social media was hit with a batch of Spider-Man: No Way Home leaks this week, claiming to answer questions fans have long been asking about the Marvel Cinematic Universe film.

The first comes courtesy of the @spideysnews Twitter account, which tweeted that Spider-Man: No Way Home will be 2 hours and 39 minutes long. According to the tweet, the film’s runtime was revealed via a listing on a Brazilian ticketing website.

Elsewhere, a new 4chan post revealed what are, apparently, several key details about the second Spider-Man: No Way Home trailer. The post’s author claims that the film’s next trailer is nearly finished and will be released sometime around November 15-17, going on to state that the trailer does show — among other things — clear appearances from all five of the film’s rumored villains (i.e. Green Goblin, Doc Ock, Electro, Sandman, and The Lizard).

Additionally, the post mentions that the trailer will show Peter Parker (Tom Holland) fighting both Electro (Jamie Foxx) and Doc Ock (Alfred Molina). It will also allegedly features scenes showing a concerned Peter talking to an unknown character at a F.E.A.S.T. building and Doctor Strange (Benedict Cumberbatch) interacting with Ned (Jacob Batalon). Most importantly, the trailer will apparently tease appearances from both Andrew Garfield and Tobey Maguire’s Peter Parkers without outright showing them.

As is always the case with Marvel leaks like this, make sure to take all these claims with a fairly hefty grain of salt for the time being.

The Biggest Spider-Man Movie Ever — Assuming that these leaks are accurate, they give fans a much better idea of what to expect from both Spider-Man: No Way Home and Marvel and Sony’s joint promotion.

In other words, it sounds like the two studios plan on confirming as much about the film as many expected them to — namely, that it’ll feature a handful of villains from Sony’s past Spider-Man films, but not that Andrew Garfield and Tobey Maguire are also in it.

The film’s rumored 159-minute runtime isn’t all that shocking either. All of Marvel’s 2021 films have been over 2 hours long, with Eternals’ final, 156-minute runtime nearly matching Spider-Man: No Way Home’s alleged length. Given how many characters are said to be appearing in it, Marvel fans have long suspected that No Way Home will end up being one of the MCU’s longer standalone entries.

The Inverse Verdict — Until Marvel and Sony actually take the plunge and release more details and footage from Spider-Man: No Way Home, there’s no way of knowing how accurate these leaks are. That said, they certainly line up well with what many fans have started to expect from Marvel and Sony’s ongoing, surprisingly minimal promotion of the film.

Spider-Man: No Way Home swings into theaters on December 17.