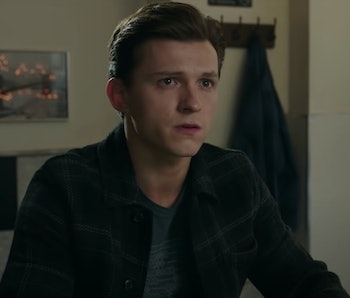 Are Tobey Maguire and Andrew Garfield in Spider-Man: No Way Home? Comic book fans seem confident that they are — despite Marvel, Sony, and the actors themselves all going out of their way to downplay the rumors.

With the film’s release date less than two full months away, fans are beginning to wonder whether the studios will confirm Garfield and Maguire’s roles ahead of No Way Home’s debut.

Though his appearance in the film has yet to be officially confirmed, new details about Spider-Man: No Way Home reveal one major scene in which Maguire could appear.

The Qualities of a Superhero — During a recent interview with Empire Magazine, Tom Holland revealed that Spider-Man: No Way Home contains “one of the coolest scenes” he’s ever shot. Opening up further, Holland revealed that it features himself, Marisa Tomei as Aunt May, Jon Favreau’s Happy Hogan, and a fourth character whose identity he wasn’t able to reveal.

“It’s four people sitting at a table, having a conversation about what it’s like to be a superhero, and it was amazing,” Holland told the outlet — sparking endless rumors and theories about who the scene’s mysterious fourth player might be.

However, while there are plenty of characters that could fill the scene’s fourth spot, this writer believes that the mystery figure may turn out to be Tobey Maguire’s Peter Parker. If so, the scene could very well be Spider-Man: No Way Home’s take on this memorable sequence from Sam Raimi’s Spider-Man 2:

Coming Full Circle — In the spirit of being totally transparent, this theory is very specific given how little we know about the Spider-Man: No Way Home scene described by Holland.

That he can’t say who the fourth character in the scene is, though, means it’s almost certainly someone Marvel and Sony have yet to confirm is appearing. That would suggest it’s Maguire, Garfield, or one of No Way Home’s rumored but still-unconfirmed villains, like Jamie Foxx’s Electro or Thomas Haden Church’s Sandman.

But it wouldn’t make much sense for one of the film’s villains to be the fourth player in the scene, given that Holland says it centers around a conversation about “what it’s like to be a superhero.” That detail suggests that the scene’s fourth character is someone who knows what it’s like. Alternately, though, the scene could be a debate between Holland’s Parker and one of the film’s antagonists about the merits of being a hero; that just doesn’t seem as likely.

Instead, it seems more feasible that the conversation will be between either Garfield or Maguire’s Peter Parker and the rest of the scene’s characters. While Garfield would certainly make sense for the scene, Maguire’s Peter Parker seems like a better fit. His Spider-Man films dealt more heavily with the cost and responsibilities of being a superhero than either Garfield or Holland’s films, which makes him someone capable of actually giving the kind of advice Tom Holland’s Peter Parker desperately needs to hear in No Way Home.

As the scene linked above demonstrates, Maguire’s Peter Parker has received more than his fair share of good advice in his lifetime. He should be capable of giving his own.

The Inverse Verdict — 2004’s Spider-Man 2 is one of the best superhero movies ever made — if not the best. And the film, among many other things, features one of the strongest speeches about the merits and power of comic book heroes that the superhero genre has ever seen.

For that reason, Marvel fans may want to prepare themselves for Maguire to give a speech to Holland similar to the one that Rosemary Harris’ Aunt May gave to him in Spider-Man 2.

Who knows? Maybe it’ll even be Maguire’s Spider-Man who ends up telling Holland’s Peter Parker that, “With great power, comes great responsibility.” As the only one of the three live-action Spider-Men who’s heard that line, he’d be a fitting choice to say it in the MCU.