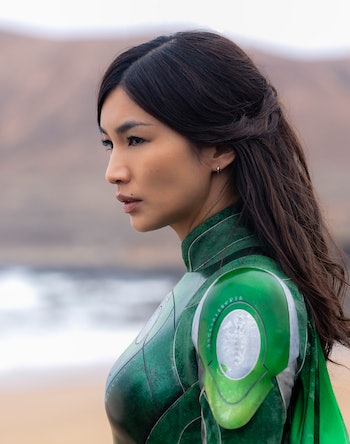 Watching a mighty Celestial appear in Marvel’s Eternals made me feel small.

Director Chloé Zhao has a talent for stimulating the senses by letting in the outside world. In her previous films, like 2017’s The Rider and 2020’s Oscar-winning Nomadland, Zhao captures human subjects who touch and feel their surroundings, forming a deep connection with the landscape.

This appreciation for nature’s majestic sprawl is crucial to all the characters in Zhao’s stories — even when, as in the case of Eternals, they’re not of this Earth.

Marvel’s latest cinematic offering, Eternals — which hits theaters November 5 — is both a wild change of pace for Zhao and a story that demands her distinct voice. Within this centuries-spanning, globe-trotting epic, ancient alien beings are made to feel authentically human by the symphony of dirt, water, sun, fire, and wind that encircles them — and by the relationships that drive them.

When these heroes are dwarfed by even more titanic figures, we assume their perspective, that of ants at a picnic. The scale Zhao operates on across Eternals is vast, at times nonsensically so. But when Zhao’s aliens develop a profound intimacy with one another, that’s when Eternals shines the brightest.

Eternals adapts comic book legend Jack Kirby’s sci-fi creations of the same name, a race of ancient aliens with extraordinary gifts and the power of immortality. Their sworn enemies are the Deviants, monstrous “accidents” in the evolutionary process. Months after the events of Avengers: Endgame, an ancient plan is put in motion, forcing the Eternals to finally act after centuries spent hiding amid humanity’s huddled masses.

While Eternals is visually breathtaking and richly designed — making a compelling language of magical shapes and basking in the power of Celestials whose towering, unsettling presence feels legitimately Lovecraftian — it has the unenviable task of translating Marvel’s most complex property to date. Few comic book readers know the Eternals; even fewer have read Kirby’s original comics (as opposed to the more accessible Neil Gaiman miniseries). Spider-Man movies have it easy by comparison.

So it was a masterstroke on Marvel’s part to hire Zhao, who specializes in detailing near-mythical lifestyles in ways that feel grounded and recognizably human. But Zhao’s film ultimately struggles under the weight of its assignment, unable to dole out all the exposition necessary for its story. Far from communicating all its context in an organic and rhythmic manner, Eternals begins with a Star Wars opening-credits crawl, a noble attempt at achieving grandeur that contains so many proper nouns you’ll wish the projectionist would hit pause. From there on, the rest of the movie dispenses whole mountains of exposition with dutiful solemnity, all the way up to its eyebrow-raising, head-scratching final moments.

Forcing Zhao into the Marvel house style, the rest of the film fares no better. An introductory CG battle begins and ends with a thud, while a convoluted but rote murder mystery with a telegraphed “twist” plagues the visually beautiful experience of Eternals. All the rudimentary Marvel tropes on display undermine Zhao’s labored efforts to pursue more naturalistic filmmaking; her style is revealed to be fully incongruous to a story its studio only knows how to keep telling artificially.

While Zhao excels in visualizing texture, she’s unable to communicate with Eternals what else makes her interesting as an artist. There’s little of the natural lighting that distinguished her past movies (save for a few pretty sunsets), and only occasionally graceful Malickian camera movement that brings us closer to the characters. Both of these feel like flourishes. Tragically, Eternals is another example of a fine director stifled within Marvel’s confines, not the studio expanding its creative parameters to accommodate a new voice.

At least the characters are fun. The many heroes of Eternals are diverse in appearance, power, and personality. It’s easy enough to follow along with such engaging characters across their 7,000-year journey.

A vast ensemble of A-listers and charismatic character actors make up Eternals, each afforded their own arcs and breathing room that lets them shine as performers. Salma Hayek, Angelina Jolie, Brian Tyree Henry, Lia McHugh, Kumail Nanjiani, Richard Madden, Don Lee, Barry Keoghan, and Lauren Ridloff — who performs in American Sign Language (ASL) — all play Earth’s designated Eternals, who have found corners in human society to hide in. Some are reclusive, while others quietly have families. At least one dares to be a celebrity: Nanjiani’s Kingo, a movie star at the center of a colorful, stereotypically Bollywood dance number.

But the true “star” of the film is indisputably Gemma Chan. As Sersi, a museum curator who can manipulate matter, Chan’s role is where Eternals finds its emotional gravity. While superficially a superhero movie, Eternals is spiritually a love story. Sersi spends her screen time torn between two men: Madden’s Ikaris, an Eternal with powers not unlike DC’s Superman (this comparison is verbalized at one point), and Kit Harington’s Dane Whitman, a museum scholar to whom there’s more than meets the eye. (Yes, it’s a mini Game of Thrones reunion, and Eternals has a bit of fun with its actors’ shared resumes.) Soaring above both actors is Chan, a deeply engaging performer whose Sersi carries the weight of responsibility, duty, and love. You can read the emotional essence of Eternals on Chan’s face.

Gorgeous and ambitious, Eternals takes big swings that are admirable though they fail to connect. It isn’t my favorite Marvel movie but it’s one I’m looking forward to rewatching. Though unlike most other Marvel movies in that it’s less ascetic and features the studio’s first lovemaking scene, Eternals finds itself beholden to a rigid formula in maddening ways.

And so Eternals isn’t a testament to Zhao’s creative vision so much as a cautionary tale for Marvel, which must allow visionary artists to follow their instincts instead of saddling them with limits. The tender human touch that characterized Zhao’s past work is but a faint whisper in this sci-fi superhero spectacle. Her characters and the wide-open vistas she positions them in are the only signs of life in what remains a disappointingly plastic universe.

Eternals will open in theaters on November 5.