“This was always meant to end on a cliffhanger.” 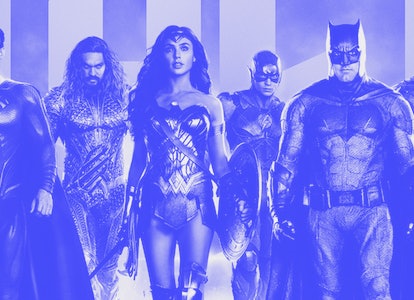 Four years later, Zack Snyder finally gets his wish: Justice League, exactly as he always wanted it — and based on the ending of the four-hour HBO Max epic, Snyder clearly always wanted to leave the audience wanting more.

At the end of Zack Snyder’s Justice League on HBO Max, the newly-formed Justice League — with the resurrected Man of Steel, now in a sleek black and silver costume — thwart Steppenwolf and intimidate the fearsome Darkseid into staying put in his hellish red planet of Apokolips. The portals close, and the good guys win the day. Happily ever after, right?

After a teaser that (re)introduces Jessie Eisenberg as Lex Luthor and Joe Manganiello as the mercenary Deathstroke, Bruce Wayne (Ben Affleck) suffers from a “Knightmare,” continuing the cryptic visions in 2016’s Batman v Superman: Dawn of Justice. In this glimpse at a potential grim future, Batman sees a world where Superman (Henry Cavill) has gone berserk after the death of Lois Lane. Making mad matters even worse, Batman sees himself in an alliance with a slew of fellows — including, chillingly enough, Jared Leto’s Joker.

So, that’s it? That’s the end of Snyder’s time in the DC Universe? It sure looks that way — and, speaking with Inverse over a video call, a visibly satisfied Snyder confirms it was always his plan to end Justice League on this very shocking note.

“If there’s never another DC movie that I make, so be it.”

“Listen, if there’s never another DC movie that I make, so be it,” Snyder tells Inverse. “That’s been kind of the mantra Warner Bros. has kind of struck, and that’s fine. I have complete respect for that decision. But, I wanted fans to get at least one step further. This was always meant to end on a cliffhanger, and that’s how the movie was designed. And I just felt like this was a great way to sail out.”

For Snyder, those words — “sail out” — speak to the veteran filmmaker’s laidback demeanor. Speaking with Inverse in the thick of a long day of interviews, Snyder appears shockingly relaxed, almost zen-like as he reflects on his vision of the DC Universe. For Zack Snyder, he is indeed sailing away from the likes of Batman and Superman, even as he leaves viewers sailing toward a deeply complicated, wide-open ending.

The exact inspiration for the closing Knightmare comes from Snyder’s 2013 movie Man of Steel as well as the director’s own wishes to shoot a scene with Batman and Joker, according to what Deborah Snyder, Zack Snyder’s longtime producing partner and wife, tells Inverse.

“This harkens back to BVS,” says Deborah Snyder. “Zack really wanted to do a scene with Batman and Joker. This was our last hurrah. He was like, ‘This is my last chance. I’m going to get to do this scene.’ And trying to work backward and think like, ‘Okay, how do I fit that in?’ He felt like [it should happen in] the Knightmares, which was the language we have had in all the movies starting with Man of Steel with the nightmares with the skulls.”

“It’s a language that we’ve cultivated,” she adds. “It just made perfect sense to carry it over and do this with both Batman and Joker.”

“Zack really wanted to do a scene with Batman and Joker.”

The Knightmare scene may ignite a new controversy within the superhero fandom — namely, that Batman was right for targeting Superman back in Dawn of Justice, considering the Man of Steel’s central role in the future apocalypse. But the Snyders say that’s not the case.

“I don’t know I would interpret it that way,” says Deborah Snyder. “I feel like Superman comes back and we see him for the hero he is. What could happen in the future I don’t know. But I know in the reality, because those are dream sequences, I like to think we get to see Superman realize what the world is. We’ve adopted him in our world. By the end of the movie, he’s also adopted us at the same time. He’s adopted humanity and has chosen to come and stay and fight for us.”

Even if Superman poses such a “Knightmare-ish” threat, the Justice League now has a new all-powerful alien hero at its disposal: Martian Manhunter.

Like Superman with the Kryptonians, J’onn J’onzz, a.k.a. the iconic DC superhero called “Martian Manhunter,” is the last survivor of the Martian species with an array of superpowers, including shape-shifting. In Zack Snyder’s Justice League, fans learn that U.S. Secretary of Defense Calvin Swanwick (played by Harry Lennix), a presence since Man of Steel, is Martian Manhunter. What started out as a fan theory Snyder liked and even storyboarded (in 2019, Snyder shared his illustrations on Vero) has become canon.

The Martian Manhunter was one of the founding seven members of the Justice League of America, who first teamed up in the pages of The Brave and the Bold #28 in March 1960. According to Zack Snyder, Martian Manhunter was destined to play a massive role in his growing mythology, potentially as someone who could rival Superman — but there were fundamental reasons why the character couldn’t land sooner than the Justice League ending.

“My feelings on Martian Manhunter is that because he’s so powerful, that’s why he could hibernate,” says Zack Snyder. “We have to make him weirdly a sideline player for a little while, at least. His influence would be so strong, and I think he has some sort of PTSD from what happened to him and his people.”

If the film series continued past Justice League, Snyder says the plan was for viewers to watch the Martian Manhunter “come up and bring his powers to bear against Darkseid.” As it stands, the character’s quick introduction to Batman is the best we’re going to get.

Beyond Martian Manhunter, the Justice League already has an all-powerful hope in the effort to stop both Darkseid and the Knightmare: Barry Allen, played by Ezra Miller.

Wielding the Speed Force and forced to run faster than he’s ever run before, The Flash gains the ability to use his speed to reverse time toward the end of the Snyder Cut. In the fight against the villainous Steppenwolf, it’s useful. But comic book fans fear Barry’s abilities may lead him down a difficult road.

In the 2011 story Flashpoint, Barry uses his speed to run back in time and prevent the murder of his mother. This leads to a darker alternate timeline where Bruce Wayne isn’t Batman, Superman wasn’t raised by the caring Kents, and Atlantis and Themyscira waged a bloody war. (This too is seeded in the Snyder Cut, with Diana Prince and Arthur Curry acknowledging tensions between their people.) It is all but confirmed the 2022 movie The Flash will take inspiration from Flashpoint, and the Snyder Cut paves a very smooth road towards those events taking place.

“I fought pretty hard to put that in the movie.”

“That was one of the first ideas I had,” Zack Snyder tells Inverse about Flash’s time-travel powers. “I fought pretty hard to put that in the movie. This idea of him running back time, it was great because it allowed for events to happen that you can then slightly reverse. And it’s a great McGuffin. And a great trope. So I felt we should use it to its utmost.”

What’s more, Flash’s newfound powers were going to feed directly into Snyder’s future plans, such as the world glimpsed at the end of the Snyder Cut: “That’s exactly what the Knightmare world eventually is: the complete completion of that vision of Flash’s ability to jump time.”

For those who want more from Snyder’s Justice League vision, time-travel would certainly be useful. But even reviewing Snyder’s comments about this movie and the potential future could, if read the right way, generate some hope.

In his own words, Justice League was meant to end on a cliffhanger, setting up the next film in the series. With so much hype generated around the Snyder Cut, could that sequel still come to life?

“Right now, Warner Bros. and DC are going in a different direction with the films they have in development,” says Deborah Snyder. “We are just so happy we got to complete this journey and bring these characters together and restore Zack’s original vision for Justice League. That’s what we’re focusing on.”

“We haven’t been able to take a breath yet,” she adds. “We’ve just finished the film and now we’re into the press. It’s nice to just relish we were able to see this happen. It’s a good place to be for us.”