“How many of you are there?” 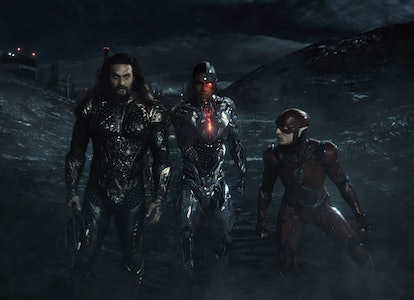 With over four hours of footage, Zack Snyder’s Justice League boasts more than twice the runtime of the version released in theaters. It’s a safe bet, then, that the remodeled DC movie will offer audiences far more than they got to experience first time around.

Ambitiously, Snyder was attempting to tell one long story from 2013’s Man of Steel through Justice League — and beyond, with plans for sequels that never came to pass. It explains why there are so many plotlines from Man of Steel, Batman v. Superman: Dawn of Justice, and even David Ayer’s Suicide Squad movie that still need resolution, as far as DCEU super-fans are concerned.

Will the Snyder Cut finally tie these lingering threads together? If so, here are 7 of the burning questions we need answered in Zack Snyder’s Justice League.

1. Is Superman Actually The Last Son of Krypton?

In Man of Steel, Clark Kent discovers the truth about his origins -- as well as finding his Superman costume -- in a scout ship sent from Krypton that arrived on Earth some 18,000 years earlier.

He also finds the corpse of one of the ship’s pilots, but a second chair is empty, possibly suggesting that another Kryptonian was wandering Earth at some point in history. Could they still be alive, and play a part in Justice League somehow?

2. What Was Lex Luthor’s Metahuman Endgame?

As shown in Batman v. Superman: Dawn of Justice, Lex Luthor is far ahead of the curve when it came to superhero movie fandom.

As part of his obsession with potential metahuman threats, he amasses surveillance video of Wonder Woman, Cyborg, Aquaman, and the Flash. After being stolen by Batman, the videos eventually lead to the creation of the Justice League, but what was Luthor originally planning to do with them, and does his original scheme play into any future Legion of Doom plans?

3. What Did Lex Know and When Did He Know It?

Things don’t go so well for Luthor in Batman v. Superman; he ends the movie behind bars, possibly insane, and talking about an oncoming extraterrestrial threat.

“The bell’s already been rung. And they heard it. Out in the dark. Among the stars,” he says, vaguely.

It’s not too much of a jump to assume that he’s talking about Darkseid and the events of Justice League in either incarnation, but just how much does he actually know -- and why does he seem so happy about it? Lex clearly knows more than anyone else in these movies; let’s find out just how much.

4. Just What Was Batman’s “Knightmare” All About?

Perhaps the most memorable part of Batman v. Superman that doesn’t include the word “Martha” was the “Knightmare” section in the middle of the movie.

In the sequence, Batman has what appears to be a dream in which he’s captured by Parademons before being confronted by a very upset Superman -- and then he wakes up and meets the Flash from the future, who warns him that he was right about Superman all along, without offering specifics. It feels like heavyhanded foreshadowing — foreshadowing something that never happens, at least not in the version of Justice League that made it to theaters.

The trailer for the Snyder Cut reveals we’re returning to this subplot at some point, but will it get properly explained, or will it just be a second tease of what’s to come? In either case, will we finally get an explanation as to whether it was actually a dream, or if Bruce Wayne developed some kind of bat-like premonition power?

5. Whatever Happened to The Boy Wonder?

With Batman and the Joker once again face-to-face in the trailer for the Snyder Cut, will we get the backstory of the dead Robin teased via a costume reveal in Batman v. Superman? Surely there should be some reference to the fact that one of them seemingly murdered the sidekick of the other… or is that the kind of thing you don’t mention when there’s a brand new apocalypse on the horizon?

6. Will There Be A Connection to Suicide Squad?

The mid-credit sequence of 2016’s Suicide Squad sees Amanda Waller pass classified information on the future members of the Justice League to Bruce Wayne… but it’s not only Aquaman and the Flash glimpsed as part of the dossier: the Squad’s own Enchantress is also seen. Was the Enchantress originally part of Batman’s team, and if so, does she show up in Snyder’s version of Justice League?

7. Did The Earlier Movies Set Up A World in Peril?

By the time Steppenwolf shows up in Justice League, the world has gone through a couple of significant changes.

In Man of Steel, large parts are terraformed by Zod’s army, and in Suicide Squad, Midway City is transformed into a supernatural monster-filled hellscape — and in both cases, it’s unclear if they were ever properly restored. What if each of these shifts in the make-up of the world are preparing the way for an invasion from Apokolips?