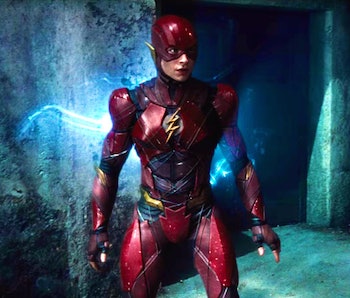 The Flash solo movie has been delayed so many times that it’s become somewhat of a joke among fans that its release wouldn’t happen until 2035 at the earliest. The film was first announced back in October 2014 (shortly after The CW’s The Flash premiered) as part of the DC Extended Universe line-up. Ezra Miller was cast in the role of Barry Allen/The Flash, and the film was scheduled to hit theaters in 2018. Of course, that never happened.

But now, The Flash movie is within sight, with the fastest man alive finally making his way to the big screen. Here's everything you need to know, from the release date to the trailer to some very exciting casting rumors.

When is the release date for The Flash movie?

Mark your calendars for November 4, 2022. The Flash was originally supposed to hit theaters on July 1, 2022, but Warner Bros. initially moved up the date a month before bumping it to the fall due to the COVID-19 pandemic.

What’s the plot of The Flash movie?

There isn’t a whole lot of detail regarding the plot of the film. Andy Muschietti did confirm that there was a plan to incorporate the iconic Flashpoint storyline from the comics. However, fans should expect it to be different from what the comics and even The CW show have done.

In short, Flashpoint sees Barry running back to the past to save his mother from being murdered by his nemesis, Reverse-Flash. He wakes up in a world where he’s no longer married to his wife, Iris West-Allen, Aquaman and Wonder Woman are at war with each other, Superman is in a government prison, and Thomas Wayne is Batman.

Per The Hollywood Reporter, “The story is said to involve not just time travel but inter-dimensional travel.” That would definitely explain Ezra Miller’s cameo in The Flash portion of CW’s “Crisis on Infinite Earths,” a storyline that included the destruction and rebirth of the multiverse.

With that in mind, given some of the casting choices, it’s possible that The Flash movie will see Barry traveling to different Earths and timelines, which leaves room for plenty of storytelling possibilities.

Who is in the cast of The Flash film?

Ezra Miller is still on board to play the red-suited superhero, who he describes as “multidimensional, with human flaws.” Joining Miller is Ron Livingston as his father, Henry Allen. Fans saw Billy Crudup initially in the role when he appeared in Justice League. Maribel Verdú plays Nora Allen, Barry’s mother whose murder he prevents.

Despite this being a Flash movie, one other Justice League member will loom large in many ways. Ben Affleck returns to play this universe’s Bruce Wayne, despite everything that happened with the Batman standalone film. Director Andy Muschetti teases that “Batfleck” will have a substantial emotional throughline throughout the movie, considering both his and Barry’s mothers were murdered.

But that’s not all! After almost 30 years, Michael Keaton will be donning the cowl once more. He’ll play an older version of Bruce Wayne that lives in an alternate universe. Keaton played the Dark Knight in Tim Burton’s 1989 Batman film and its sequel, Batman Returns.

Perhaps the most exciting news is that Michael Keaton is in talks to reprise his role as Batman. Keaton played the Dark Knight in Tim Burton’s 1989 Batman film and its sequel, Batman Returns. Should the deal go through, he will reportedly appear in more than just The Flash.

Kiersey Clemons (Dope) was cast to play Iris West, the intrepid Central City reporter, and Barry’s long-time love in the comics. The actress filmed a scene for Justice League that was ultimately cut, so this will be her DCEU debut. Additionally, Sasha Calle plays Supergirl, the Kryptonian cousin of Clark Kent who, like Barry, has her own CW show (though she’s also played by a different actress).

Who’s the director of The Flash DCEU movie?

Seth Grahame-Smith was initially on board to direct but left the project in 2016. This was the start of The Flash’s rocky road towards production. Grahame-Smith was replaced by director Rick Famuyiwa (Dope, The Mandalorian), who made some headway on the film. While production was scheduled for early 2017, Famuyiwa ended up leaving The Flash, reportedly over creative differences.

The DCEU film was in a state of flux for years after Famuyiwa’s departure, with several directors reportedly eyed to helm the project between 2016 and 2019. Meanwhile, Miller made his debut as The Flash in Batman v Superman: Dawn of Justice. He appeared in a cameo in that movie before getting a bigger role in 2017’s controversial Justice League.

Is there a trailer for The Flash film?

Yes! Fans finally got their first look at The Flash movie at the 2021 DC FanDome event. You can check it out below.

Where is The Flash movie in the DCEU timeline?

Considering Affleck’s return to the role of Batman, it’s assumed The Flash takes place at some point after the two meet in Justice League back in 2017. But considering the movie's entire plot focuses on traveling through (and changing) the timeline, the answer may be more complicated than usual.

The Flash is scheduled to hit theaters on November 4, 2022.

This article was originally published on June 24, 2020