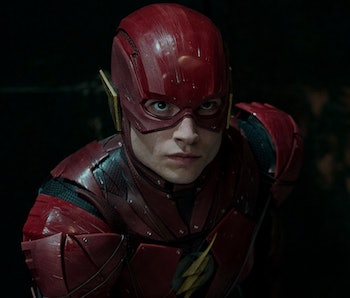 The Flash solo movie has been stuck in a development rut since 2014, going through a host of directors and screenwriters, including Dope director Rick Famuyiwa, The Lego Movie’s Phil Lord and Chris Miller, and even the film’s titular star, Ezra Miller. It was initially set to adapt the famous Flashpoint comic storyline, and after six years of behind-the-scenes reshuffling, the long-delayed film seems headed back in that direction. However, making a Flashpoint movie is a good and bad idea all at once.

Before getting into the nitty gritty, let’s dissect what Flashpoint is. The comic storyline kick-started DC Comics’ New 52 run in 2011. Barry Allen wakes up in an altered world where he is no longer The Flash, Aquaman and Wonder Woman are at war with each other, Superman is being held captive by the government, and Thomas Wayne is Batman. Later, Barry discovers he’s responsible for the altered universe because he’d decided to run back in time to save his mother from being killed by Reverse-Flash.

Speaking with That Hashtag Show, The Flash’s current director, Andy Muschietti, said the upcoming film would be a “different version of Flashpoint than you’re expecting.”

That’s a vague response, given that all comic storylines feel “different” when adapted to TV or film. Look no further than the The Flash TV show, which did its own version of Flashpoint in Season 3, which bore little resemblance to the original version. It’s possible Muschietti may stick to a story premised on time travel while leaving out the rest of the details.

Adapting any version of Flashpoint for the character’s first solo film outing is a risky move. While The Flash has already been introduced into DC’s Extended Universe and had a notable role in Justice League, general audiences still know little about the film version of Barry Allen.

The impact of Flashpoint depends upon our familiarity with The Flash and his world. Comic readers came to him as both a superhero and an average citizen. It’s hard to imagine anyone knows enough about DCEU’s Flash to care whether he goes back in time to reverse his mom’s death. At worst, The Flash would be a plot device in his own movie.

On the other hand, Flashpoint done correctly could be spectacular. Warner Bros. has had a difficult time with its shared universe and there’s been a lot of significant changes made that has affected the future of the DCEU. With Ben Affleck stepping down as Batman and Henry Cavill’s future as Superman unclear, The Flash could reboot the DCEU, tying together the current slate of films while breaking away from the past. One of the most appealing aspects of adapting Flashpoint is that it wouldn’t be yet another origin story. With a bit of creativity, The Flash could offer up a new take on the introduction of a superhero.

Until there’s more information about what The Flash movie will entail, though, the best option is to watch the animated film Justice League: The Flashpoint Paradox, the most faithful adaptation of the Flashpoint storyline, to get a taste of what’s to come.