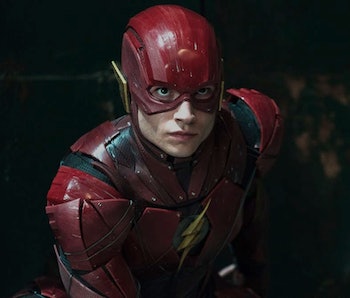 A DC superhero movie long thought dead just got a massive jolt of life. The Flash, a long-in-development-hell movie from Warner Bros., just got an official release date for 2022. That’s still a few years away, but you can’t rush the Fastest Man Alive.

Says Kit, The Flash will hit theaters on July 1, 2022. Matrix 4 will release on May 21, 2021, replacing the coveted Hollywood adaptation of the Japanese manga/anime Akira, now “officially off the calendar.”

Mortal Kombat, the reboot film adaptation of the popular fighting game franchise, moves up from March 5, 2021 to the worrying release date of January 15, 2021. January is historically a very difficult month for blockbuster movies, so it is concerning how Warner seems to view the project. Sources tell Inverse Mortal Kombat wrapping production this week.

But The Flash! Ezra Miller’s solo superhero film, which has seen a carousel of rotating directors and writers (including at one point Ezra Miller himself, teaming with comic book legend Grant Morrison to produce a draft), has had trouble kicking its feet up to make it to theaters. While setting a release date isn’t always a guarantee (again, just look at what happened to Akira), it’s still a big deal that Warner Bros. has given The Flash an actual spot on the calendar.

Based on the DC Comics of the same name, The Flash is expected to again star Ezra Miller as Barry Allen, a forensic scientist imbued with the powers of the Speed Force which enable him to run and move his body at lightning speed. Miller debuted as the character in a cameo appearance in 2016’s Batman v Superman: Dawn of Justice, and starred in 2017’s Justice League. The film’s director is currently Andy Muschietti, who may very well be the director to finally take The Flash to the finish line.

Production on The Flash is expected to begin in 2021, after Miller completes work in the next Fantastic Beasts movie.

In semi-related news, Keanu Reeves is expected to star in the next Matrix film, which opens directly against John Wick 4. May 21, 2021 will be a weekend of Keanu Reeves. But who’s complaining?