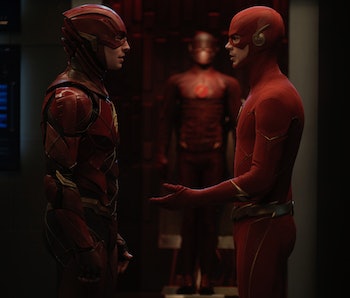 A crossover between the Arrowverse and the DCEU once seemed like a pipe dream, but the multiverse finally fulfilled that wish when Ezra Miller’s Flash appeared in Part 4 of the “Crisis on Infinite Earths” crossover, interacting with Grant Gustin’s Flash in the speed force.

After expressing admiration for each other’s suits and expressing surprisedthat they’re both Barry Allen, Miller’s iteration of the character disappeared, but not before dropping a few potentially intriguing clues about his solo movie.

Here’s what Miller’s cameo might mean for The Flash:

4. DCEU Barry Allen will officially start calling himself The Flash

Though Miller has been Barry Allen almost as long as Gustin — he was cast a few days after the premiere of The CW’s The Flash — the DCEU iteration of the character has yet to formally refer to himself by his known superhero moniker. That could change after “Crisis.”

During the scene, Arrowverse Barry says he’s “also the Flash,” to which DCEU Barry replies, “the what?” Then, his face lights up, repeating the name as though he likes the sound of it. It’s possible The Flash solo movie will confirm that Miller’s character was inspired to call himself The Flash after Gustin’s character gave him the idea. A seed has been planted, all thanks to “Crisis.”

3. Cyborg could still appear in the The Flash movie

Just as Miller’s Barry disappears in Part 4, he says that he “told Victor this was possible.” The line definitely sounded like a nod to Cyborg, whose civilian name is Victor Stone. Ray Fisher made a cameo as Cyborg in Batman v Superman before returning in an expanded role in Justice League. In the early days of developing DCEU’s The Flash — and before all the directors and screenwriters started dropping out — it was revealed that Cyborg would play a role in The Flash’s solo outing. The reference to Victor reignites the hope he will appear in The Flash movie.

2. DCEU Flash in the speed force might mean he’s in the middle of Flashpoint

While the movie isn’t scheduled for release until 2022 (for now), The Flash director Andy Muschietti confirmed the film will do the Flashpoint storyline, after all. Details are still scarce, but we know it’ll be a “different version” of the iconic comic storyline. Miller’s “Crisis on Infinite Earths” cameo, which occurred inside the speed force, suggests that DCEU Barry may have been time traveling. It’s possible he’s already in the middle of altering reality when he crosses paths with the Arrowverse’s Flash, ultimately leading to the events of Flashpoint.

1. Ezra Miller’s Flash costume could get an upgrade

When Miller appeared in Justice League, it was in a costume similar to the CW’s version. Sure, the lightning bolt emblem and the gold belt were all still present, but the DCEU suit was much bulkier and armor-like than Gustin’s. DCEU Barry thought so, too, and commented on the breathability of his counterpart’s costume. It’s possible Miller’s Flash could alter his costume, upgrading it for flexibility while maintaining it for its current safety standards.

It will be a while until The Flash movie is released, but it was fun to have both versions of the character interact in “Crisis on Infinite Earths,” confirming the DCEU’s existence in the Arrowverse and vice versa, connecting the two in a whole new multiverse for good.

The Flash is set to hit theaters on July 1, 2022. All five episodes of “Crisis on Infinite Earths” are currently available to watch on The CW’s app.