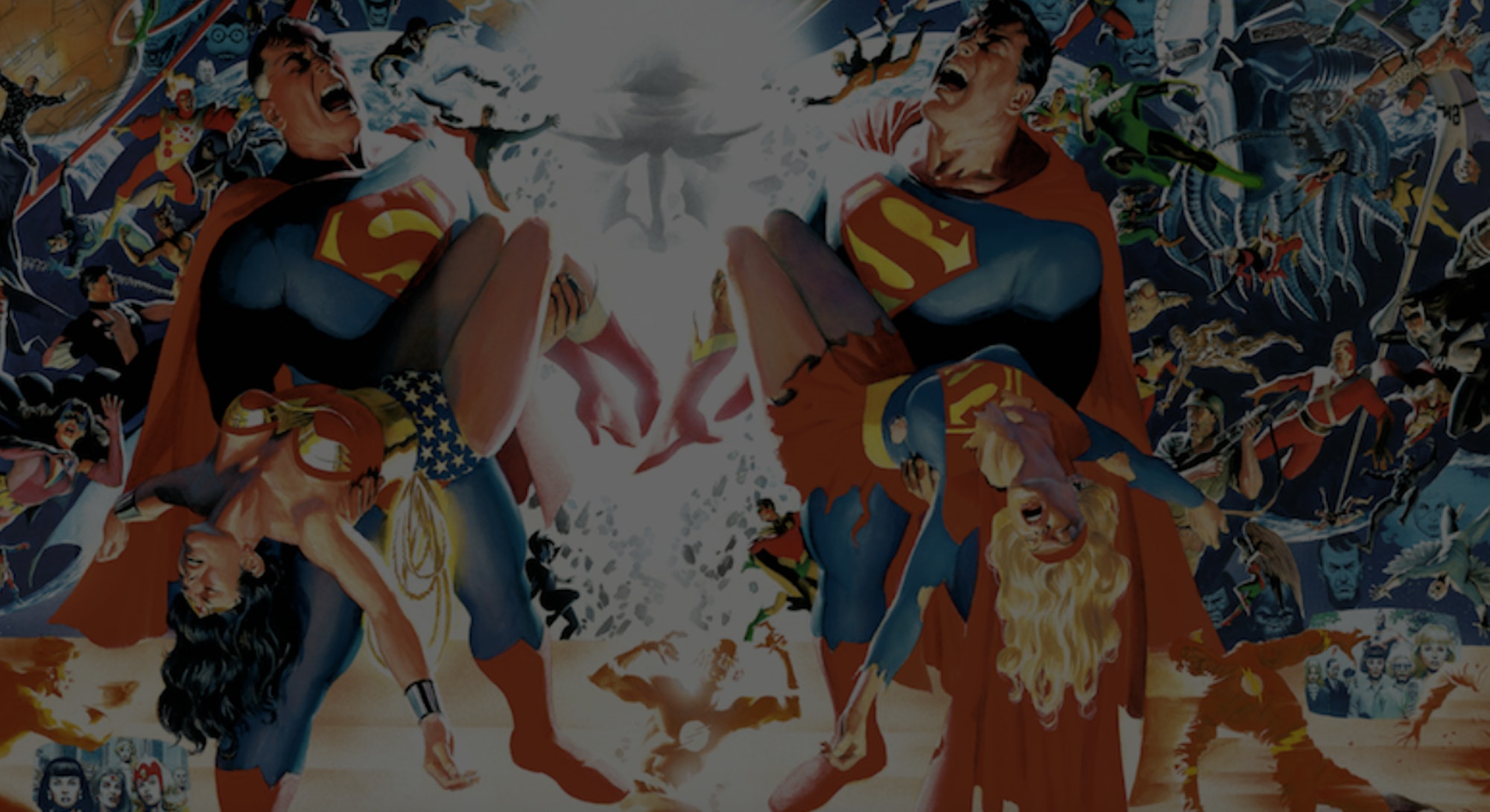 We take for granted today’s consistent output of blockbuster movies where superheroes hang out and fight evil as a team. That’s not how it was 35 years ago.

Then, Marv Wolfman changed everything.

“Back then, you didn’t, you never had every single character meet,” the comic book author and architect of DC’s Crisis on Infinite Earths tells Inverse. “No one had done such a team-up before. We broke the rules because it had never been done.”

In 1985, DC Comics was in a crisis. A distant second in the comic book industry, the historic publisher was losing readers to the more modern, and more simple, Marvel Comics. While Marvel had a single continuity set in the most familiar of cities, New York, DC’s emphasis on parallel Earths and rewritten timelines made it hard for just about anyone to follow the adventures of Batman, Superman, and Wonder Woman, even for just 75 cents an issue.

So Wolfman, an exclusive talent for DC following his exit from Marvel, pitched his editors an ambitious idea: Let’s blow it all up and rebuild from the ashes.

Together with his artist-collaborator George Pérez, still fresh from their partnership over their best-seller The New Teen Titans, the two unleashed Crisis on Infinite Earths, the biggest comic book crossover ever.

Here’s the plot, in a nutshell: An alien menace known as the “Anti-Monitor” seeks to destroy DC’s multiverse, world by world. Heroes and villains from DC’s past and present come together as one to stop their own annihilation.

A huge gamble for DC due to the uncertainty of its creative scale and uncommon limited series format, Crisis on Infinite Earths left profound ripple effects not just for the DC Universe but superhero pop culture forever.

That brings us to 2020. On January 14, The CW airs the final two episodes of “Crisis on Infinite Earths.” As ambitious as the comic it’s based on, “Crisis” wrangles together the stars of the TV shows Arrow, The Flash, Supergirl, Legends of Tomorrow, Black Lightning, and Batwoman, plus dozens more DC characters who’ve leapt from the comic book page and onto television. Despite some tremendous liberties due to circumstances, the TV special’s plot pretty much mimics the comic. Actor LaMonica Garrett portrays Wolfman’s signature character from the series, the Monitor, and his evil brother, the Anti-Monitor.

In an interview with Inverse, Wolfman reflects on the circumstances that led to creating Crisis on Infinite Earths with Pérez, his work on the TV adaptation, and why he really doesn’t mind all the big changes.

INVERSE: Simply put, what’s it like having a comic book you made 35 years ago become a TV special?

MARV WOLFMAN: Incredible. When we wrote and drew Crisis back in 1985 we never expected it would be done under any circumstances. Movies, TV, pop up books, whatever else. We just thought it was a comic leading into recreating DC. So to see 35, 37 years later, it still resonates, and people wanted to make a version of it for TV, I was thrilled. [They’re] breaking all the rules as we did.

What do you mean by “breaking the rules”?

You never had a storyline that totally changed the status quo. Things would come back to normal, and that didn’t happen with Crisis. Characters actually died. Yes, 25 years later they came back but they really died and affected the DC Universe. All these characters were changed. All the realities were changed. That had never happened before.

And they’re doing the same thing on TV. There’s never been a five-part crossover on TV with five separate shows. Usually when there’s a crossover it’s one or two shows, at most. This is five separate shows, hundreds of other characters, everything being changed in a completely different way.

In your foreword for the trade paperback collection of Crisis on Infinite Earths, you said that the popularity of the TV miniseries format in the ‘80s influenced the story. What was it about that limited series structure that attracted you?

I was a big fan of the TV show The Prisoner starring Patrick McGoohan. That was the first time I had seen a limited-run show. Usually [these] shows were a movie or a movie [told] over several weeks, but The Prisoner was a regular TV series told in 17 chapters with a beginning, middle, and end. We had never done that in comics.

Back then, comics were sold on newsstands. You didn’t get sales figures until maybe six to nine months later. That means nobody did crossovers or complete novels to a great degree, because by the time they got the sales figures they’d maybe discover nothing had sold. So they didn’t bother. It just wasn’t done in comics.

Once the direct market came in and people bought the books, you suddenly could have a limited series because these were aimed at fans and dedicated readers. Not just somebody picking it up on the stands.

How do you feel about the changes the TV shows have made to your comic? Do you feel there was one specific thing from your comic you wished made it to TV?

No, not specifically. We are very different entities. Doing a five-part television show requires so many people saying yes. Comics, we didn’t have that much of a problem because DC owned everything.

This is a difference case, a different set of heroes, a different need. We had Superman affected by Supergirl, certainly, but we were solving a very specific problem. They’re doing a storyline that affects them in a different way. It’s a different format. A different entity.

George and mine’s comic is exactly what we wanted to do as a comic. What they want to do as a TV show is just wonderful.

To your mind, what is the single biggest change that gives the comic its own identity apart from the TV show?

That’s hard to tell because only three [episodes] been shown so far. I did work on the fourth one and partially on the fifth. Green Arrow was not that big in the comic. Supergirl was obviously incredible in the comic, her entire future was determined in that and that’s not going to happen here. It’s a different type of situation.

They’re telling that story the best that story could be told. So what they do or don’t do is not something I think about. I just want to see them do it the best possible way they can do it, and they are.

You’re a prolific comics writer who has also done TV, including Transformers. What was your experience working with the producers for “Part 4”?

Care to tease what your scene involves in “Part 4”?

"We do see the origin of the Monitor and the Anti-Monitor. That’s huge.

We do see the origin of the Monitor and the Anti-Monitor and I think that’s huge. When you think about what those characters are in the comic, how big it is for a TV show to do that.

How else did you work with the producers? Did you act as consultant in any way? Did they take you for lunch in Hollywood?

They called me in for a two hour conversation with all the showrunners and writers. The idea was to talk about what made Crisis what it was, and what we were trying to do. I must have spent an hour or so telling them everything. And the next hour was answering questions. They were deep into it, they wanted to know what certain things meant, why things were done in the original, so they have an understanding how those could be followed or altered while still accomplishing the same goals.

Was this the first time that Crisis on Infinite Earths was ever attempted for adaptation? To your knowledge has there ever been attempts for a different movie or special?

Yeah. This is the first time it’s been adapted. This was such a daunting concept to deal with that it would require real plans and showrunners such as Marc [Guggenheim] and Greg Berlanti to think they could do it. It’s so big. To actually manage it to make it work is incredible.

I wrote a Crisis novel back ten, fifteen years ago that was the story through the point of view of The Flash. An audiobook of the novel was done, 20 different actors all playing specific roles.

LaMonica Garrett, who plays the Monitor, told me you met him at a convention. What was your impression of him?

I thought he looked exactly like the character. Meeting him in real life, I’m 6’2” and he towers over me. He looked like the character! He really understood who this was before he got cast. He was into it and he knows what he was doing.