“Power just makes a person more of themselves, right?” 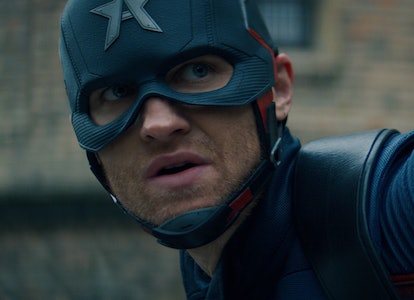 John Walker is not Captain America. Okay, technically he is. Walker wears the mantle, Walker wields the shield, but he’s nothing like the man who wore them first.

Walker’s worthiness (or lack thereof) in the shadow of Steve Rogers was already plain as day from the moment he arrived in The Falcon and the Winter Soldier, met with instant disapproval from Sam Wilson and Bucky Barnes. But if there were any lingering doubts about Walker — that he’s not so bad, that he should just get a chance to prove himself? Those doubts are as dead as ...

... well. Finishing that sentence spoils Episode 4 of Falcon and Winter Soldier, doesn’t it?

With so much in the air following Episode 3 — the return of Sharon Carter, the debut of Dancing Zemo, the presence of Ayo from Wakanda — we should be really careful about what we say next. Give yourself a moment to process all that’s happened recently on the Disney+ Marvel Cinematic Universe series, and then let’s dive into it, spoilers and all.

Major spoilers for Falcon and Winter Soldier Episode 4 ahead.

In Falcon and Winter Soldier Episode 4, John Walker finally accepts a new piece of the Captain America legacy: the super-soldier serum. It does not go well.

Walker and partner Lemar Hoskins, alias Battlestar, track Sam, Bucky, and Zemo down in Lithuania, and insist on working together to stop the Flag-Smashers. When they join forces, Walker clearly disagrees with how Sam wants to resolve the conflict. Sam attempts to take the peaceful approach, making significant headway with Karli Morgenthau. Walker ruins these peace talks, escalating the philosophical debate into a physical one.

Worth repeating: it does not go well.

Walker’s attempt to forcefully engage the Flag-Smashers fails spectacularly, even as he scores one key victory: possession over the last vial of super-soldier serum, the only dose that Zemo himself does not destroy.

Walker spends time debating whether or not to use it. After talking it through with Battlestar (without owning up to owning the serum), Walker decides it’s best for him to go “Full Captain America.” He should have listened to another pop culture icon’s words of fearsome wisdom: “Tread lightly.” Walker ingests the serum, and breaks bad, using his newfound powers to battle the Flag-Smashers in bone-breaking fashion.

During the final raid on the Flag-Smashers, Walker loses one of the only people tethering him to reality: Battlestar.

At first, Lemar is taken off the battlefield when he’s ambushed by the Flag-Smashers, leaving Walker alone, until Sam and Bucky join up in time for the fight. Lemar frees himself in time to rejoin the fight — and it turns out, going up against Karli is a fatal move. The leader of the Flag-Smashers movement throws Battlestar across the room with such force that he hits a concrete column and dies on impact.

Read all of our Falcon and Winter Soldier coverage here.

It’s a brutal scene, both in terms of its bone-breaking impact, as well as its emotional impact on all involved: Karli, horrified with her own actions; Sam and Bucky, left to watch the only good man in the new Captain America’s squad die; and Walker, who has now lost his best friend.

In one of his final scenes, Battlestar left Walker with some important words: “Power just makes a person more of themselves, right?” His philosophy echoes Abraham Erskine, the inventor of the super-soldier serum. Battlestar believed in Walker, saw the good in him, and tried to bring that out. Dead and gone, he’s unable to keep his partner in check — and that’s very bad news for everyone involved.

In the final harrowing act of the episode, John Walker gets revenge against the Flag-Smashers — but not the one who killed Battlestar.

Fueled by a deadly cocktail of super-soldier serum and unfiltered rage, Walker bursts out of the confines of Flag-Smasher HQ and into the light of day. He runs down one of Karli’s closest Flag-Smasher allies, and executes him in a public square.

The scene is a disturbing one, on a variety of levels. Onlookers watch in horror as a man draped in Steve Rogers’ legacy uses the all-powerful vibranium shield to kill another person without any mercy. Walker slams his shield into the Flag-Smasher, over and over and over again, until both he and the signature weapon are covered in blood. Sam and Bucky witness the incident, as does Karli, as does the world; the whole thing is captured on film, and one can only imagine the ramifications.

Will this be the end of Walker’s run as Captain America? Or will it be swept under the rug by a government that’s failed its people so many times, letting Walker as Cap continue to roam free with impunity? If nothing else, it’s a gateway for Sam’s journey toward reclaiming the Captain America name, as several times throughout the episode, he shows his worthiness for wielding not just Steve’s shield, but his legacy. With only two episodes left, time’s running out for him to reclaim the shield.

Beyond the Walker of it all, Falcon and Winter Soldier dealt with many other storylines, such as the arrival of Ayo and the Dora Milaje.

The episode literally begins in Wakanda, six years earlier. We learn Ayo and Bucky have a long history together, as she was instrumental in reversing the Winter Soldier programming, along with Black Panther’s sister Shuri. The flashback is an emotional one, as we watch Bucky win out over his programming, no longer succumbing to the ancient code-words that defined him for so many years.

But the happiness is short-lived, as Ayo warns Bucky to surrender Baron Zemo in eight hours, or else. Eventually, the full force of the Dora Milaje descends upon the crew, trying to bring in Zemo. They end up in a distracting battle against Walker and Battlestar instead, which allows Zemo to escape. The Dora Milaje are last seen leaving in pursuit of their enemy, their collective fates unknown.

What's next for Zemo and Ayo? Given where we are in the show right now, it feels possible that the story of the Dora Milaje and perhaps even Zemo himself won’t continue here in Falcon and Winter Soldier, but in the upcoming untitled Disney+ series set in Wakanda. Regardless, there’s so much still on the table, from dealing with the rising Walker threat, confronting and stopping Karli and the Flag-Smashers, unmasking the Power Broker (the case for Sharon Carter keeps building; who other than super-villains have their very own private satellite access?), and Sam’s eventual ascension to the Captain America throne — and only two episodes left to accomplish it all.