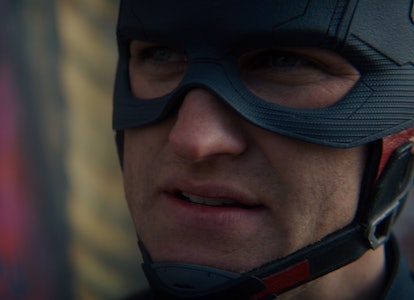 As The Falcon and The Winter Soldier heads into its back half, one thing has become obvious: John Walker, also known as the new Captain America, is the best character of 2021 so far — and, perhaps, the ideal lead for Marvel’s post-Endgame status quo.

The Marvel Cinematic Universe’s version of Walker isn’t exactly the same as his comic book inspiration. Wyatt Russell’s square-jawed soldier didn’t start off as a superpowered rival for Captain America, nor was he placed into patriotic duty by a shadowy commission of men in power suits headed by the Red Skull — well, not that we know of, anyway.

Instead, this Walker is a hyper-capable, highly decorated soldier with his heart in the right place, who seems to know the weight of what he’s getting into. “Everybody in the world expects me to be something, and I don’t wanna fail them,” he says in Falcon and the Winter Soldier Episode 2, making it clear for everyone: he’s a good guy under near-impossible pressure.

That, at least, is in keeping with the comic book version of Walker. Character co-creator Mark Gruenwald wrote in a 1993 editorial that he intended the character to be a “tortured, introspective, Cap-respecting soldier-patriot,” and sympathetic for readers; all of that comes across onscreen during the first half of Falcon and the Winter Soldier… for some of us at least, at least.

Judging by social media, however, there’s a section of fandom — exemplified by tweets arguing that “the villains are more likable than John Walker” or “At least Zemo is cultured. John Walker is just a dick” — that can’t get over the idea that John Walker isn’t Steve Rogers, and can’t forgive him for it either.

Walker being an imperfect hero has become all the more reason to dislike him. But that’s what makes Walker so interesting: the vitriol towards him has turned this Captain America into a lightning rod, arguably more complex and interesting than either of the show’s bickering leads or its primary antagonists.

Part of the reason for this may be that Walker is a metaphor for the current state of the Marvel Cinematic Universe. With Endgame ending the stories of some of the franchise’s most popular characters, Marvel is faced with having to fill the voids they leave behind and struggling with a fandom that might not be willing to give any replacements a fair shake. This happens to be exactly the problem facing John Walker, both inside and outside the MCU.

Intentionally or otherwise, Walker the ideal stand-in for where the studio is right now — he literally is a replacement for Captain America — and could be used to comment on the uphill struggle it faces as it tries to build a new MCU through Phase 4 and beyond. That would suggest that Marvel has long-term plans for John Walker as Captain America, however, which might not be the case.

After all, Walker didn’t keep the shield for long in comics, adopting the identity of U.S. Agent less than two years after he’d become Captain America. More importantly, there are clues that The Falcon and the Winter Soldier is setting Walker up for failure before the end of the series, whether it’s the use of the Power Broker as the series’ mysterious villain (the comic book Walker had ties to the Power Broker) or the simple fact that Walker is, you know, working in opposition to the heroes the show is named after, and therefore pretty much guaranteed not to come out on top in the long term.

To keep Walker as Captain America may be a bolder move than Marvel wants right now, especially given the reaction the character has enjoyed so far. (“Endured” could be a better word.) There’s something about having a flawed character represent America that could push fans’ buttons in the wrong way, or slip toward making the kinds of political statements the Disney-owned studio has carefully avoided for over a decade.

Despite that, there’s real value in allowing Captain America to make mistakes, not to mention being outright wrong, as the MCU continues to evolve — not least in shifting away from the traditionally America-centric focus of Marvel Studios’ brand ahead of the release of a more international slate of movies, from Shang-Chi to Eternals. It also allows Captain America to participate in the core Marvel idea of heroes that are as human as everyone else for the first time, creating more conflict with other heroes who dislike him in the process.

With John Walker wearing the red, white, and blue, Marvel has the opportunity to transform Captain America from an icon into a divisive and thought-provoking character. It could be just what Marvel needs… but are the studio and the fans ready for it?

More like this
Entertainment
Jan. 25, 2023
The MCU could bring back a hero from its most underrated TV show
By Dais Johnston
Entertainment
Feb. 3, 2023
Marvel just revived its primate assassin — What to know about Hit-Monkey
By Mónica Marie Zorrilla
Entertainment
Jan. 30, 2023
Doctor Who Could Become the New Marvel — But There's a Catch
By Ryan Britt
LEARN SOMETHING NEW EVERY DAY.
Related Tags
Share: