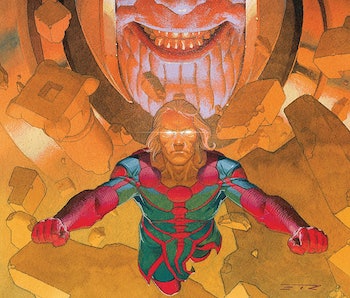 Marvel fans have waited an eternity to see Marvel’s Eternals. Apparently, one Marvel fan over on Reddit has already seen it — and they have spilled the beans about what they witnessed, with a full breakdown of the storyline as well as post-credits scenes that (naturally) set up the pieces for future Marvel movies.

Warning: Potentially huge spoilers for Marvel’s Eternals are below.

The News — On r/MarvelStudiosSpoilers, the forum’s moderators shared a plot breakdown of Eternals, the delayed science-fiction Marvel movie directed by Chloé Zhao (currently up for an Oscar for her picture Nomadland). The breakdown comes from an anonymous source, but it’s one whom the moderators believe has “undeniable evidence of factual information.”

“[A]fter several dives into this source's credentials, we have discerned that is a legitimate plot leak for November's Eternals,” the forum’s moderators write at the top of the post.

They add that the source has seen an early cut of the movie, which includes “unfinished FX, temporary music tracks, and probably scenes that will fail to make the theatrical version.” So, in short: these moderators trust the report, while couching that it may not land as the final version of the film. Whether you follow their lead is up to your discretion — but it’s worth reiterating that these details, if true, are hugely revealing for the November 5, 2021 release.

The Final Warning — So, here it is. One last chance to turn around before we get into some of the biggest spoilers. Once you cross the following Endgame gif, there’s no turning back.

With that out of the way, you can read the spoilers for yourself here, but we’re going to get into two of the biggest takeaways: the post-credits scenes, as per the leaks.

The Post-Credits Scenes — One allegedly focuses on Dane Whitman, the Marvel character known as Black Knight in the comics. Game of Thrones star Kit Harington is the actor in the role, and is at the heart of a post-credits scene, finding an old sword and hearing ominous words of warning to not pick up the blade.

Created by Roy Thomas and John Buscema in The Avengers #47, the Black Knight’s powers come from a mystical sword, called the “Ebony Blade,” which grants its wielders powers but also curses them.

In the comics, Dane manages to purge the curse temporarily with the help of Doctor Strange. Fun fact: The 2016 movie Doctor Strange created a prop of the Ebony Blade to include in the movie as an Easter egg. But the scene was dropped from the script before shooting began.

While an obscure character outside comic books, the Black Knight has been a member of teams like the Avengers and the Defenders. Though the Eternals spoilers reveal Dane doesn’t become Black Knight in the movie, the movie is essentially his origin story with the post-credits revealing the Ebony Blade in his possession. But who is the voice telling him not to pick it up?

Second, there’s another post-credits scene worth mentioning, in which we meet Thanos’ brother Starfox. (No relation to the video game pilot of the same name.)

Starfox is a superhero from the cosmic side of the Marvel Universe, and a member of the Eternals’ race. While Starfox looks more human (as most Eternals do), Thanos had Deviant genes, which gave him a more monstrous appearance. Starfox was created by Thanos’ creator Jim Starlin and first appeared in Iron Man #55 in 1973.

Here’s the thing with Starfox though: He’s kind of a creep. With the power to control people’s emotions, Starfox was accused of using his powers to seduce a married woman. This led to a twisty, courtroom storyline in Dan Slott’s She-Hulk, in which the title character was Starfox’s attorney. While Starfox was found not guilty (no thanks to false memories planted by his brother, Thanos), it doesn't clear Starfox’s reputation for being “a hero who is not above receiving rewards for the services he renders,” as Thanos testifies.

It will be interesting to know what the MCU has planned for a character like Starfox. Will the MCU heavily clean the character’s image, or will Starfox allow the MCU to explore difficult but thematically relevant subject matter? Stan Lee himself always said that the stories of Marvel are meant to reflect the world outside our window. In 2021, that might be more true than ever.

The Inverse Analysis — These post-credits scenes are obviously massively exciting for Marvel fans, setting up a ton of potential storylines moving forward. But they are, perhaps surprisingly, small-scale spoilers compared to some of the other things contained in the Eternals leak. For those who really want to know, check out the full Reddit breakdown, but do so at your own discretion. If the leaks pan out, the biggest Eternals twists are available to read online.