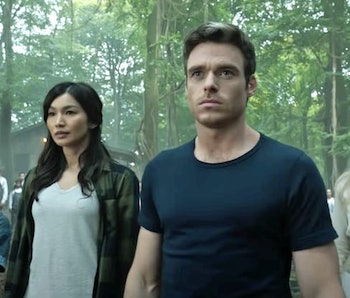 The MCU has seen its fair share of mythic and epic hijinks over the years. From Thor to Guardians of the Galaxy to Doctor Strange to Captain Marvel, there is no shortage of stories when it comes to examining the relationship between cosmic forces at large and the impact they make here on Earth. This special niche of the MCU is about to get even bigger with the arrival of the third MCU Phase 4 feature film set for release later this year, Marvel's Eternals.

We first learned about Eternals back in April 2018 when Marvel Studios head Kevin Feige admitted a film based on Marvel Comics icon Jack Kirby's The Eternals was in development. In the comics, the Eternals are a race of cosmically-powered beings created by the Celestials. They’re essentially immortal, which accounts for the name “Eternals.” Like the Asgardians, many of them are mistaken for gods in human mythology. Since Feige's confirmation, the Eternals hype has grown, with huge announcements, including the casting of Hollywood A-lister Angelina Jolie and Game of Thrones alum Richard Madden coming our way.

Here’s everything we know about The Eternals in terms of release date, cast, characters, story, and everything else you might need to know about what will no doubt be one of the most expansive, colorful, and offbeat MCU movies yet.

Who or what are the Eternals in Marvel Comics?

The Celestials are a race of godlike beings fans of the MCU should recognize. Star-Lord’s father, Ego, is a Celestial prominently featured in Guardians of the Galaxy vol.2. Jeff Goldblum’s Grandmaster is supposed to be another, but we never get the sense in Thor: Ragnarok that he’s a super-powered individual.

At the dawn of mankind in Marvel Comics, a Celestial called Nezarr the Calculator visited Earth and granted a certain number of prehistoric humanoids the ability to tap into a cosmic power that vaguely resembles the Infinity Stones.

Using that power, Eternals are able to augment their own life force, making them invulnerable and essentially immortal. Using psionic powers, they can manipulate matter at the molecular level to do almost anything. Power levels, specialties, and interests vary with the characters, but their immortality seems to unify them into some kind of strange family. Because their existence spans most of human history, their stories and conflicts could conceivably overlap with all sorts of human events.

What is the Eternals release date?

Eternals will be released on November 5, 2021. The release date was initially set to be back in November 2020. But with the COVID-19 pandemic shuttering theaters worldwide, Marvel Studios pushed back the film several times before finally settling on 2021.

Principal photography began on Eternals around July/August 2019, around the same time casting announcements were still being made for the movie. The filming on Eternals began at Pinewood Studios in England, but quickly moved to more international locations like the Canary Islands and Oxford University. Eternals cast member Gemma Chan confirmed filming had wrapped in February 2020 with a fun photo shared to her Instagram and Twitter.

Who is directing Eternals?

Like its parent company, Disney, and sister company, Lucasfilm, Marvel has lined up an intriguing director's slate for the first wave of Phase Four films. Following in the footsteps of Disney hiring Niki Caro to direct the live-action Mulan remake or Lucasfilm bringing Deborah Chow on board to direct episodes of The Mandalorian and the upcoming Obi-Wan Kenobi limited series, Marvel hired Chloé Zhao to direct Eternals. Zhao became a household name in the past year when her hit film Nomadland earned her an Oscar for directing, the second woman to do so, and the first woman of color to win the category.

Who is in the Eternals cast?

The official Eternals cast was announced at Marvel’s SDCC presentation in July 2019, with a few additions made at D23 in August. The cast lineup is as follows:

This is the MCU, after all, and the Eternals story is going to span centuries. As such, the chances are high a familiar face previously introduced into the MCU will show up or, at minimum, be referenced.

What is the plot of Eternals?

Marvel Studios released an official synopsis for Eternals back in 2020:

“Marvel Studios' The Eternals features an exciting new team of Super Heroes in the Marvel Cinematic Universe, ancient aliens who have been living on Earth in secret for thousands of years. Following the events of Avengers: Endgame, an unexpected tragedy forces them out of the shadows to reunite against mankind's most ancient enemy, The Deviants.

“The outstanding ensemble cast include Richard Madden as the all-powerful Ikaris, Gemma Chan as humankind-loving Sersi, Kumail Nanjiani as the cosmic-powered Kingo, Lauren Ridloff as the super-fast Makkari, Brian Tyree Henry as the intelligent inventor Phastos, Salma Hayak as the wise and spiritual leader Ajak, Lia McHugh as the eternally young, old-coul Sprite, Don Lee as the powerful Gilgamesh, Barry Keoghan as the aloof longer Druig, and Angelina Jolie as the fierce warrior Thena. Kit Harrington was cast as Dane Whitman.”

"The Deviants are an offshoot of the evolutionary process that created sentient life on Earth instigated by the alien Celestials, and wage war against their counterparts, the Eternals. According to the account of one Deviant in the 2006 mini-series, the Deviants were created as a delicacy to be consumed en masse by Celestials at periodic intervals once they multiplied sufficiently; however, the veracity of this has yet to be proven. While the Eternals possess godlike power and are generally physically beautiful (by human standards), the Deviants (who sometimes refer to themselves as ‘the changing people’) are for the most part hideous (again, by human standards), with each member of their race possessing some random physical and/or cosmetic mutation that is by Celestial design never repeated within the sub-species."

Feige also previewed some Eternals footage from CCXP, which Collider summarized in a brief report. The new footage included shots of Keoghan's Druig walking out in his armor and joining a team line-up; a blonde Jolie as Thena, wearing white and smiling at someone or something; Chan's Sersi and Madden's Ikaris holding hands by a fountain; Hayek's Ajak riding a horse into battle and, at another point, saying, "These people have changed all of us. We must protect them,"; and Nanjiani's Kingo wearing very colorful garb and surrounded by dancers in a Bollywood-style dance sequence (a fact recently confirmed by the actor in an interview on the New Hollywood podcast, via The Daily Dot).

We here at Inverse also reported on the CCXP footage and a possible Thanos connection thanks to even more comments made by Feige during his time on the CCXP stage.

"Thanos in the comics was an Eternal on Titan, so there may be connections. But really this is about introducing those ten new characters that are played by an incredibly eclectic amazing group of actors that we’re focusing on."

Previously, we reported on a possible plot leak listing Babylon 800 B.C. as a setting and time period. Other leaks indicate that Game of Thrones star Kit Harington plays archaeologist Dane Whitman, perhaps in the present day, who discovers evidence that the Eternals exist. This may or may not happen in a place called the Tomb of the Gods. Chan's Sersi might fall in love with Whitman. This forbidden love could serve as the central conflict in the story, or at the very least, play a major part. The whole thing is said to have ancient aliens vibes, according to Marvel Studios president Kevin Feige.

When Zhao was announced as director in September 2018, further details emerged that the film was a “love story between Ikaris, a man fueled by cosmic energy, and Sersi, who relishes moving amongst humans.” But, it seems like things have changed since then.

Is there a trailer for Eternals?

Yes! A teaser for Eternals was released in May 2021. You can watch it below.

Will Eternals connect to any other MCU Phase 4 movies?

Because the Eternals team has been around for centuries and have both watched and participated in important, history-making events both on Earth and across the universe, they're already integral to the MCU even though we didn't know it until now. As such, it's possible Eternals could do a little retconning and link them into past MCU events, like The Snap (referred to as "The Blip" by MCU characters) from Avengers: Infinity War.

As for the story being told in Eternals, it's hard to say if it will pick up on any ongoing threads in the MCU or help set up new conflicts. Given just how towering and cosmic these characters are, it's not outside the realm of possibility that they will help tease, say, the next big MCU villain's arrival or the next major stand-off between good and evil, similar to the way MCU Phases 1 to 3 helped set up and reveal Thanos' arrival and plan.

Does Eternals have a post-credits scene?

We still don't know! But really, we do.

This article was originally published on November 6, 2019