Captain America vs. U.S. Agent: Who wins? 'Falcon and Winter Soldier' may hold the answer

“Your concept of America and her ideals is as dated and obsolete as you are!” 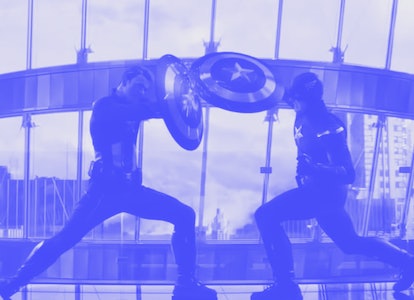 A man who stands for obsolete ideals... Steve Rogers has heard that one before, and plenty of variations of that same critique, numerous times over the years. But few men’s words have sucker-punched Captain America quite like those of John Walker.

That’s because Walker, Marvel’s former Super-Patriot turned Captain America turned U.S. Agent, isn’t simply another one of Cap’s rogues. He’s a hero to a very real and vocal side of America, one that Rogers wishes didn’t exist but does nonetheless. John Walker is every bit as American as Steve Rogers, and that’s an ugly truth.

Although audiences (probably) won’t see Chris Evans’ Steve Rogers face off against Wyatt Russell’s John Walker in The Falcon and the Winter Soldier, the government-backed “new Captain America” is certain to create plenty of challenges, both physical and moral, for Sam Wilson (Anthony Mackie) and Bucky Barnes (Sebastian Stan). How they’ll fare is another story, but since Steve won’t be able to do the honors of landing a blow on that all-too square jaw himself, an Inversus battle will have to determine how these two super soldiers fare against one another in an all-out battle for the stars and stripes.

Standing at a statuesque 6’2 and weighing in at 220 pounds, Steve Rogers is a super-soldier who represents America at its best. He stands for the people, rather than the government, which often puts him at odds with bureaucratic politicians.

Injected with a super-soldier serum to become the face of the Allied efforts during World War II, Steve Rogers was suspended in ice for several decades after a failed mission to apprehend Baron Zemo I. Found and reawakened by the Avengers, Steve Rogers became a man out of time in a world that had changed in many ways, yet still faced the threat of tyranny.

Steve Rogers first appeared in 1940’s Captain America Comics #1, 71 years before he made his MCU debut in Captain America: The First Avenger. As leader of the Avengers, Captain America has inspired generations of heroes both in the pages of comics and onscreen.

Steve’s powers consist of peak human strength, speed, agility, durability, reflexes, and stamina. The super-soldier serum also granted him advanced longevity. He’s the perfect human specimen, but all of that would be mostly meaningless if he hadn’t also conditioned his mind, become a master tactician and an expert in the martial arts, shield training, sword fighting, marksmanship, and acrobatics. There doesn’t exist a more perfect soldier.

Standing at 6’4 and weighing in at 270 pounds, John Walker is a right-wing, conservative Christian who embodies the dangers of blind patriotism. He idolizes the American government, to the point where he’s willing to be its lapdog.

Granted powers by the mad scientist Dr. Karl Malus, Walker, a former U.S. Army veteran who never became the war hero he wanted to be, originally set out to become a professional wrestler. Substituting one delusion of grandeur for another, his agent convinced him he should try out the superhero gig instead.

Dubbing himself Super-Patriot, Walker set himself apart from Captain America by claiming he stood for the country’s true ideals. Staging attacks to make himself look like a hero, he ran afoul of Captain America but won the public’s admiration when he killed the terrorist Warhead.

When Steve Rogers abandoned the role of Captain America, not wanting to serve as the government’s lackey, Walker was appointed as his replacement by the Commission on Superhuman Activities, which was secretly run by Red Skull. A fight against Captain America awakened Walker to his manipulation by the Red Skull, and he joined Steve in taking the Hydra villain down.

First appearing in 1986’s Captain America #323, and later making his MCU debut in The Falcon and the Winter Soldier, Walker eventually gave Cap his uniform and shield back. He then took the name U.S. Agent, becoming a member of the West Coast Avengers, though his right-wing ideologies and PTSD caused his teammates a fair share of unease, and issues down the line.

Walker possesses superhuman strength, stamina, agility, reflexes, and durability. He’s a master combatant, having been trained by the Taskmaster. What he lacks in Steve Rogers’ experience he makes up for in his brutal methods. If the mission is “kill or capture,” Walker will kill. And if lethal actions aren’t permitted, well, he’s gonna make sure it hurts plenty.

Captain America #327 (1987): In their first fight, John Walker beats Steve Rogers. Rogers calls it a draw but admits he’s never been so close to losing or so relieved when a fight ended.

Captain America #350 (1989): Steve Rogers, clad in a new black outfit and going as “The Captain,” defeats John Walker, who had taken up the mantle and uniform of Captain America. Steve reclaims his honor.

Avengers: The Terminatrix Objective #2 (1993): Steve Rogers beats Walker again in a close call. Rogers relies on his tactical skills to make up for Walker’s brawn.

Captain America #16 (2019): In their most recent fight, Rogers wins again, but (arguably) only thanks to an assist from Misty Knight, who holds the disgraced Walker in a stasis field.

Two soldiers stand apart on the grounds of the Washington Monument: Captain America on the left, and U.S. Agent on the right.

They’ve been here before. They’ve fought this fight before. But this time, it’s different. This time, everything is on the line. The battle between the left and the right threatens to tear the whole country apart, and only one man can lead America into the future.

“It’s not over yet,” Cap says. He throws his shield. Agent does the same, and they collide in the air before ricocheting off to the side. Cap lunges to retrieve his.

“If you want to fight me, fight me like a man,” Agent says. “No shields. No armor.” He removes his helmet and waits a beat for Cap to do the same. The two men look at each other. So similar on the surface, but their hearts beat very differently.

Walker charges like a bull. Rogers stands his ground, meeting the impact of his adversary and feeling the first rib crack. He knows he’ll have to play this carefully if he wants to win. Using Walker’s momentum against him, Rogers flips the younger soldier over his back where he lands on the ground. Quickly, Walker rolls, avoiding Rogers' next blow.

Walker lands a hard kick into Rogers’ chest and feels something pop. “Not much of a soldier without your shield, are you?” Walker gloats.

Rogers rises, hand clasped over his broken ribs. “I can do this all day.” He steadies himself and, instead of using the arm Walker is expecting him to lash out with, he swings with the one that had been clutching to his injured abdomen mere moments ago. Rogers hits hard, shattering Walker’s nose before using his other hand to land an uppercut that removes several of Walker’s teeth.

Walker spits, blood running down the lower half of his face, and grins. He looks down and sees his shield next to him. Despite their established rules, he picks it up and throws it at full force at Rogers. The force and the lack of distance would have killed an ordinary man. But Steve Rogers is no ordinary man. Still, he feels his sternum break and his lungs grow tight. He can taste the blood in his mouth. But he’s not done. He picks up the shield and tosses it away. He doesn’t need it to do what needs to be done.

Mustering all of his strength, Rogers lands a heavy boot into Walker’s kneecap, shattering the bone and leaving the other man crippled, unable to rise.

Steve limps away from his adversary, slowly, and painfully.

“Come on, Cap, finish it! Finish it!” Walker cries out to him.

Steve Rogers barely escapes with his life. He tells himself it was skill that saved him, though the longer these fights between him and John Walker continue on, the less sure of that he is.

Walker would’ve killed him. He still may, one day. But Rogers knows why he has to spare his old enemy — because there’s no defeat more humiliating for Walker than losing, and having to live with it.

Steve Rogers knows this won’t be the end, but he also knows men like Walker aren’t scarce. They may not have his skills, but they have his beliefs. Keeping John Walker alive is more than a means to humiliate the man, but a tactical maneuver so that Rogers can keep tabs on America’s worst instincts and prevent them from swallowing him up as well.

Steve Rogers lives, and so does John Walker lives — battered, bloody, and willing to do it all again for what they believe. That’s the American way.