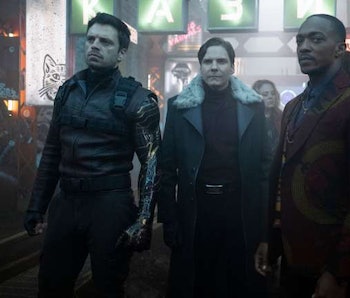 One of the most interesting tropes in superhero media is the lack of superheroes altogether. The absence of Superman is how Justice League starts. The death of (one version of) Spider-Man is what prompts Spider-Man: Into the Spider-Verse. Even The Incredibles starts by establishing the erasure of superheroes.

The Falcon and the Winter Soldier feeds into this by focusing on the absence of Captain America — and in doing so, creates Marvel’s answer to The Suicide Squad.

In The Falcon and the Winter Soldier, Bucky and Sam aren’t in prison, but they certainly aren’t where they want to be. Sam is using his powers to assist the military with some missions, but then returns to find his family’s legacy — a fishing boat — in disrepair. Bucky is going to court-ordered therapy, but all the while experiencing PTSD flashbacks and seeking revenge. They’re both in need of a greater cause to fight for, even if they don’t know it.

In The Suicide Squad, a group of imprisoned antiheroes is forced into a mission. This isn’t something they are seeking, merely part of their punishment, but they work together nonetheless. Just like Sam and Bucky, they don’t get along, but they put their differences aside and come together. It’s the eternal story of the unlikely team-up movie.

The similarities get all the more striking throughout The Falcon and the Winter Soldier. Characters who were only shown for a few scenes like Baron Zemo and Sharon Carter are finally given some room to breathe, not as “villain” and “love interest,” but as people. Yeah, Zemo is still probably evil, but at least he’s evil in style. Look at him dance!

Sharon is almost overcompensating for her previously damsel-lite appearance, holding countless bounty hunters at bay while Bucky and Sam work on extracting info from Dr. Nagle. She may not be going full Harley Quinn, but it’s certainly refreshing to see a woman be badass not because she has a crush or being selfless, but simply because she wants a pardon and was promised one. She’s looking out for herself only.

Even though The Falcon and the Winter Soldier is a show about superheroes, it’s really a show about criminals. Bucky is arrested for not attending his therapy, Sharon can’t leave Madripoor because of her past, Zemo needs to be broken out of prison in order to help track down the Power Broker. We’re not supposed to look up to these characters. We’re supposed to relate to them.

While the tone may be entirely different from The Suicide Squad, the emotional core is the same. These are people who are down on their luck, and participating in their mission not because they want to, but because they have to, whether as part of a sentence or to prevent the real “superheroes” from messing it up. It’s a timeless story told two ways, and one that’s necessary to counteract the hero glorification we see in many other stories. Hopefully, it continues in the future.