'Spider-Man: Into the Spider-Verse' director has a surprising spinoff idea

“That could be super fun.” 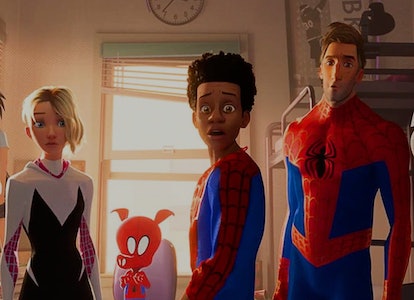 Spider-Man: Into the Spider-Verse disrupted the familiar Spider-Man ethos by introducing fans the world over to a multiverse storyline that mashed-up a whole array of different spider-themed heroes -- from Spider-Gwen to Spider-Ham -- into one terrifically engaging Academy Award-winning feature film. Obviously, fans are thirsty to know what will come next.

Two years ago, producer Phil Lord revealed that Japanese Spider-Man will be in the next installment. Talk about an eyebrow-raising detail. But how exactly will the Manga-style character fit into the story? Co-director Peter Ramsey doesn't necessarily have the answer to that question. But he's got thoughts.

"That whole movie was about how things are so different and then, yet, at the core, there's that one thing that makes them similar," Ramsey tells Inverse. "So honestly, when it comes to Spider-Verse, I don't think it matters how different any version of the character could be as long as there's that little lifeline back to the essential part."

The multiverse as a storytelling tool blew the doors off of the superhero movie narrative, unleashing a variety of animation styles, unexpected storylines, and interesting heroes for the audience to latch onto. In fact, the flick went in so many different directions, it's hard not to ask the question: What characters should get their own spinoff?

"We used to talk a lot about the early years of Aaron and Jeff in the '90s back when those two were running the streets together," Ramsey continues. "Spider-Verse: The Early Years, before there were any spiders involved. Young Aaron and Jeff, that could be super fun."

Peter Ramsey made history as the first Black person to win an Oscar for Best Animated Feature. And when it comes to the notion of a character's decline and fall, he's well-versed on the subject. His is one of many stories featured in the inspirational Faceplant video series over at Million Stories. And as he explains, it is just one more important step on the path to success.

What does the future will hold for the Spider-Verse heroes? We can only speculate. But one thing we can all agree on is the need for more Spider-Ham in the world. If ever there was a character in need of a spinoff, it'd be him.

"Honestly," Ramsey says, "I'm kind of surprised they haven't done it yet."