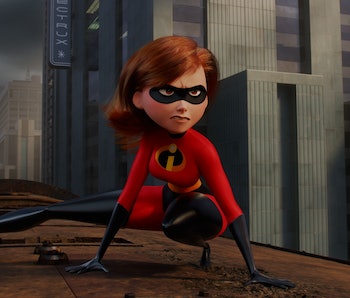 Incredibles 2 is fantastic — it’s probably the most visually exciting superhero flick you’ll ever see, but it still can’t top the first Incredibles, which is arguably Pixar’s best. For a moment, though, it seems like it has the potential to do just that.

It doesn’t have to be that way. Perhaps the most astounding thing about the Marvel Cinematic Universe (probably the best comparison when it comes to superhero cinema) is that the movies keep getting better, which isn’t typically how sequels work. Sure, there are people who will always put Iron Man or Captain America: The First Avenger at the top of their ranked lists, but superhero movies do have the potential to improve as the franchise continues.

Pixar’s Incredibles 2 is only, as the name suggests, the sophomore film in the series. It’s not just another superhero movie. It’s a new Incredibles movie, a 14 years later follow-up to one of the all-time greats. The stakes are higher, and the comparison starker.

The film flirts with some bold, meaty themes that could’ve matched the original’s nuanced portrayal of marriage, warts and all. Unfortunately, that plot thread gets pushed aside unceremoniously so Incredibles 2 can be a more straightforward action movie, though, it still has gobs more heart than most blockbuster sequels do.

Even though a decade and a half has passed in the real world, Incredibles 2 kicks off right where the first movie ended. The family bands together to take down the Underminer, and let’s just say their heroic efforts result in a mixed success.

Superheroes are still illegal despite their victory in the first film. However, a charismatic tycoon named Winston Deavor (Bob Odenkirk) has a plan to get some great PR for Supers and use that to make heroics legal once again. The first step of this plan involves making Elastigirl (Holly Hunter) the public face of Supers — and not Mr. Incredible (Craig T. Nelson).

This is where Incredibles 2 takes the most risks. Mr. Incredible doesn’t like being looked over in favor of his wife. He can’t help but begrudge her success and resent the opportunity she has while he’s stuck at home taking care of the kids. And, yet, he loves and wants to support her. It’s a role reversal from the first film, and seeing Mr. Incredible grapple with these ugly feelings or watching the husband and wife duo get into a big fight at the dinner table because they disagree on how to raise the kids is the most interesting material the film has to work with.

Moments like these are what make the Incredibles, like their clear conceptual ancestors the Fantastic Four, such interesting characters. They’re superheroes, yes, but they’re also a family. And sometimes families fight. Often, actually.

Unfortunately, that raw, all-too-real plot runs the risk of making Mr. Incredible pretty unlikeable, so the marital strife and emasculated sniping is largely handwaved away halfway through the movie once the new supervillain, the Screen Slaver, starks wreaking chaos. Mr. Incredible and Elastigirl never quite have a moment of emotional catharsis or come to grips with the implications of these very human feelings because they’re too busy being superhumans.

That’s okay, though! Perhaps it’s unfair to want Pixar to make a feature-length marital counseling film. Incredibles 2 is a true all-ages movie, which means that even though it can grapple with some mature themes, kids still need to be able to enjoy it. Adults will enjoy Incredibles 2 as well, because even if the second half isn’t as deep as the first part, it’s a blast.

Incredibles 2 takes full advantage of being animated as the non-existent “camera” whips around action-packed set pieces in a thrilling chase scene with the same fluidity and panache as Elastigirl herself. The mid-century modernism aesthetic that made the first film’s visuals so distinct and memorable has been pushed even further here. A new Super with electric powers blasts out crisp bolts of lightning. Elastigirl has a desperate struggle with the Screen Slaver inside a hypnotic LED prison. It’s exhilarating art.

It’s hard to knock Incredibles 2. It is, after all, the long-awaited sequel to a prime contender for the title of both Best Pixar Movie and Best Superhero Movie. That it gets into an especially groovy groove in the back half and settles for being a fantastic sequel rather than pushing some difficult boundaries is understandable. It’s a great flick, but there’s a hint that we could have had a truly incredible movie instead of just an Incredibles movie.